On Thursday, President Joseph Biden was in Syracuse to speak about the Micron Technology Inc. computer chip fab plant that will be built in Clay. 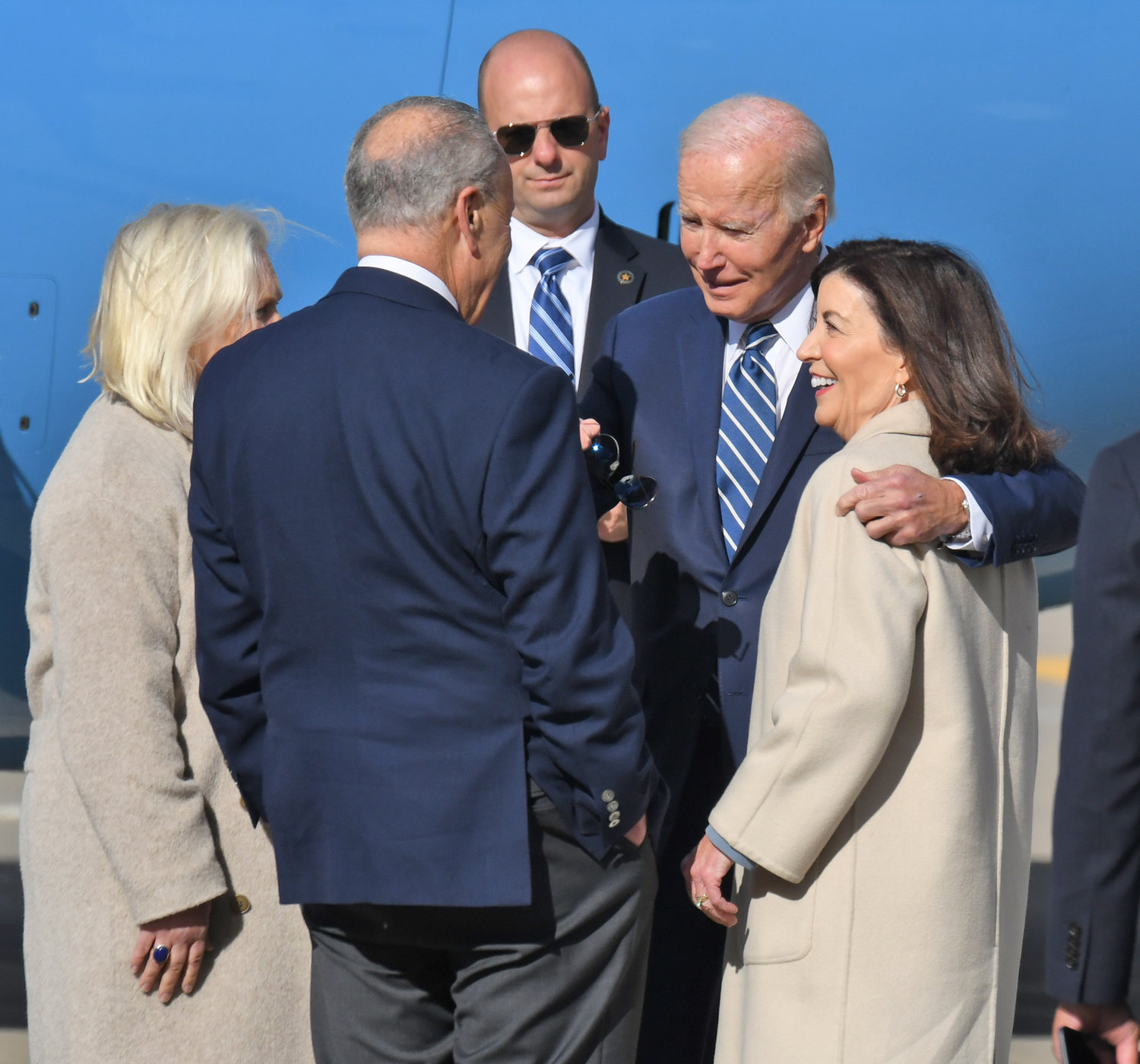 WELCOME WAGON — President Joseph Biden chats with U.S. Senators Kirsten Gillibrand and Charles E. Schumer, and Gov. Kathy Hochul at Syracuse’s Hancock International Airport during his visit visit to Syracuse on Thursday, Oct. 27. Biden was to spend about four hours in Syracuse, speaking at Onondaga Community College about Micron Technology’s plans to invest up to $100 billion in a computer chip fabrication complex in Clay, a Syracuse suburb.
(Sentinel photo by John Clifford) 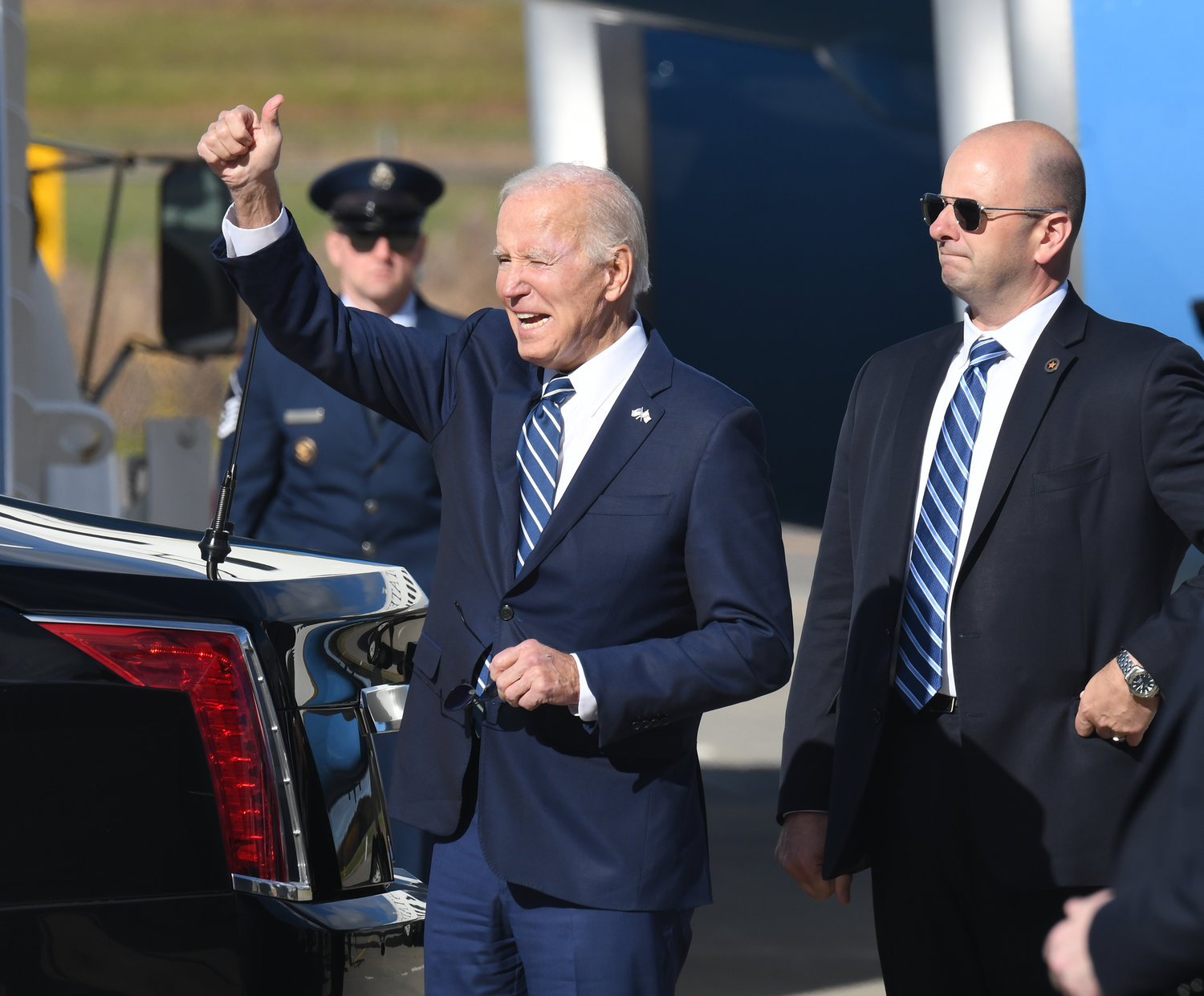 GREETINGS — President Joseph Biden waves to family and friends gathered at Syracuse's Hancock International Airport to welcome the 46th president of the United States upon his arrival to Syracuse on Thursday, Oct. 27. Following his arrival on Air Force One, Biden was wisked away in a large motorcade from the airport down Route 81 as he headed to Onondaga Community College to discuss the new Micron factory and its impacts on upstate New York and the nation. With Biden is a member of his security detail.
(Sentinel photo by John Clifford) 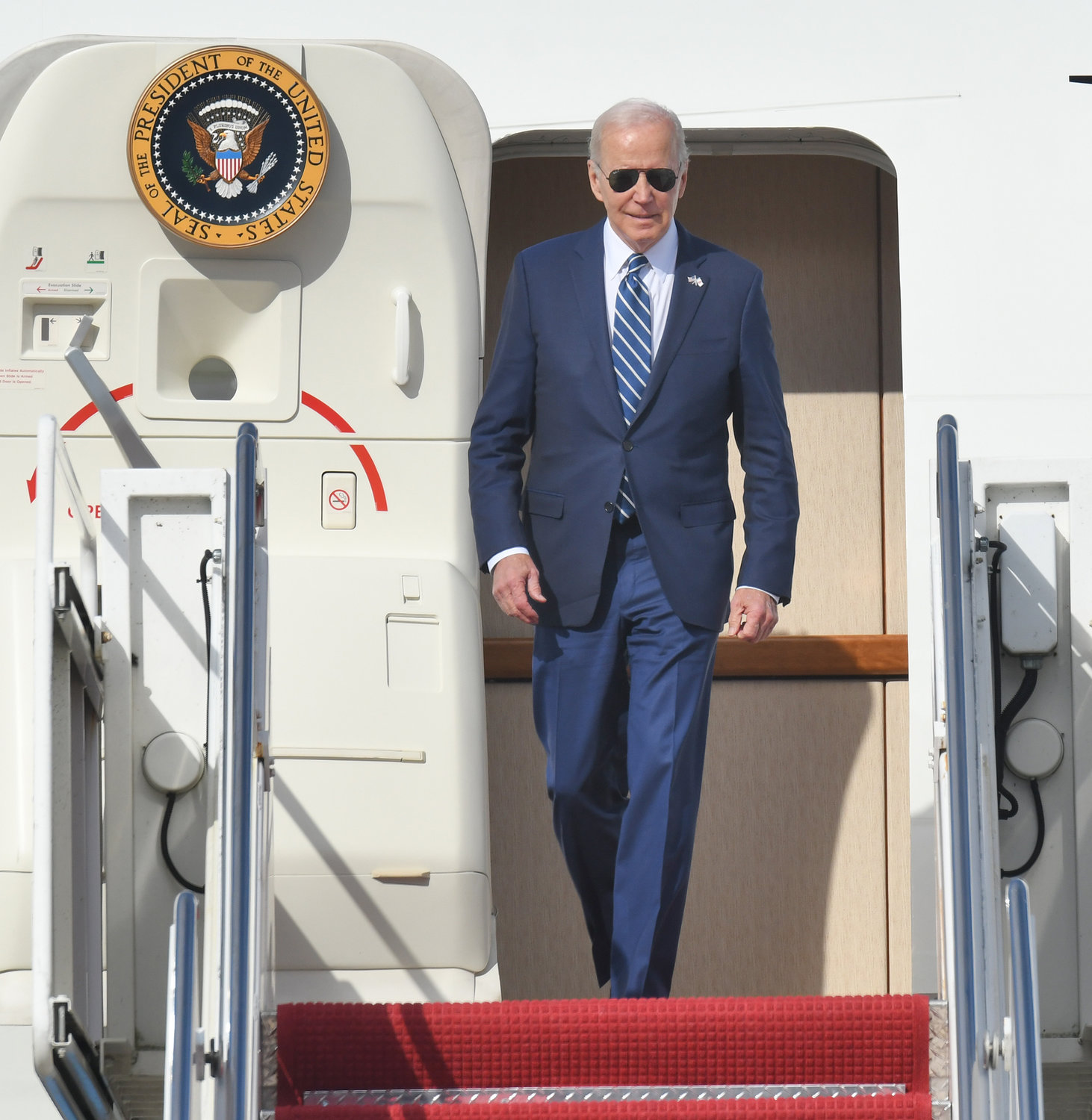 BACK IN TOWN — President Joseph Biden steps off Air Force One at 2:05 p.m. at Hancock International Airport on Thursday, Oct. 27, to begin his stop in Syracuse. Biden lived in Syracuse while attending the Syracuse University’s College of Law, receiving is juris doctorate in 1968. Biden has returned to Syracuse University on many occasions, including to speak at the College of Law commencement exercises in 1994, 2002, 2006 and 2016 and the university’s commencement ceremony in 2009.
(Sentinel photo by John Clifford)

TOUCH DOWN — Air Force One — with President Joseph Biden aboard — taxis after it landed at 2:05 p.m. at Hancock International Airport on Thursday, Oct. 27. From the airport, Biden traveled to Onondaga Community College via motorcade, where he was to speak about Micron Technology’s planned $100 billion chip fab plant in the region. Micron officials have said that the federal and state incentives were instrumental in its decision to locate a facility in New York.
(Sentinel photo by John Clifford) 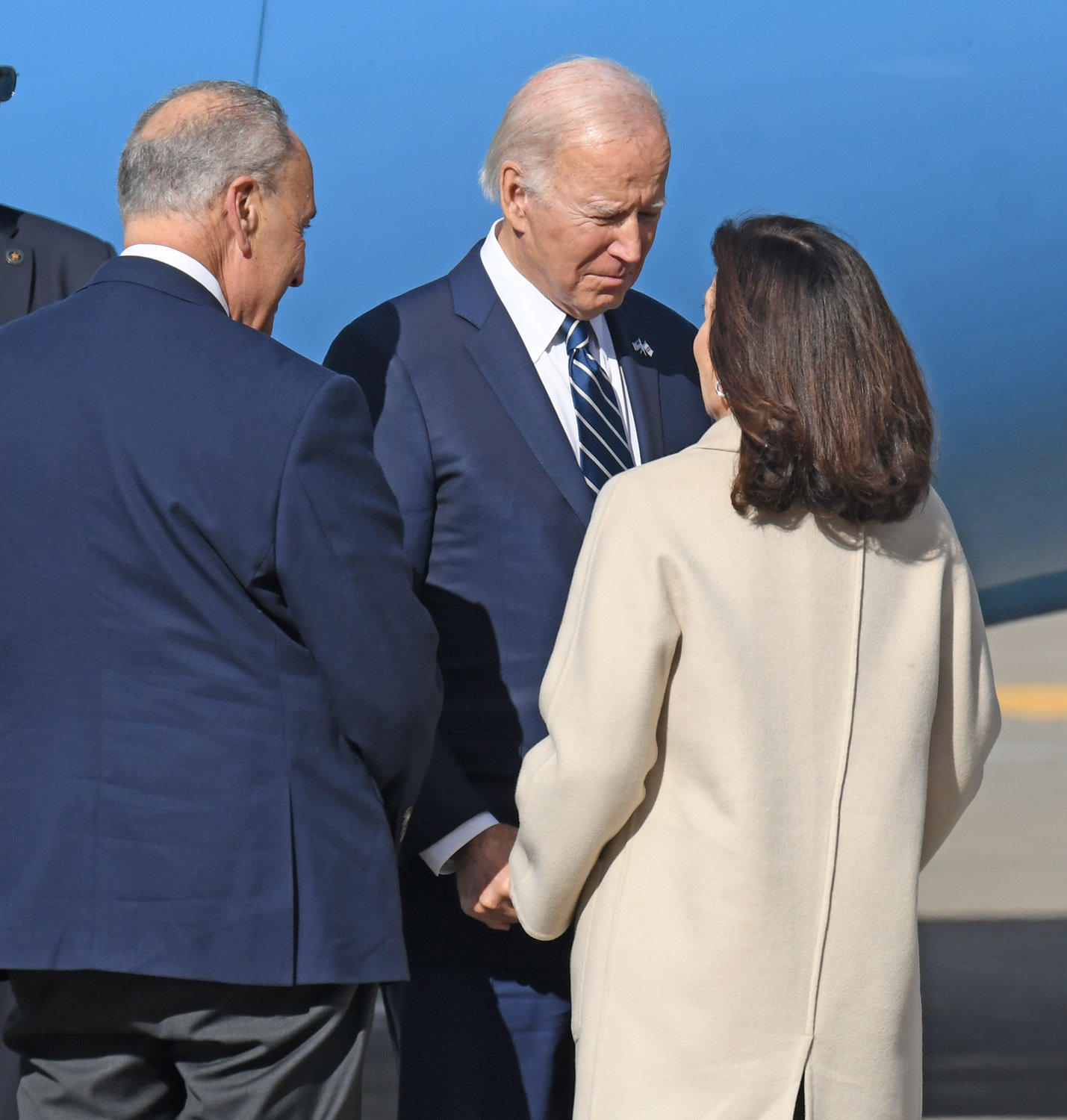 "We’re competing again," said President Joseph R. Biden Jr. at a Thursday stop at Onondaga Community College. "Where is it written that the United States can’t be the manufacturing capital of the world?"

Biden was in Syracuse to speak about the Micron Technology Inc. computer chip fab plant that will be built in Clay. In an Oct. 4 announcement, Micron  released it would be opening a semiconductor plant at White Pine Commerce Park.

In the Thursday visit, Biden was joined by U.S. Senators Charles "Chuck" Schumer and Kirsten Gillibrand, New York Gov. Kathy Hochul, Micron President and CEO Sanjay Mehrotra, Onondaga County Executive Ryan McMahon and others, celebrating the news. All this, in the wake of Biden's August signing of the CHIPS and Science Act into law which promised $52 million in incentives to businesses to build semiconductor plants in the U.S.

The Micron project is expected to bring 50,000 jobs to New York, and the company will be investing $20 million this decade and $100 billion over the next 20 years in manufacturing.

During the Thursday Biden visit, Mehrotra spoke about the chips themselves. He said that in Clay, the chip fab facility will manufacture almost 4 billion chips per year. And,  in additional remarks, dug deeper on the significance of the precision semiconductor manufacturing that will take place at the fab.

Manish Bhatia, executive vice president of global operations for Micron, spoke about the importance of memory and how it’s found in every computing device. He said that Micron is the only American memory manufacturer.

"Whether it’s the PC on your desk, the smartphone in your pocket, the data centers that power our world, … all of them need ever-increasing amounts of memory to be able to perform to the levels that we’re continuing to challenge them to," Bhatia said.

He said one of the reasons why Micron chose Clay is because of the history of semiconductor manufacturing facilities in upstate New York.

Wolfspeed is a silicon carbide fabrication facility that is closer to home for Oneida County residents, as it opened on April 24 in Marcy. Following the Micron announcement, Schumer spoke about his goal of the construction of another semiconductor manufacturing facility in Marcy.

On Friday, Oct. 28, Oneida County Executive Anthony J. Picente Jr. said that in some ways, Wolfspeed settling in Marcy set an example for the Central New York region and for the state.

He said that Micron's settling in Clay will be very beneficial, in terms of employment, but also by shining a spotlight on the Marcy Nanotechnology Center for further development.

"When it comes to supply chains or other fabs that are looking for land, obviously Marcy is in the forefront of that discussion," Picente said.

He said that both Wolfspeed and Micron settling in Central New York shows that the area is an attraction, in terms of land, workforce and education, with SUNY Polytechnic Institute also located in Marcy.

"There's a lot of land out there across the county, and everybody has land. It's about, can we attract a workforce to these areas? And I think it says a lot about this industry, and the ability for these companies to land the workforce they need in this area," Picente said.

Schumer emphasized the importance of bringing manufacturing jobs back to America and ending the dependence on foreign-made chips.

"The word to describe this moment is transformational," Schumer said.

"Transformational can describe now what is happening here in Syracuse, in Upstate New York and in America."

Hochul said that Micron’s investment is revitalizing and bringing back hope to upstate New York.

"That’s how we build a New York dream and it’s happening before our eyes," Hochul said.

April Arnzen, senior vice president and chief people officer for Micron, spoke about Micron’s investments in Central New York, which includes a $500,000 sponsorship for the Museum of Science and Technology, which is located at 500 S Franklin St. in Syracuse, and will have a long-term exhibit for students and families to learn about semiconductors through interactive, hands-on experiences.

Arnzen also announced that Micron will be investing $500,000 in the YMCA of Central New York to support quality childcare and childhood learning.

“One thing I like about President Biden is that he understands the value of workers in the United States, and as workers, we’ve always stepped up to help our communities and our country, and that the workers and unions of this country should be respected,” Davis said.

President Biden emphasized the importance of labor unions and praised Micron for employing workers from 20 unions to staff the facilities, making it the largest investment in American history that is also governed by American labor unions.

He also spoke about bringing jobs back to American shores and making the U.S. a leader in chip manufacturing. Biden said that Micron’s investment will increase America’s chip production by 500 percent.

"Making these chips in America is going to help lower the cost for families looking to buy a car, replace your washing machine or get a new cellphone," Biden said. "It also helps companies out compete the rest of the world."

Biden also touted his accomplishments during his time in office, like how gas prices are decreasing, unemployment is 3.5 percent, at its lowest in 50 years and that over 5 million Americans have applied to start small businesses.

The president also took the time to call out "MAGA Republicans" who are looking to cut social security and Medicare, and want to repeal the Affordable Care Act.

President Biden said that America’s best days are ahead of us, and that the investment in the Micron plant just proves it.

"I’ve never been more optimistic in my life about America's future. Not because I’m president, but because we have entrepreneurs and people who know what they’re doing to lead us into a completely different era. … I look out at the younger generation. It’s the best-educated generation, the least prejudiced, the most engaged, the least self-serving generation in American history. I hope you feel what I feel standing here today: pride."