A fifth grade class at Bellamy Elementary School spent today harvesting its crop of micro greens. The program was a collaboration with SUNY Poly student Christina Carambia of Rome with help from … 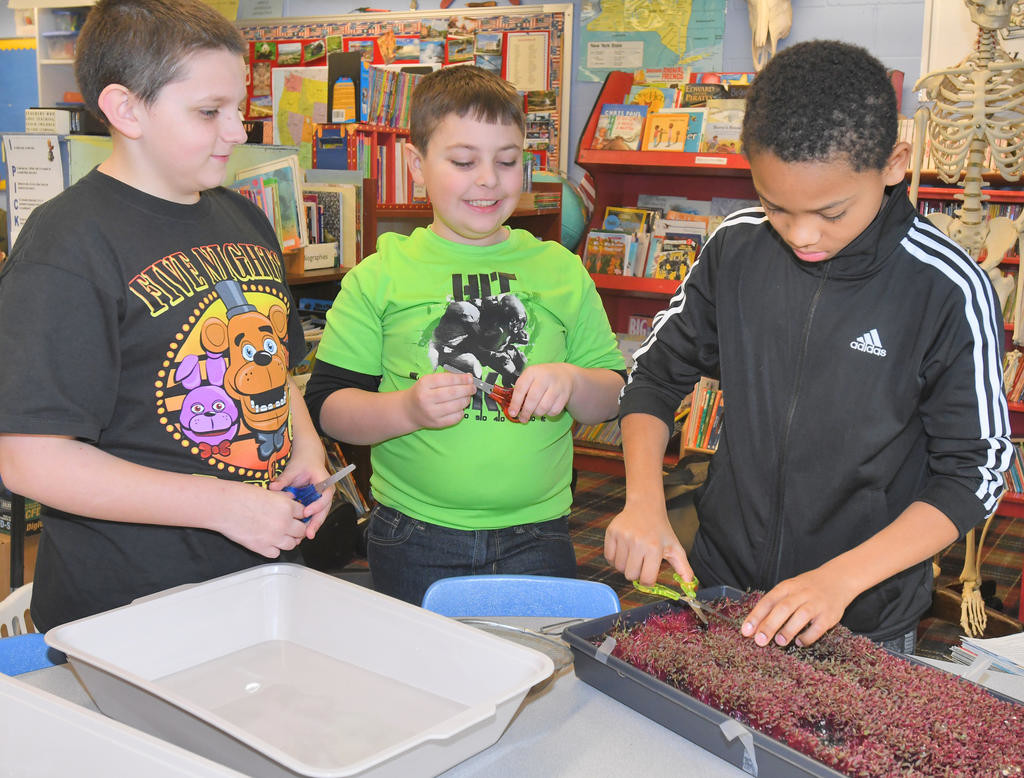 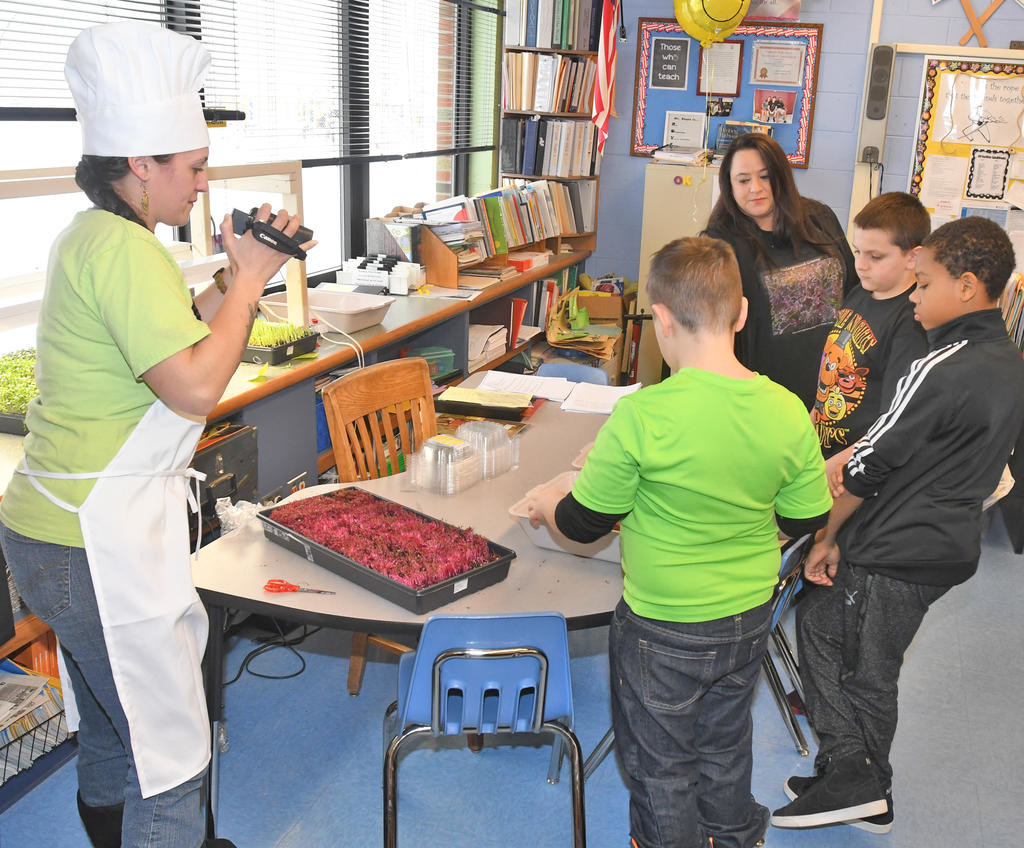 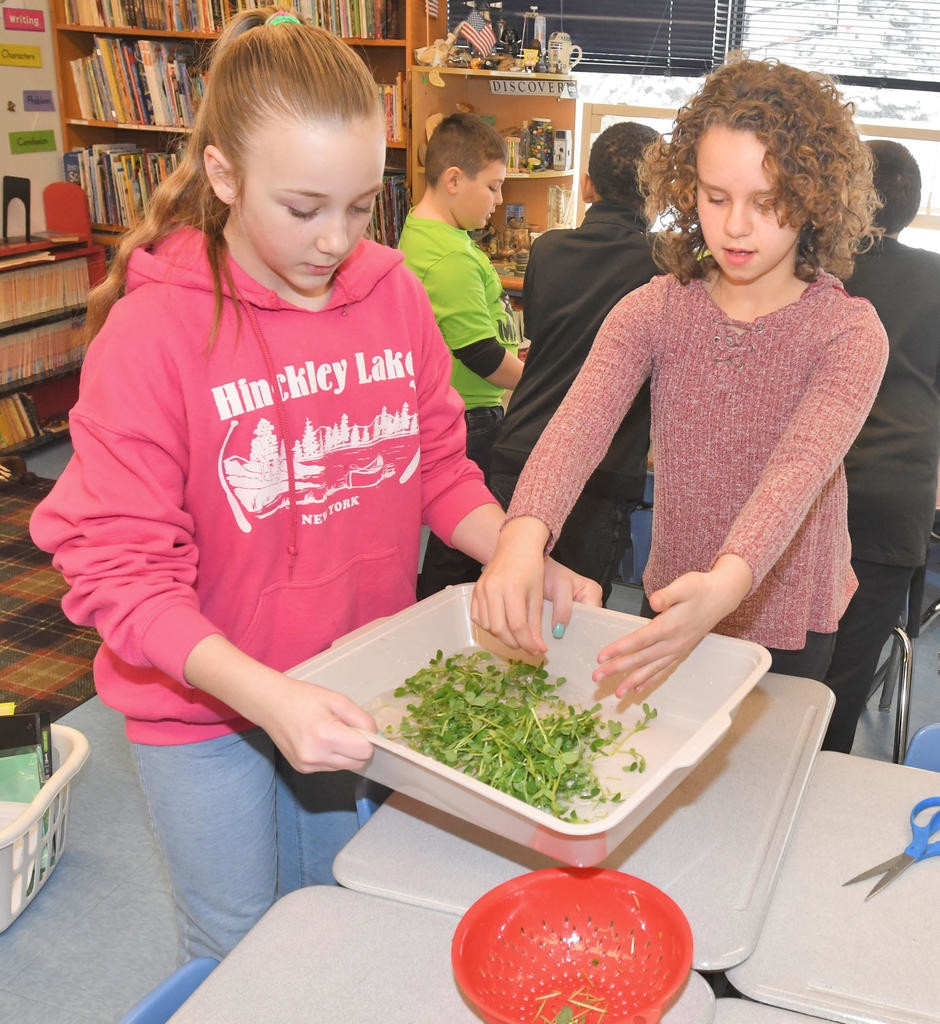 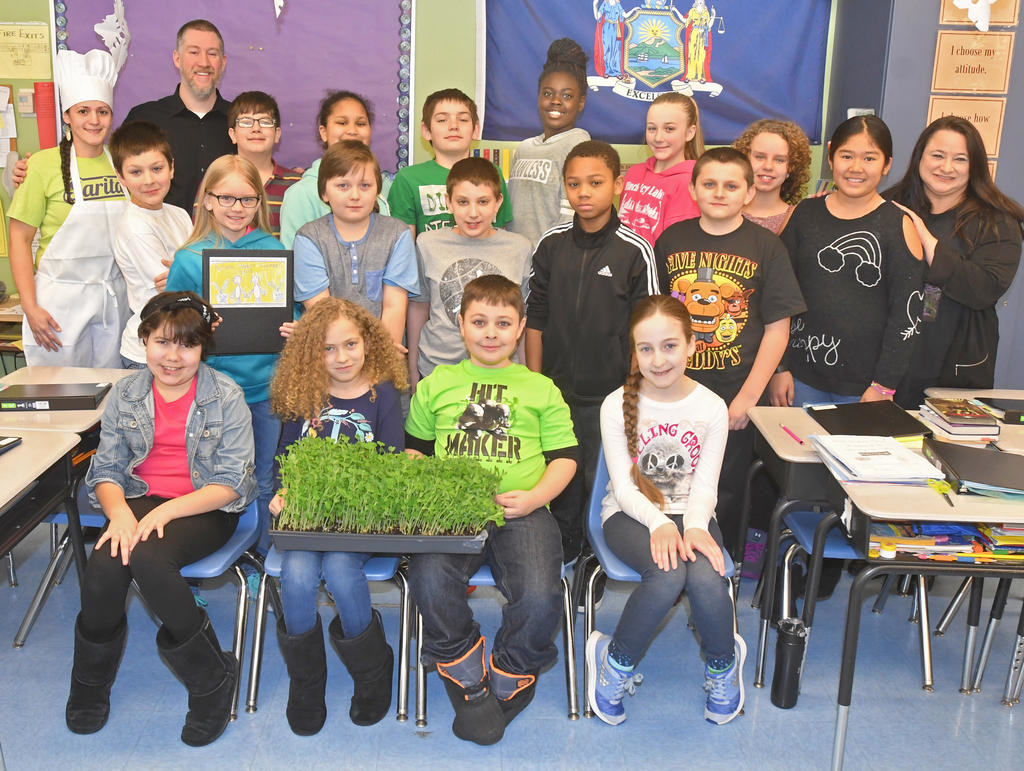 FINAL PRODUCT — Scott Royce and his fifth grade class at Bellamy Elementary School show off one of their beds of micro greens sweet peas today on harvest day. With them are Sarita Ruiz, back row left, and Christina Carambia, back row right. Carambia proposed the program and brought along Ruiz, who runs Sarita's Food Truck, to explain how she prefers local, natural ingredients. (Sentinel photo by John Clifford)
Previous Next
Posted Tuesday, March 13, 2018 4:10 pm
Steve Jones, Staff writer

A fifth grade class at Bellamy Elementary School spent today harvesting its crop of micro greens. The program was a collaboration with SUNY Poly student Christina Carambia of Rome with help from Sarita Ruiz, owner of Sarita’s Food Truck.

Carambia reached out to teacher Scott Royce to ask if he would be willing to collaborate on developing a produce program for elementary students. Royce agreed, and after meeting with the Bellamy Steam Team, the two collaborated on a program that would satisfy both of their academic goals, she said.

Carambia is majoring in interdisciplinary studies. She has associate’s degrees in both horticulture production (SUNY Morrisville) and business management (Mohawk Valley Community College).

She is also the owner of a start-up business called Underground Greens; a year-round, non-GMO farm for plants and produce. The business plan for Underground Greens finished in third place in the Clean Energy track at the New York Business Plan Competition in 2015 and 2016, as well as first place both years at the Mohawk Valley Regional competition. The elementary school micro green production plan corresponds with Royce’s fifth grade curriculum, with respect to the plant science portion, she said.

The project integrates Carambia’s fields of studies — agriculture, business and marketing — with Royce’s teaching expertise, with guidance, critique and support provided by Dr. Kristina Boylan, professor at SUNY Poly. Carambia said she hopes an all-around interdisciplinary approach will create a successful program model that will gain the interest of more young entrepreneurs. “I hope to change the perception of being a farmer from an average job to extraordinary career. Farming isn’t just tending livestock and planting seeds. It has become a challenging, exciting, industry where innovation is key to a successful farm. Employment opportunities are growing in this industry sector and include disciplines outside of the skills traditionally associated with farming, like software development, interactive media, and engineering new mechanized agricultural tools. For example, drones, robots, and clean energy systems are all tools that future farmers will need to continue to develop to ensure a sustainable food system for generation to come. I believe that exposing young people to agriculture, business, and marketing in a well-rounded, interdisciplinary manner will inspire new ideas that would not occur if the students were introduced to the disciplines one at a time. It’s the synergy of the combined disciplines that make this program unique.”

The students learned to sow, grow and harvest five flats of micro greens over the course of three weeks. The flats, seeds, sowing medium, lighting, label and a work packet were provided by Carambia to Royce’s class.

The students were introduced to the topic on launch day, when Carambia brought a guest to class, Sarita Ruiz, owner of Sarita’s Food Truck and SUNY Poly alumnus. Ruiz, decked out in chef’s gear, spoke to the class about the importance of using fresh, local produce in her
recipes.

Carambia asked the class if they would be willing to create a mini farm in their class to produce fresh ingredients for Ruiz, and the class agreed. Carambia and Royce presented a crash course on agriculture, business and marketing over a few weeks, and the class harvested and packed fresh greens with their own label today.

The skills and information learned during this time will prepare the students to initiate more advanced plant production activities, such as tomato plant and produce production, for which Carambia aims to find funding. She provided the initial supplies.

The class sold some of its produce to Ruiz, and Carambia said she hopes that the program can become sustainable and that with the proper approvals the class could even continue to sell the fruits of its labors.

The logo for the Bellamy Student Farmers 2018 program was designed by Hailey Burns, a student in the class.