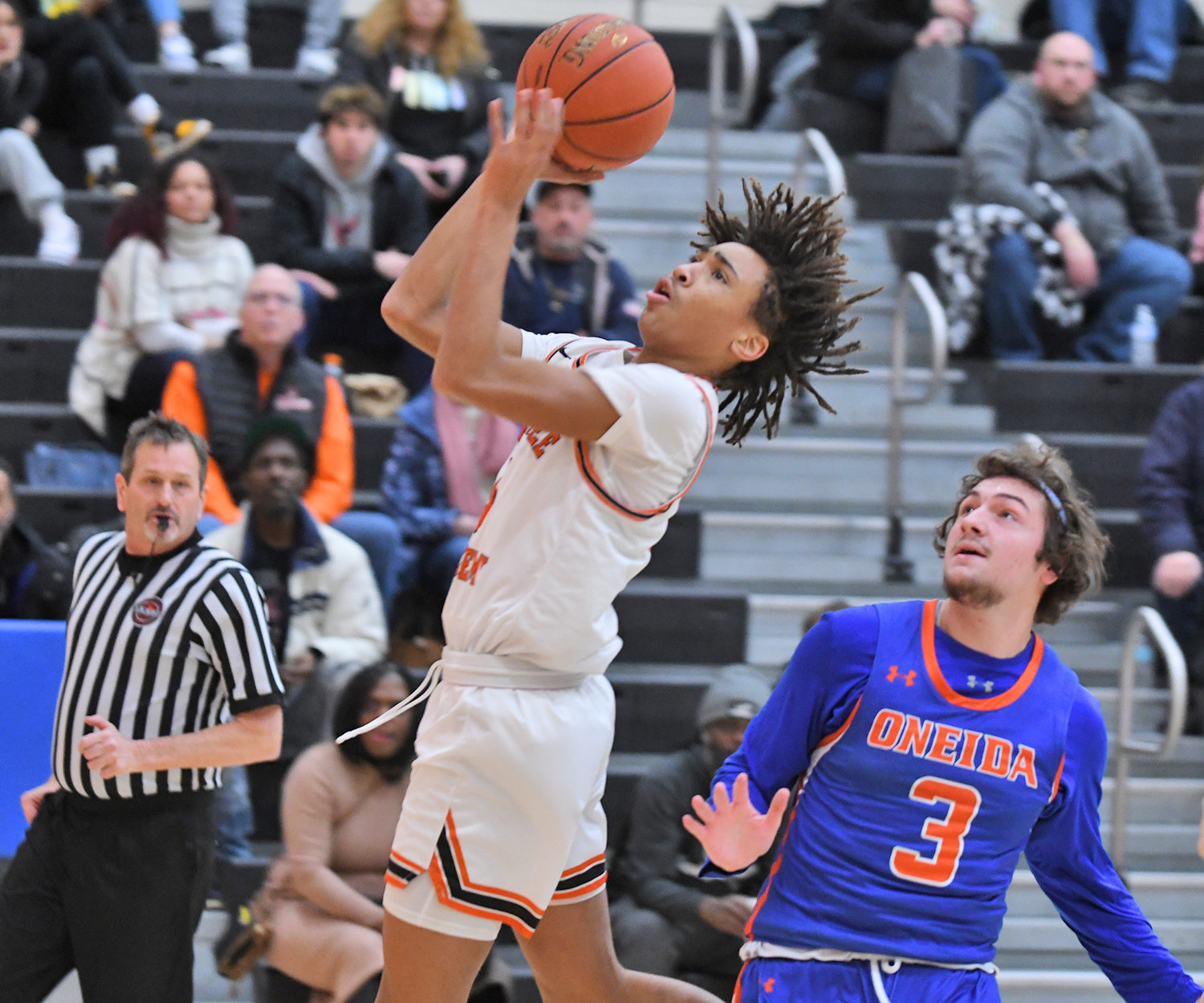 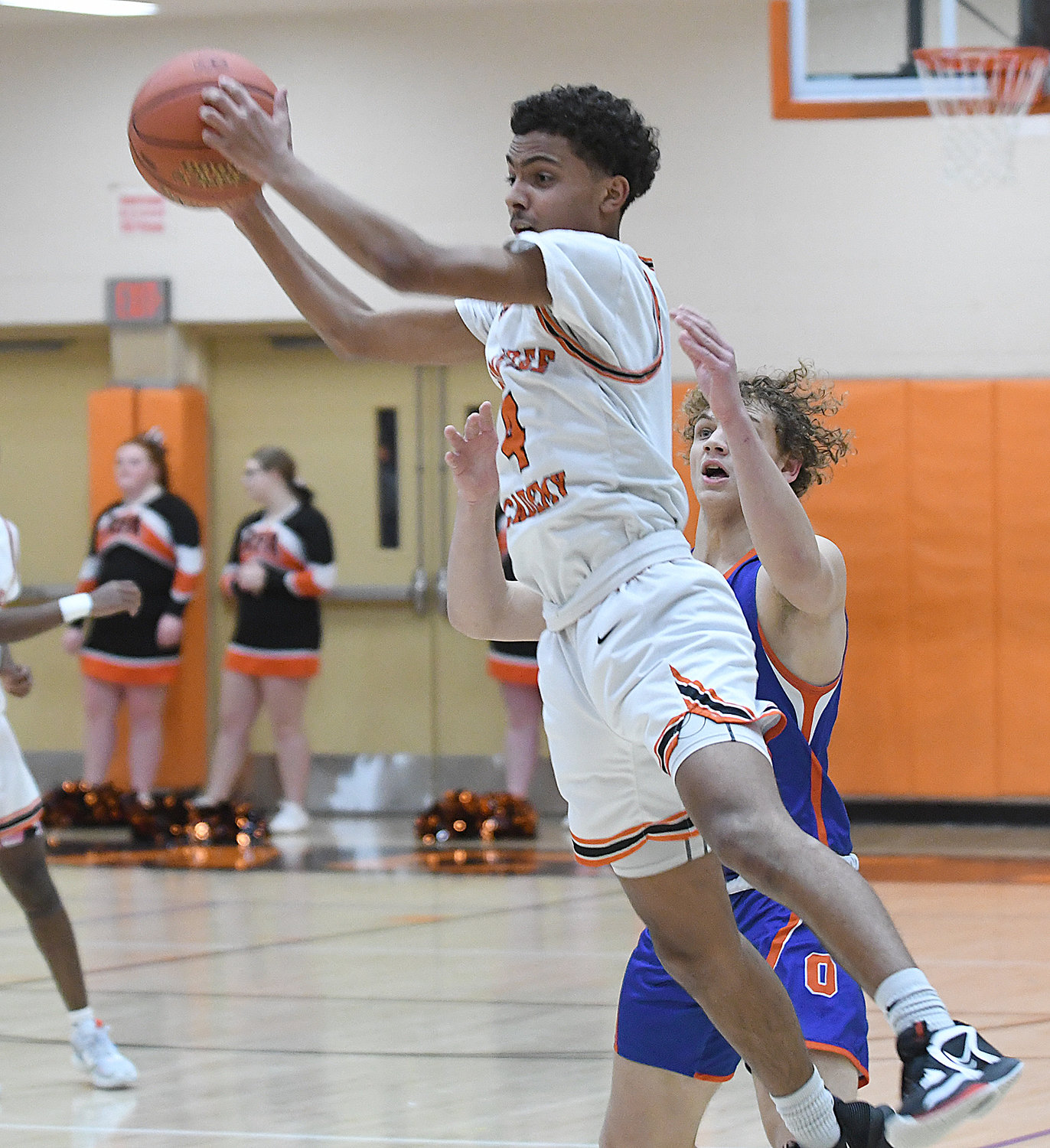 Rome Free Academy freshman guard Surafia Norries picks off a pass in front of Oneida’s Austin Degroat in the first half Friday night at RFA. Degroat led Oneida with 22 points but the Black Knights won 95-80.
(Sentinel photo by John Clifford) 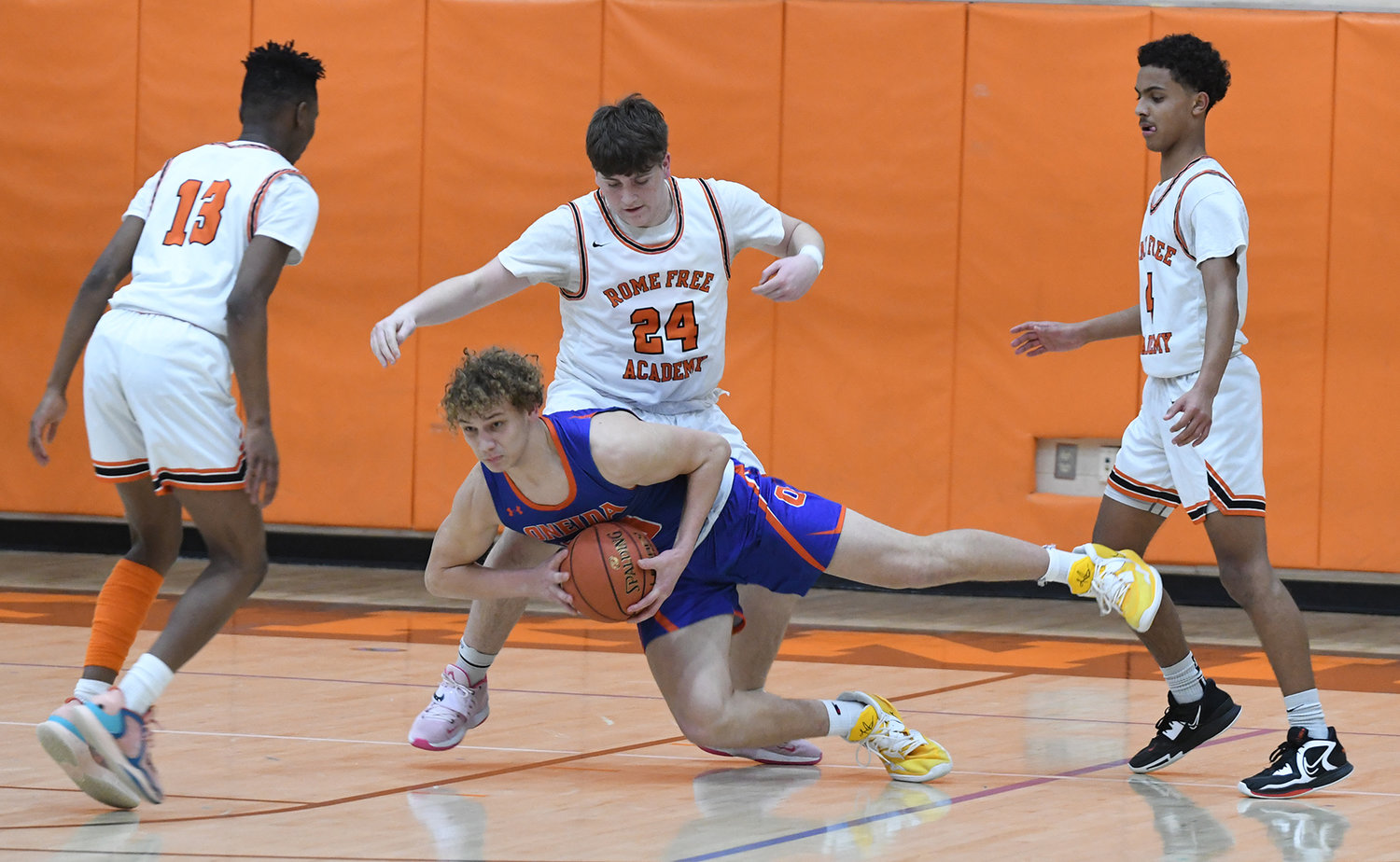 Deandre Neal scored 13 for RFA, Jack Lawless had 12 and Isaiah DeJean had 10.

Amya McLeod, second in scoring all-time for the Rome Free Academy girls basketball team, broke the 1,500-point barrier in the team’s 43-34 win at Oneida Friday in the TVL.

Oneida (5-5) hosts Fayetteville-Manlius in a non-league game at 6:30 p.m. Wednesday.

Sauquoit led 17-9 after a quarter but Adirondack battled back to lead 22-21 at the half.

Sauquoit’s Makayla Land had a double-double with 11 points and 11 rebounds and added seven assists. Alaina Weaver scored 16 to lead Sauquoit.

Adirondack (5-6) hosts Mount Markham at 7 tonight in the league.

Sauquoit (0-11) played at Clinton in the league Monday. Results were not available at press time.

The Oriskany girls basketball team ran out to a 13-5 first quarter lead and led 28-10 at the half at Stockbridge Valley in a 50-31 non-league win Saturday.

Alexis Kress had 16 points and 12 rebounds and Olivia Brand had 11 points and 13 boards in a 45-36 win by the Little Falls girls basketball team at home over Waterville Saturday in the Center State.

Waterville led 13-2 after a quarter but the Mounties responded by outscoring them by six in the second and 10 in the third to take the lead.

Little Falls (6-6) hosts Poland at 7 tonight in the league.

Waterville (4-6) is at Frankfort-Schuyler in the league at 7 tonight.

The Notre Dame girls basketball team lost 68-65 in overtime to Baldwinsville Saturday then lost 69-49 to Catholic Central at its own Juggler Classic tournament.

Against Baldwinsville, the Jugglers trailed 26-25 at the half. They took a five-point lead headed into the fourth quarter. Baldwinsville forced overtime, where the Bees outscored the hosts 10-7 to win.

Baldwinsville statistics were not submitted.

Against Catholic, the Jugglers fell behind 17-3 in the first quarter.

Statistics for Catholic were not submitted.

New Hartford takes over in second half

The New Hartford girls basketball team trailed by three at the half against visiting Holland Patent Friday but rallied to win 44-28 in the TVL.

The Spartans outscored the Golden Knights by nine in the third and 10 in the fourth.

HP (5-6) hosts Thomas R. Proctor High of Utica at 7 tonight in the league.

The Dolgeville girls basketball team won 61-42 over visiting Canajoharie in non-league play Saturday. Kerisa Van Olst scored 21 for the Blue Devils and teammate Payton Comstock had 15 points and 15 rebounds for a double-double.

Dolgeville led 8-4 after a quarter then opened up the offense to take a 28-14 halftime lead.

Statistics for Canajoharie were not submitted.