At the second-generation Cullen Pumpkin Farm in Richfield Springs, the Shypski brothers — John, Tom, and Richard — along with their families, friends, and neighbors, are keeping fall traditions alive. 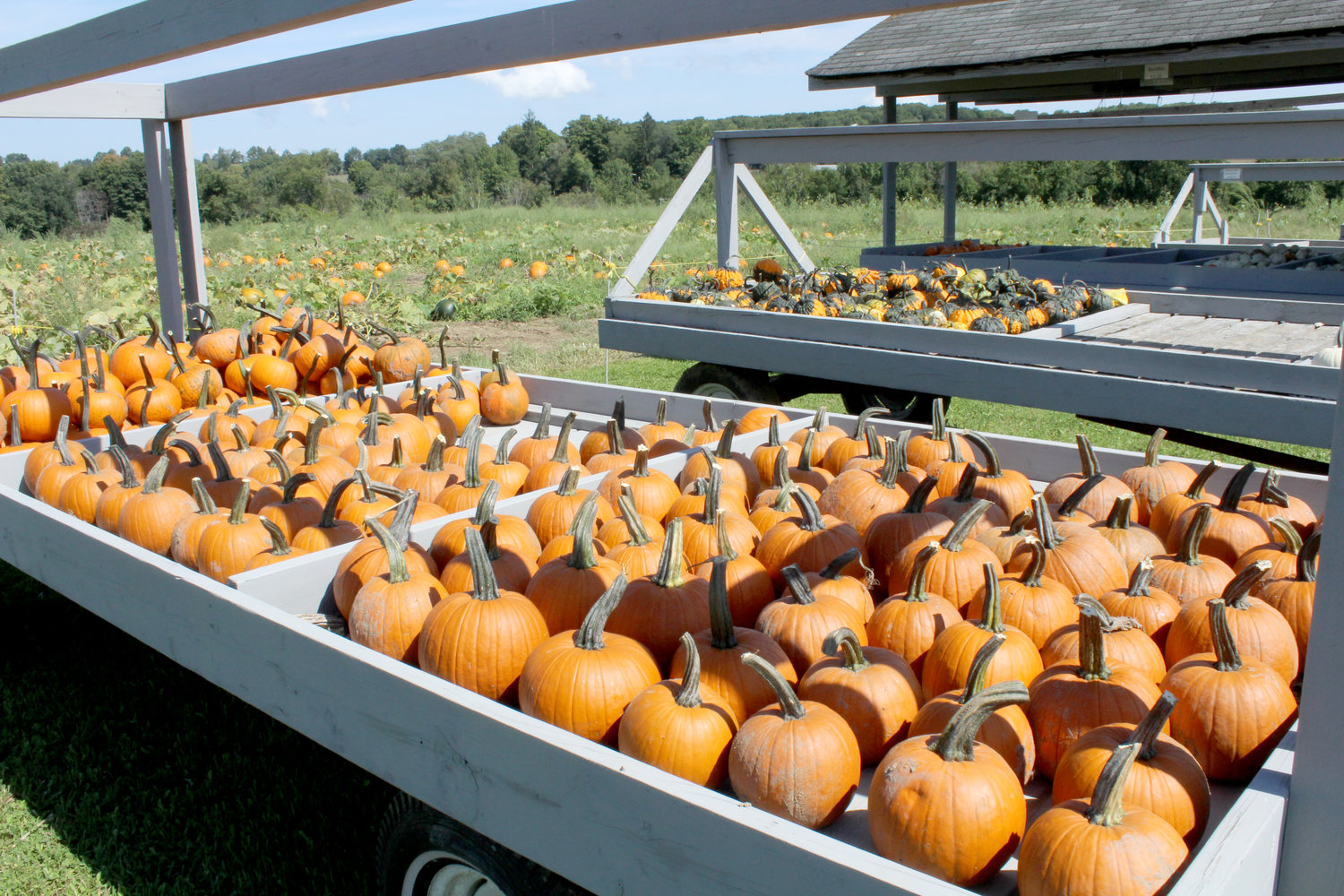 At the Cullen Pumpkin Farm, Richfield Springs, pumpkins and gourds are hand-planted and hand-harvested, ready for sale.
(Photo by Richard Barrett) 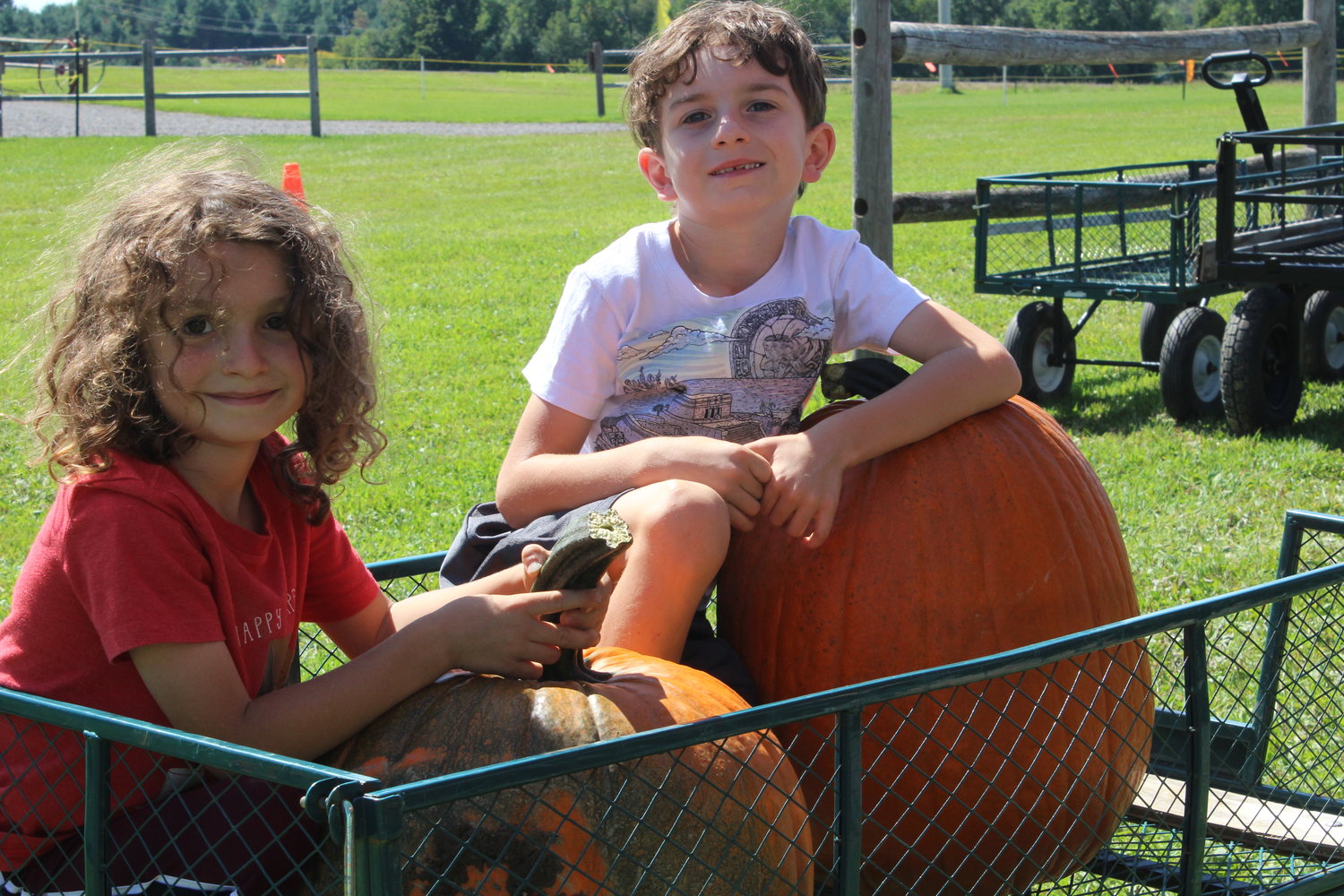 Lincoln, at left, and Emerson Price display the fruits of their labor from the u-pick pumpkin patch.
(Photo by Richard Barrett) 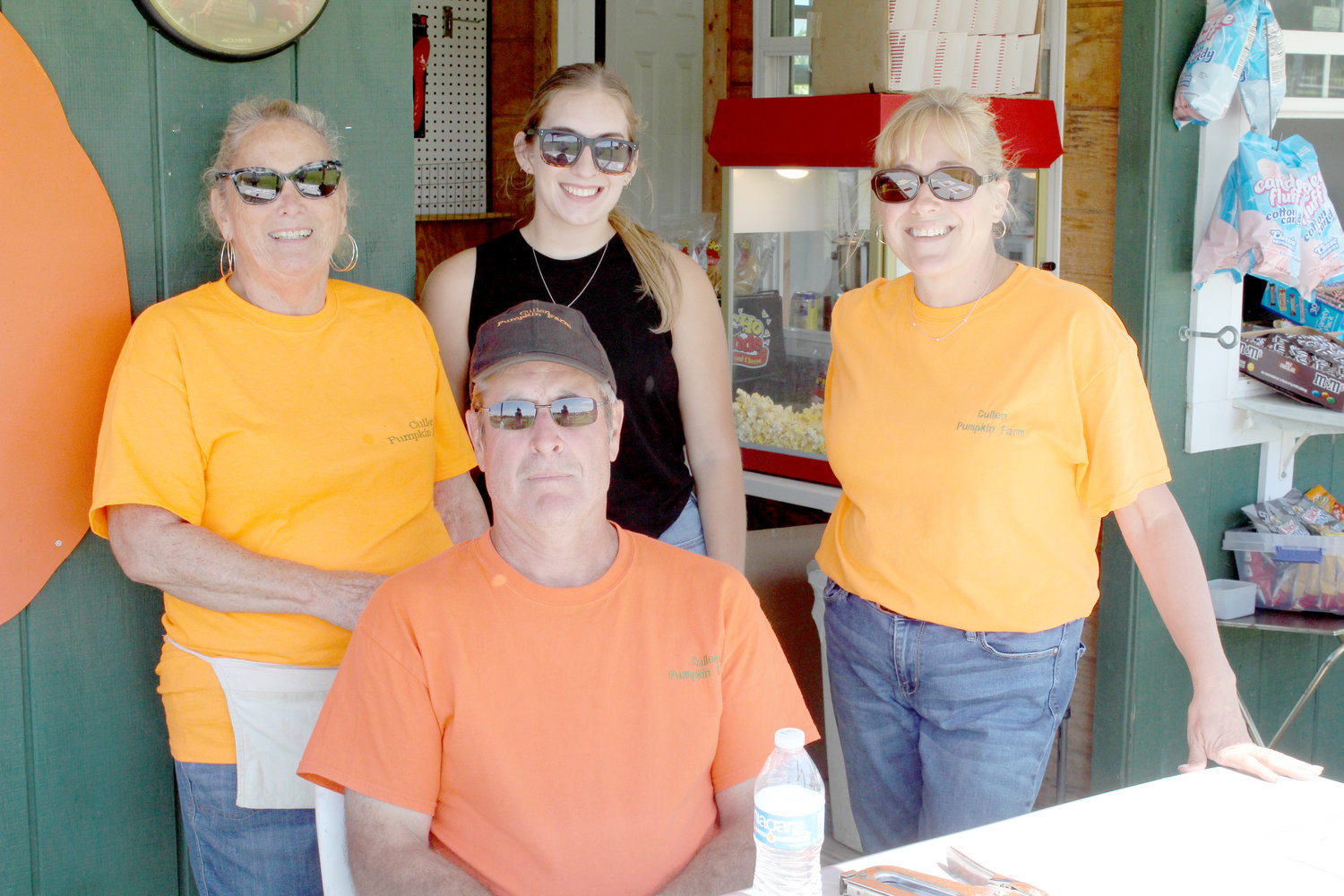 Pumpkins of all colors, shapes, and sizes are ripe for the picking.
(Photo by Richard Barrett) 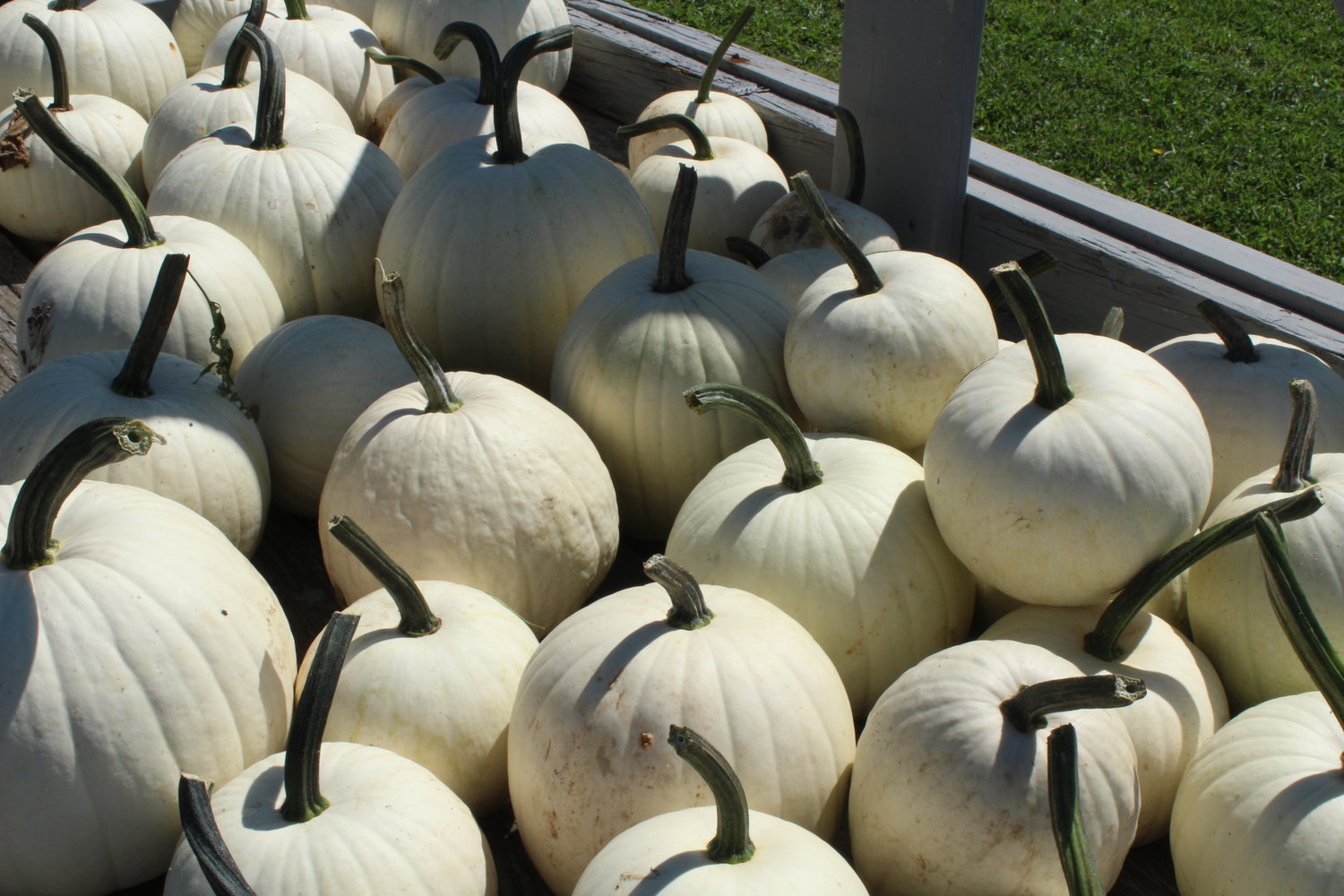 The white pumpkin is one of 20 varieties planted each year by the farm.
(Photo by Richard Barrett)
Previous Next
Posted Wednesday, September 21, 2022 7:00 pm
More information

For directions, hours of operation, and a calendar of events and activities, visit: cullenpumpkinfarm.com

I can smell autumn dancing in the breeze. The sweet chill of pumpkin, and crisp sunburnt leaves.

In virtually any fall harvest scene, the brightly-colored orange orb we know and love as the pumpkin is always on full display. Over the past century, it has achieved status as the iconic symbol of the autumnal season and is celebrated for its role in the tradition of carving and displaying jack-o-lanterns for Halloween.

A pumpkin is a fruit and belongs to the cucurbit family, which includes gourds and winter squash. Archaeologists first discovered traces of seeds in the Oaxacan Highlands of Mexico dating back 7,500 years. Those seeds eventually found their way to practically every country in the world. The only place where pumpkins aren’t grown is Antarctica.

The word pumpkin derives from the Greek “pepon,” meaning large melon. It was later Westernized by the British to “pumpion,” and then Americanized to the pronunciation we use today. Because of their durability and resiliency, pumpkins symbolize growth, prosperity, and abundance in many cultures worldwide.

History shows that Irish immigrants to America are responsible for introducing the custom of turning the pumpkin into a jack-o-lantern designed to ward off evil spirits and to commemorate the dead. Legend has it that a soul called Jack died and spent time tortured between Heaven and Hell. The devil showed pity by giving him a lantern to wander in the darkness for eternity. The Irish used hollowed-out turnips and placed a coal ember inside, thereby breathing life into the modern day Halloween creation called the jack-o-lantern.

At the second-generation Cullen Pumpkin Farm in Richfield Springs, the Shypski brothers — John, Tom, and Richard — along with their families, friends, and neighbors, are keeping venerable fall traditions like these not just alive, but thriving.

Once a 100-acre dairy and hay farm run by their Polish immigrant father, the family now plants about 25 acres with 20 varieties of pumpkins and sweet corn. In addition to selling wholesale to about 30 local businesses, they offer a u-pick pumpkin patch, hay rides, a corn maze, a Pumpkin Express barrel train, and weekend attractions that include a craft fair, a pumpkin chuckin catapult, and a local team of Clydesdales.

John Shypski explained that the brothers took over the farm from their dad, who used to sell pumpkins and corn roadside from a hay wagon while sitting in his car. “He did it for fun and so he could talk to people. It made him happy,” he recalls.

The entirely hands-on process begins every May 1 with the planting of 30–35,000 seeds, one-by-one, in greenhouses, and then transplanting the seedlings into the ground by hand on Memorial Day weekend. In late August and early September, a portion of the pumpkins and gourds are hand-harvested and ready for sale, and the remaining are left intact in the fields for visitors to pick their own.

For more than a decade, the Cullen Pumpkin Farm has attracted many thousands of visitors each year, with crowds only increasing, Shypski observes. It’s an encouraging trend, and he credits word of mouth and social media for gaining new generations of customers while retaining existing ones, like the Price family, who’ve been loyal visitors to the farm for the past six years.

“We want to make it a destination,” Shypski said. “We consider ourselves part of the farm-to-table movement, where people know where their produce comes from. It’s grown right here.”

Shypski says the pumpkin farm is expanding and evolving every year, adding more attractions, especially for youngsters. For him and everyone involved in creating this seasonal experience, it’s a ton of work, but also a labor of love.

“It allows the farm to stay in the family,” he says proudly. “We feel an obligation to keep it going.”