Assemblyman joins rally against changes in how restaurant servers paid 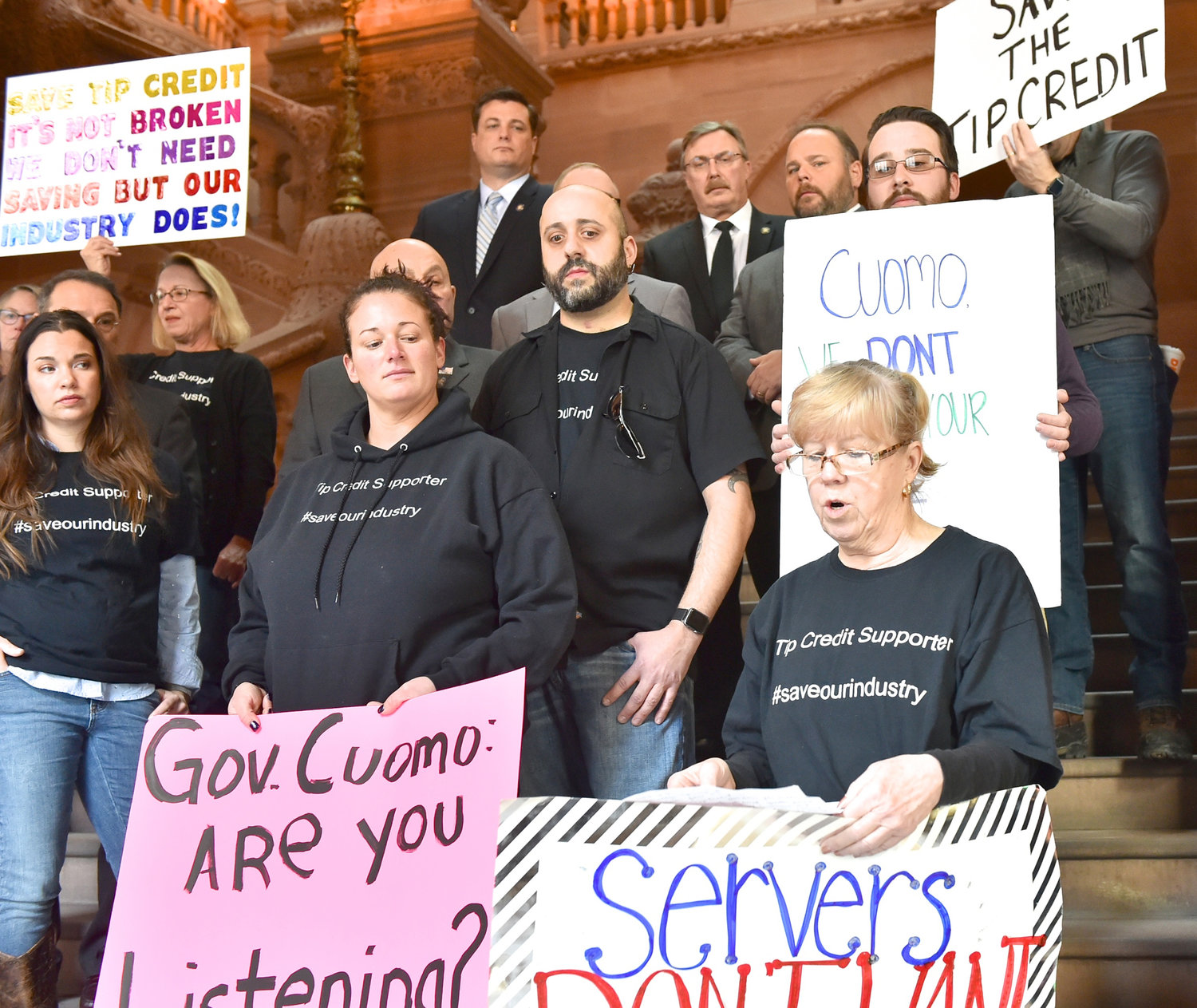 SERVERS RALLY — New Hartford Assemblyman Brian Miller, at center rear, looks on as members of the Restaurant Workers of America rally Tuesday at the state Capitol in Albany against changing laws regarding how tipped workers are paid in New York. The association says servers would likely earn less money if the tipped wage credit were eliminated and the minimum wage fully applied to all workers in tipped industries.
(Photo submitted)
Posted Wednesday, January 23, 2019 11:39 am

Assemblyman Brian Miller, R-101, New Hartford, joined a rally at the state Capitol Tuesday against eliminating the credit for tips for tipped workers in favor of extending the minimum wage to all workers.

Gov. Andrew Cuomo raised the issue in January 2018 and the state Labor Department held hearings last summer on whether to eliminate the credit for tipped workers in the state’s minimum wage law.

The maximum credit for tips received for food service workers went to $3.60 Dec. 31. Coupled with the minimum wage for tipped food service workers, now $7.50 an hour, that is supposed to equal the state minimum wage, which went to $11.10 an hour Dec. 31 outside New York city and the metro area. The minimum and the credit are set to increase the next two years then be reviewed and adjusted annually according to the Consumer Price Index and other economic indices.

Miller joined a rally sponsored by Restaurant Workers of America and said restaurant servers have told him they favor keeping the tip credit because they would make less money.

“There is no question that working in a restaurant is a hard job, but it is a job that many of my constituents love and do not want to see changed,” Miller said in a statement. “I have heard from many people who work as servers and they don’t support the governor’s plan because they stand to lose money. I stand behind these workers and what they believe is best for them and their families.”

That view is also favored by the Business Council of New York State, the state Hospitality and Tourism Alliance, the Empire State Restaurant and Tavern Association and Unshackle Upstate and multiple chambers of commerce, according to Miller.

Miller cited a survey by the New York City Hospitality Alliance of 486 restaurants employing nearly 14,000 tipped workers that found that servers earn median of $25 an hour under the current system. The alliance also said three-quarters of restaurants, both full- and limited-service, have or plan to reduce employee hours because of the mandated increases.

Miller’s district extends from New Hartford and Paris in southern Oneida County through a narrow swath of the state to the Poughkeepsie area.