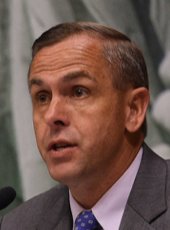 GLOVERSVILLE — Assemblyman Robert Smullen, R-118, Gloversville, is calling for large-scale changes to the state’s property and income taxes as well as government spending, following the passage of the state’s $220 billion budget.

Smullen’s comments also follow New York’s economic outlook being dubbed “the worst in the nation” as part of a report by the American Legislative Exchange Council, an organization of conservative state lawmakers who draft and share proposed legislation.

“The numbers speak for themselves,” said Smullen. “Despite the rhetoric from the governor’s office and Democrats in charge of our state, we are lightyears away from a tax-friendly state. Look no further than the mass exodus from our state in recent years to exemplify the strain high property and income taxes place on our families, businesses and seniors.”

“Our recently-passed state budget was almost as much as that of Florida and Texas combined, despite both states having higher populations,” Smullen said. “ALEC’s numbers are deeply troubling and paint a frightening picture for the next generation of New Yorkers.”

Each state, the report says, is also ranked based on its economic performance, which, the group says, is a backward-looking measure based on a state’s performance on three variables: State gross domestic product, absolute domestic migration and non-farm payroll employment.

“I’ve long said that New York doesn’t having a revenue problem, it has a spending problem, and we continue to see our taxes fund reckless spending and lavish giveaways that have put us in this position,” said Smullen.

“This year’s budget was no exception. Instead of using our large infusion of federal aid for more tax relief to the struggling middle-class, backroom politicians spent it on free college for prison convicts and a new sports stadium,” the assemblyman added.

“We need to drastically cut our income and property taxes, eliminate New York’s deficit spending paradigm, encourage small business growth, support our family farms and address record inflation head on. Only then will we see population rebound and the regrettable loss of congressional representation in Washington restored.”

The 118th Assembly District includes parts of Herkimer, Oneida and St. Lawrence counties as well as all of Hamilton and Fulton counties.