John Zielinski, Republican challenger in the race for the 119th State Assembly district, visited Owl Wire and Cable, Inc. on his campaign trail. 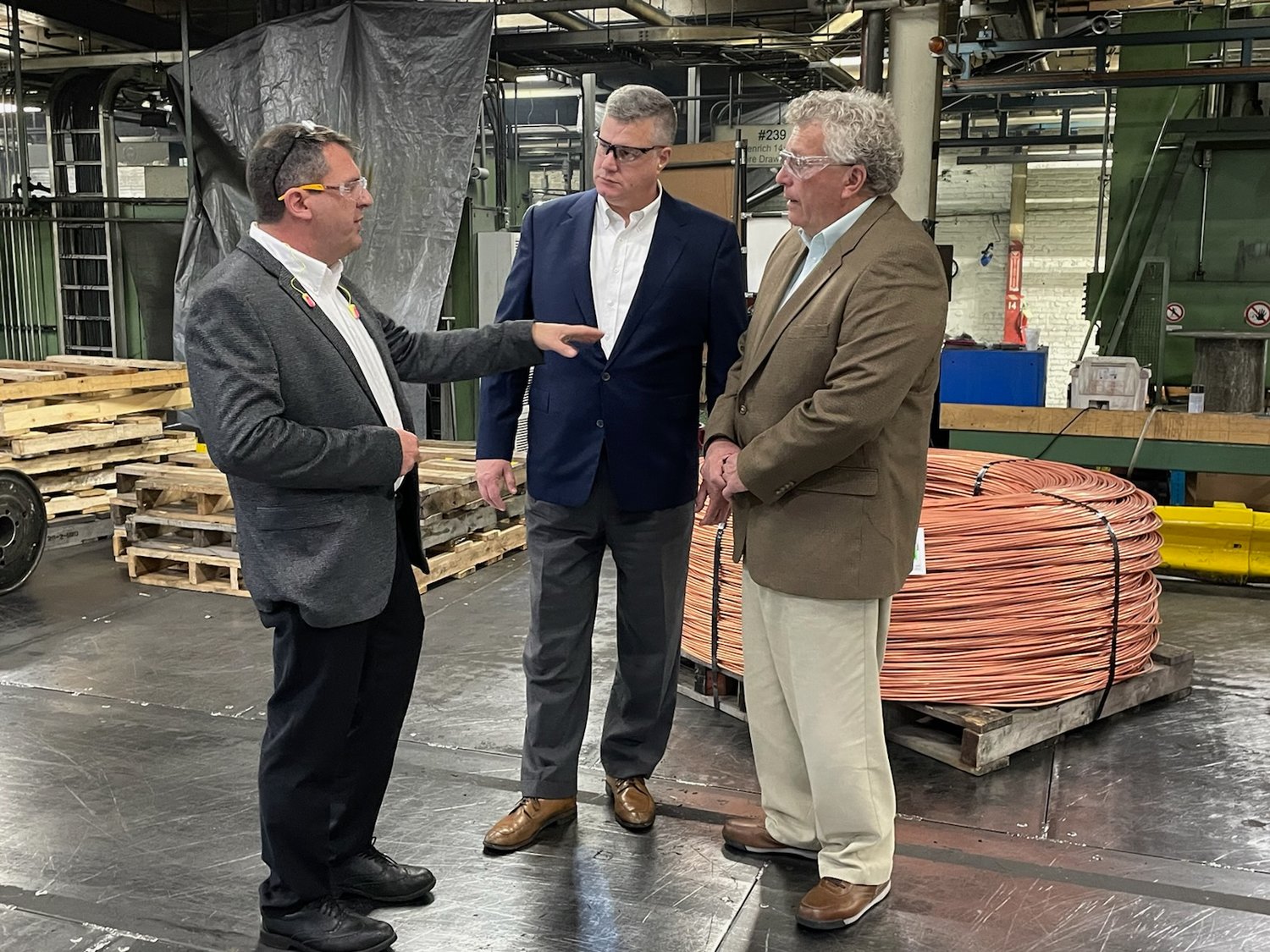 Assembly candidate John Zielinski, right, receives a tour of the Owl Wire and Cable plant on South Madison Street in Rome. The Assembly candidate was greeted by Gregory J. Smith, CEO and president of International Wire, parent company of Owl, and David Bass, vice-president of Operations and Continuous Improvements, among other longtime company officers and employees.
(Sentinel photo by Nicole A. Hawley)
Posted Saturday, October 29, 2022 9:20 am
Nicole A. Hawley
Staff writer
email / twitter

Zielinski, of Marcy, faces off against incumbent Democrat Marianne Buttenschon, also of Marcy, in the Tuesday, Nov. 8 election.

The 119th District covers the cities of Utica and Rome, and the Towns of Floyd, Marcy and Whitestown in Oneida County, as well as the Town of Frankfort in Herkimer County.

Zielinski was greeted by Gregory J. Smith, CEO and president of International Wire, parent company of Owl, and David Bass, vice-president of Operations and Continuous Improvements, among other long-time company officers and employees.

Smith started his talk with some history on the company. Headquartered in Camden, International Wire is the largest non-vertically integrated copper and copper-alloy wire products manufacturer in the U.S., with expanded operations in Europe.

Smith said several employees have fathers and even grandfathers who worked for the business, “so the industry has much history here for sure.”

International Wire provides copper wire to manufacturers of security alarms, small appliances and electronics, as well as to nuclear power plants and transit.

Smith discussed the challenge of finding skilled laborers to operate the company’s plants.

“About 50% of our employees have less than three years experience,” he noted.

International Wire also continues to navigate through the challenges brought on by the COVID-19 pandemic, the CEO said. Despite the challenges however, Smith said the company has increased its labor rate by 25% over the last 18 months, keeping International Wire “on top” for wages and benefits offered to employees, including health care and a competitive 401K.

During the pandemic, the CEO said International Wire was able to keep work disruption at a minimum while also protecting employees, keeping everyone safe. Over the last 12 months, “there’s been a record back log due to the level of demand, which is certainly strong,” Smith explained, adding that the company has continued to look at the recession and how to deal with it as a business. “But we’ve remained healthy.”

So far International Wire is on the mark to produce 400 million pounds of copper wire this year, “if we have the people,” said Smith.

The president and CEO said International Wire hopes to continue efforts to reach out to local high schools and community colleges to promote jobs with their company, and in manufacturing in general. “Unfortunately, young people don’t necessarily think of manufacturing as a career, and we’re trying to change that,” Smith said.

Born in Rome, Zielinski was raised in Westmoreland and was a graduate of Westmoreland High School before attending Syracuse University. He and wife Kate have four children, two who serve as officers in the military.