About 30 Mohawk residential school survivors and their families marched across the Cornwall bridge to Canada last Saturday. 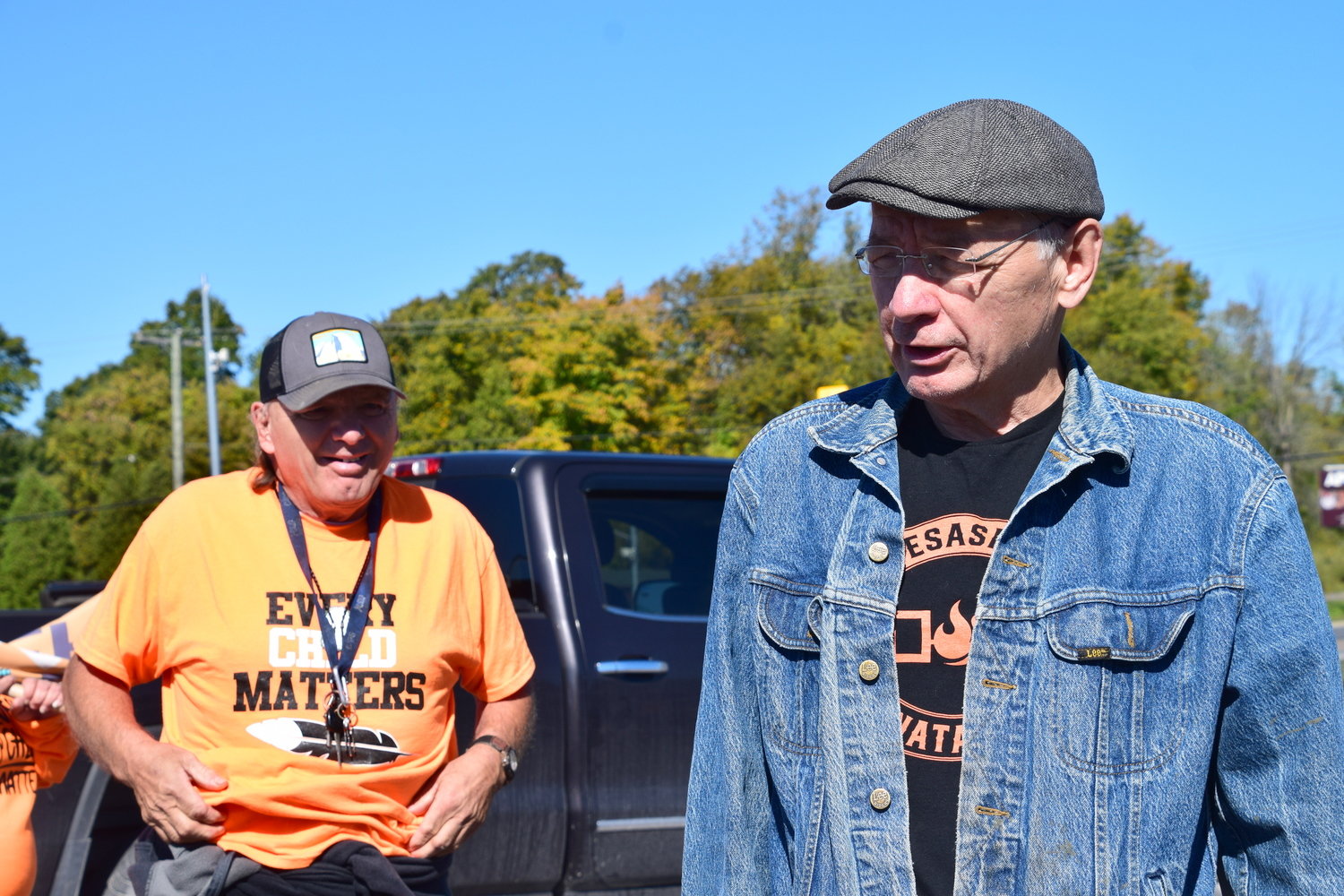 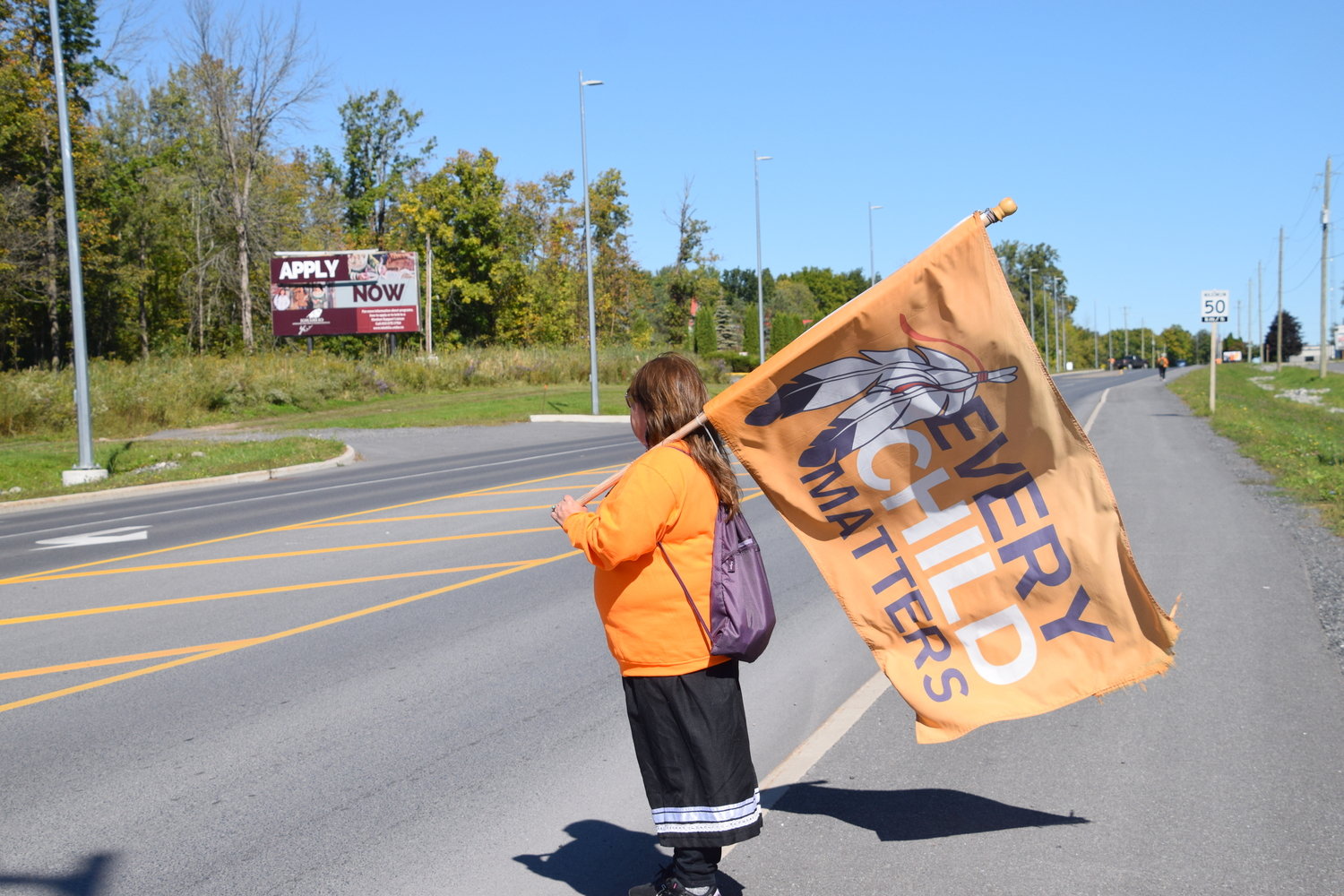 A protester carries a flag that reads, “Every Child Matters,” while marching from Akwesasne to Trinity Anglican Church in Ontario to call for the release of all records related to the Mohawk Institute residential school.
(AP Photo/Celia Clarke/NCPR) 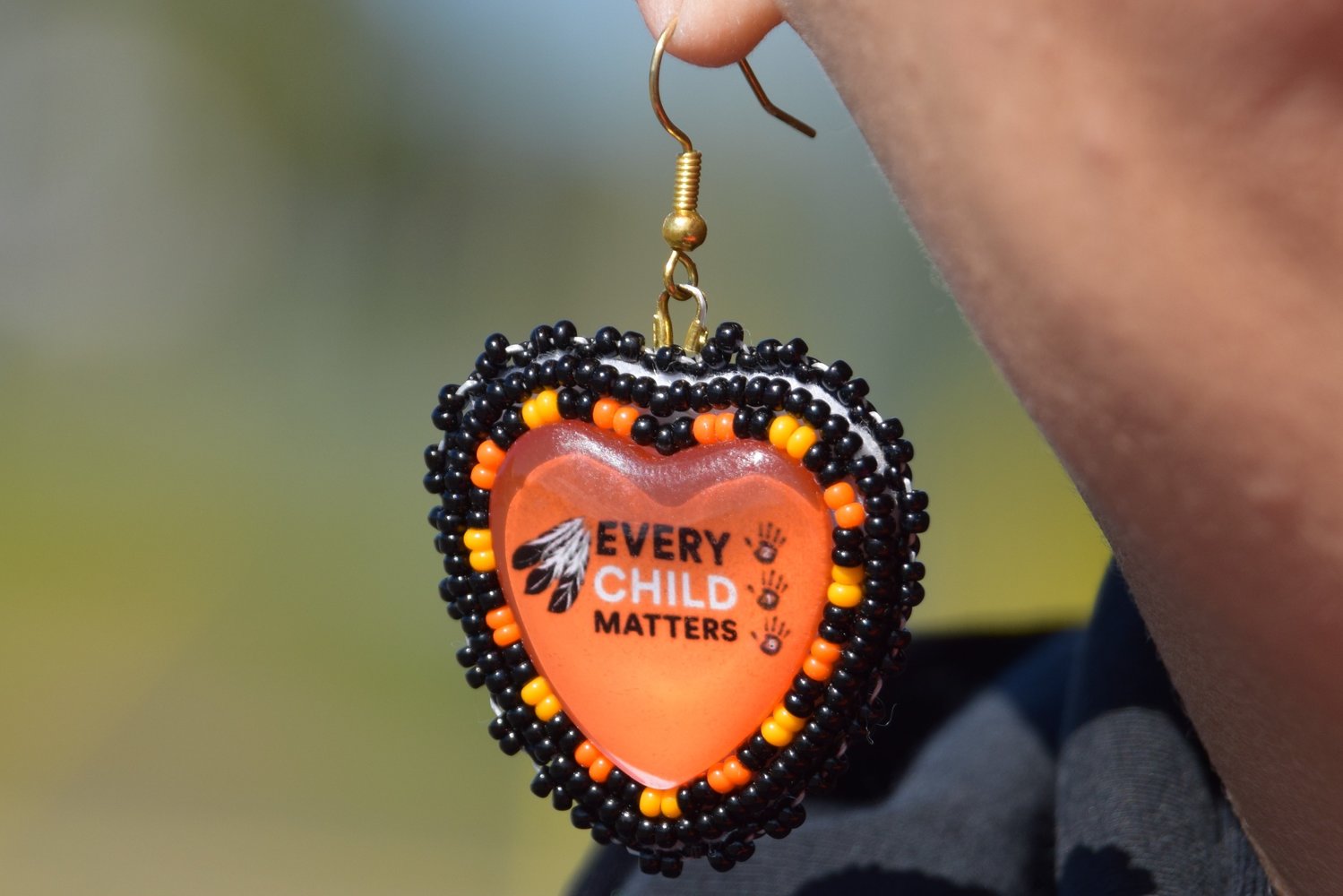 Heather George wears a pair of earrings with the slogan “Every Child Matters” while marching with Mohawk Institute survivors and their families for access to Anglican Church records.
(AP Photo/Celia Clarke/NCPR) 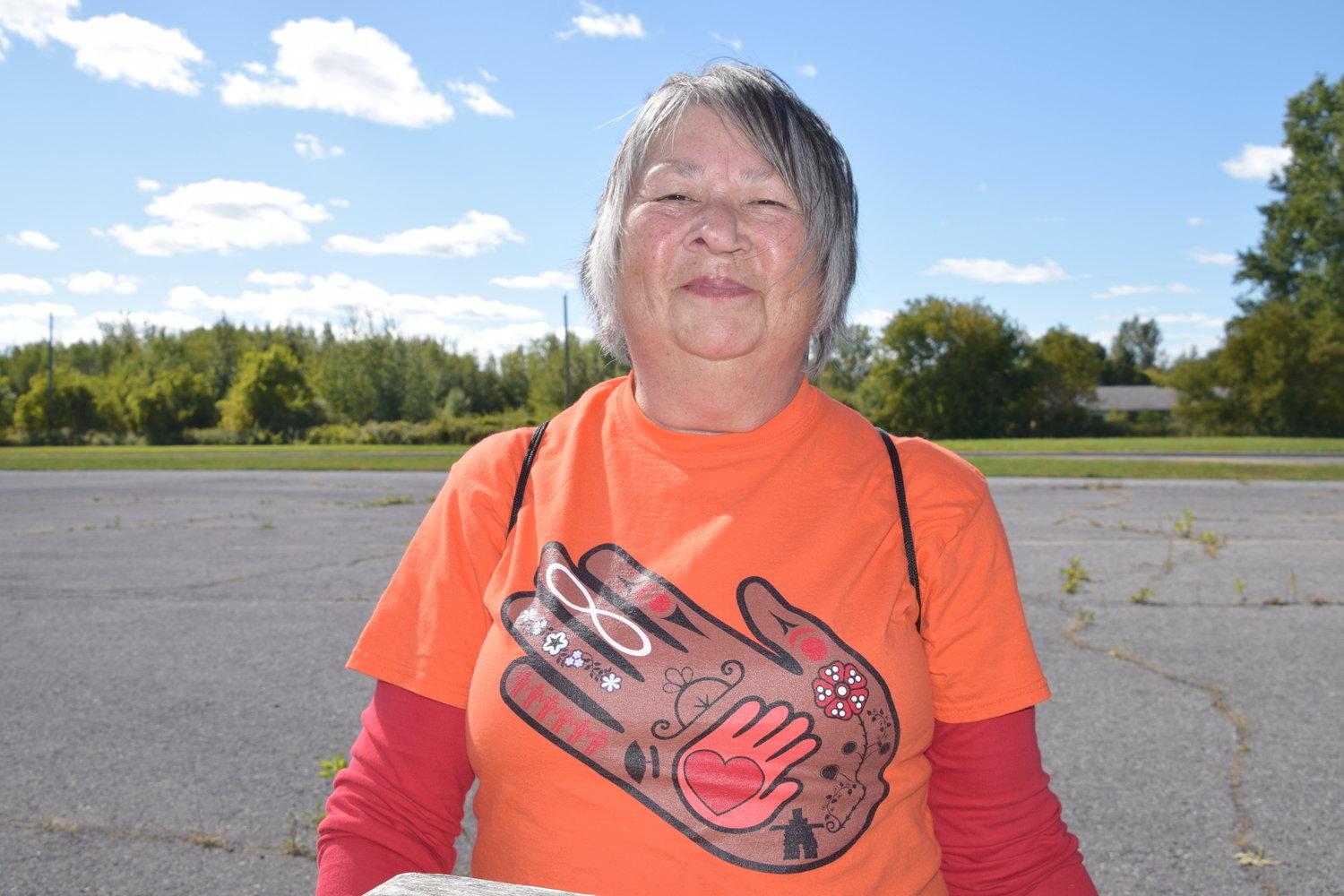 Emily Tarbell says she never went to a residential school, but her older siblings did and she sees how what they went through now affects their children.
(AP Photo/Celia Clarke/NCPR)
Previous Next
Posted Saturday, October 1, 2022 12:00 pm
Celia Clarke, North Country Public Radio

About 30 Mohawk residential school survivors and their families marched across the Cornwall bridge to Canada last Saturday. They were calling for the Anglican Church in Canada to open access to all documents related to the Mohawk Institute.

The Mohawk Institute was a residential school where indigenous children were forcibly taken from 1830 to 1970. At least 97 Mohawk children died there, according to newly released records. It’s still unknown where the children were buried.

Many of the marchers on Saturday were wearing orange T-shirts that said “Every Child Matters” in English and Mohawk.

“We cannot heal unless we account for every single child that was taken from us,” said Doug Kanentiio George, one of the march’s organizers.

George was at the Mohawk Institute for 18 months in the late 60s. He said getting access to records the Anglican Church still has, not just finding unmarked graves, is crucial to piecing together what happened to Mohawk children.

“Then we have to begin the very difficult, highly emotional part, which is once we locate them, and we bring them back to the surface, we have to find out where they came from, in which families they came from,” he said.

As they walked, marchers talked and shared their families’ experiences with each other.

Emily Tarbell never went to a residential school, but some of her older siblings did. She said she sees the harm the schools have done. “I see it like with their children like there’s no emotional or physical closeness with (them)... Like you don’t, they don’t trust you maybe, you know, very shut off from their emotions, I think,” she said.

Heather George is in her 30s. She attended the march with her young daughter, whose father suffered from his own family’s experience. “Because he was raised by people directly who were in residential school, I really saw the effects of that in our relationship,” she said. “And that made me really angry and sad a lot. Because, you know, I was seeing how that was impacting our family. And so sometimes I would be sad and angry at what was going on in our family. But then sometimes I would be sad and angry about these like, bigger things like that people didn’t know this history, or that people didn’t understand why we carried this trauma.”

Heather George is a historian and curator of indigenous histories at the Canadian Museum of History. She’s currently a guest curator at the Woodlawn Cultural Centre. The Centre is in the former Mohawk Institute building in Brantford, Ontario.

In addition to full access to all records about the Mohawk Institute, this group wants something more. They went to Cornwall to begin a peaceful collaboration between Mohawk people from Akwesasne and the Anglican Church.

When they arrived at Trinity Anglican Church in Cornwall, parish priest Peter Crosby greeted them on the front lawn.

The national leadership of Canada’s Anglican church has publicly apologized for its role in residential schools. The diocese with control over Mohawk Institute records also gave its full support to a search of the grounds for unmarked graves. They’ve covered about 2% of the school’s 600 acres so far.

Before heading back across the bridge, two Mohawk singers offered a song of friendship. A song for the missing dead of the Mohawk Institute.