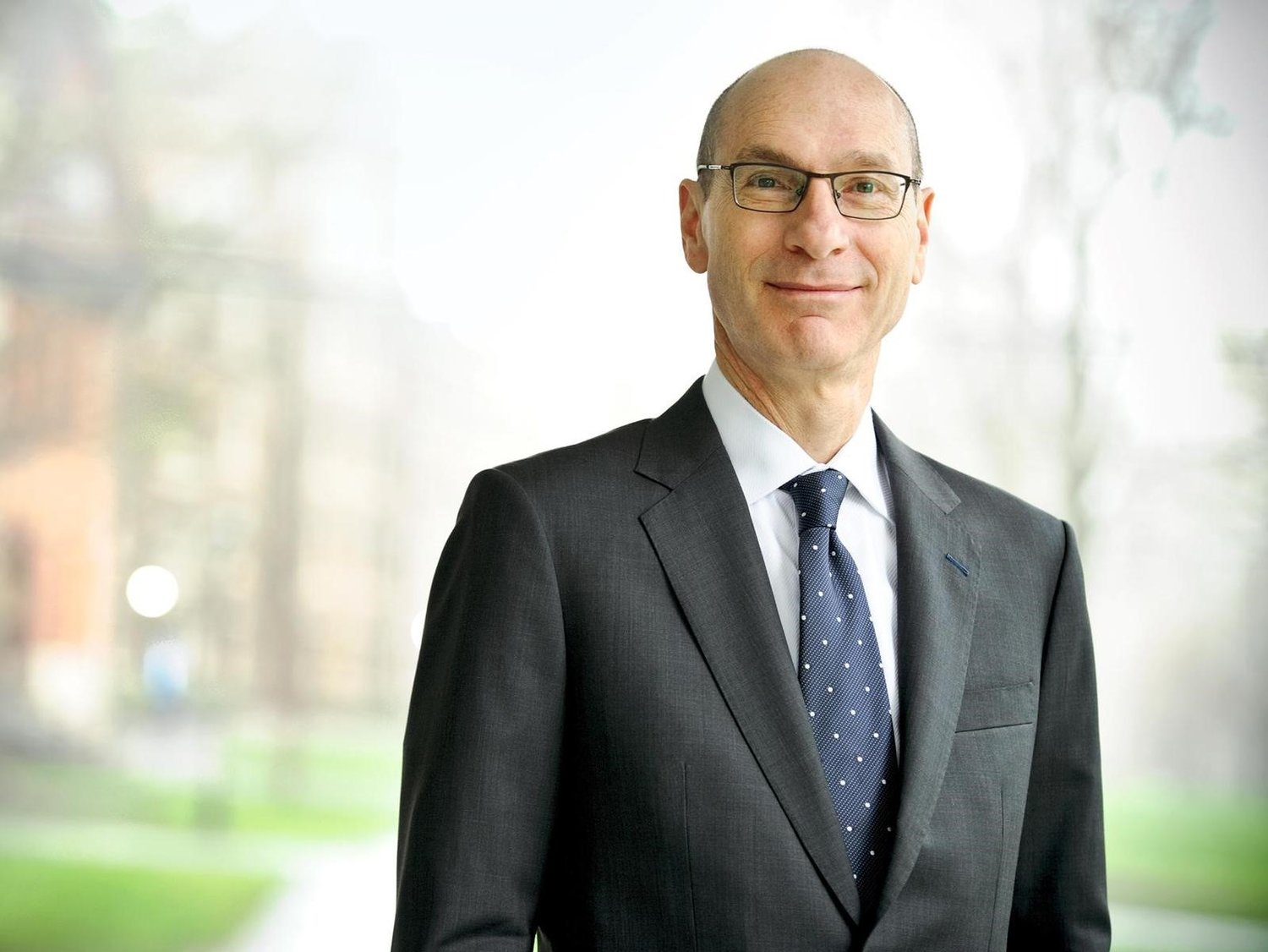 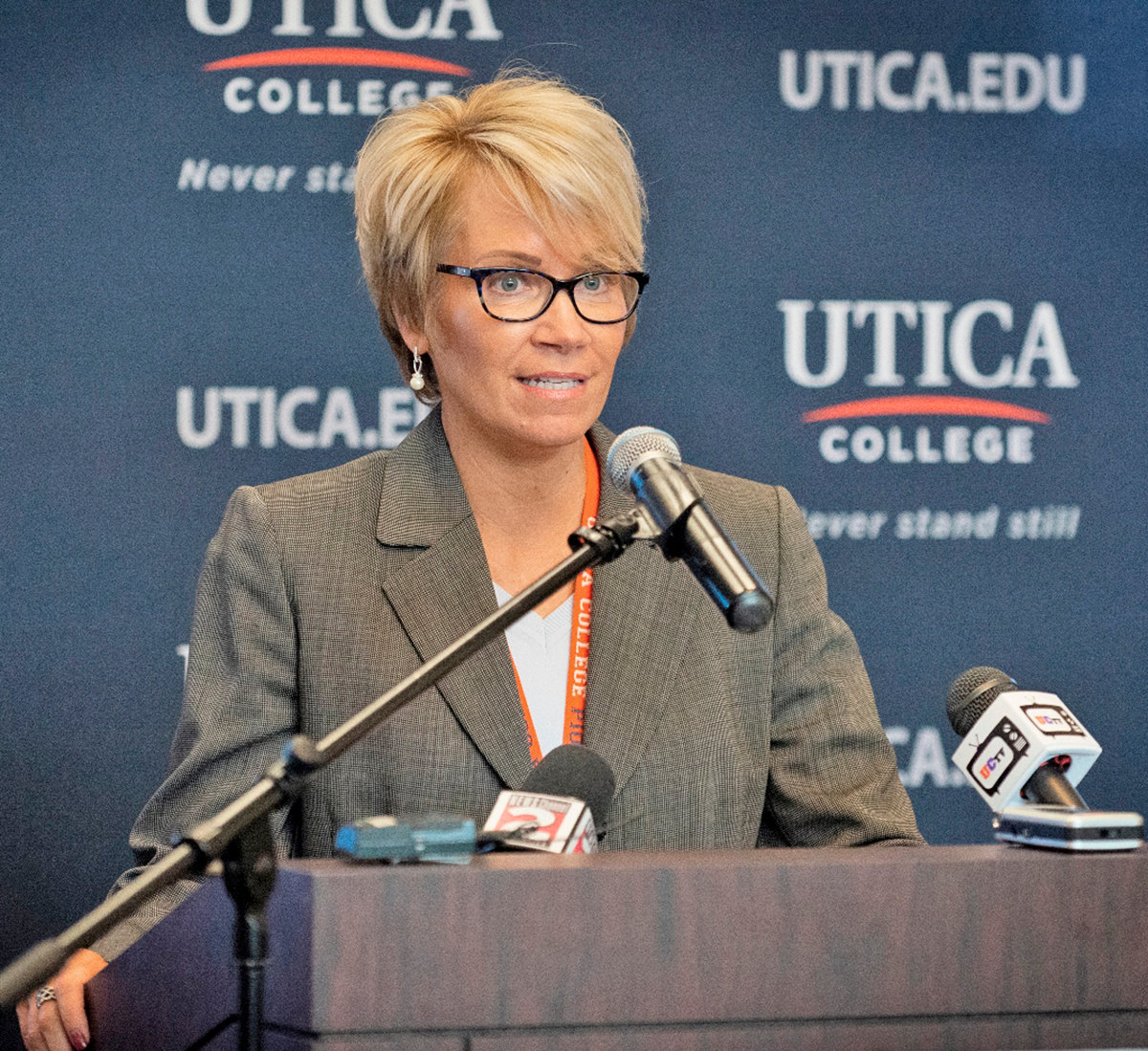 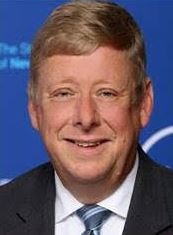 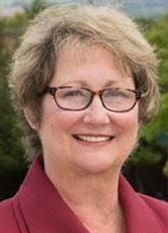 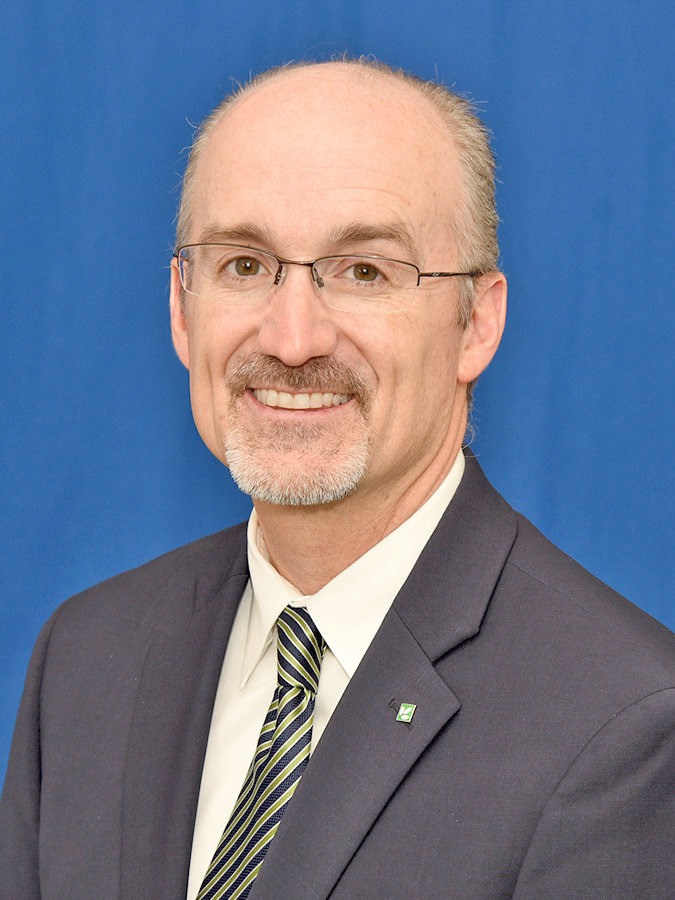 “I am thrilled to say that when I sit at my desk or open the door to the hallway, I actually see and hear students … it’s music to my ears,” said Herkimer College President, Cathleen McColgin in remarks made during a virtual roundtable of peer leaders of Mohawk Valley higher education institutions, “It was SO quiet for SO long, so to be able to hear students laughing and talking in the hallways? It’s just great to be back!”

McColgin was one of four Mohawk Valley area college presidents to share reflections of the 18 months during which the Covid-19 pandemic forced them to dramatically change their approach to higher education and the lessons learned as they emerge and focus forward during a virtual roundtable event hosted by The Genesis Group and the Mohawk Valley Alliance of Chambers of Commerce and Affiliate Partners – and moderated by Ray Durso, Jr., Chair of both organizations – on Oct. 6.

The roundtable was one of lunchtime series being presented by The Genesis Group and Mohawk Valley Alliance, all MC’d ably by Durso, where key influencers who share common ground are gathered to share insights that impact the greater Mohawk Valley community and economy. A consistent and effective format of allowing each speaker to make uninterrupted remarks on the theme and topic of the event, followed by a question and answer period, informs a perspective-rich presentation that celebrates collaboration among peer leaders across industries – including area school district superintendents, these area college presidents and Mohawk Valley business leaders - to promote best practices and best outcomes for the Mohawk Valley Region.

Durso opened by reminding listeners of the significance of higher education to the Mohawk Valley.

“Higher education is a billion-dollar industry in our region,” said Durso, pointing that more than 20,000 college students, not only from New York State and the Mohawk Valley Region, but from all over the country and the world come to live during the academic year at one of the many area colleges and universities. “It is an economic engine in our community.”

The college presidents were asked to spend 15 to 20 minutes discussing how the pandemic has impacted their institution, how they have and are managing that impact, and their path forward. The presidents were united in reports of extremely high vaccination rates and extremely low infection rates, while all four campuses maintain cautions such as indoor mask mandates. They expressed collective thanks for the consistent and responsive support of the Oneida County Health Department in supporting them in their efforts to keep their campus communities, as well as their common Mohawk Valley community, safe and unanimously expressed how, “like nothing they’ve ever seen,” they connected with and supported each other in their mutual role to lead their campuses through the challenges of the pandemic.

“A shout out to my colleagues on this call, it’s been wonderful to be able to say that we’re all in this together, we have been in this together, and I think what we’ve been able to do collectively is pretty remarkable,” said Casamento. “I really appreciate being able to pick up the phone or send a text and say, hey, I’m experiencing something. Is this happening for you? How can we help? We’ve all helped each other.”

The presidents also effused sincerely about their pride and joy in seeing students engaging on campus, manifest nowhere more visibly and viscerally that fall sports seasons in full swing with student-athletes competing on behalf of the respective colleges and the campus community coming out to cheer them on. Student-athletes vaccination rates, as well as testing frequencies, trended higher than the student population as a whole, which – itself – is significantly higher than the community at large.

Utica College’s Casamento shared its focus on facilities and curriculum expansion, as well as being tuned in to the needs of the greater Utica community and preparing students to uniquely meet them. Herkimer College’s McColgin shared challenges specific to a population comprised of primarily commuter students, the unique challenges Covid-19 presented to those students and their families, and how she sees this as a factor in a drop in enrollment, on which the community colleges rely heavily for revenue and resources. She highlighted new programs that served a call shared with Utica college to prepare students moving forward to meet the new and changing economic needs of the region upon graduation. Hamilton College’s Wippman focused on the impact, ongoing, of the anxieties and impact of the social isolation experienced by students over the past 18 months and echoed McColgin’s sentiment that in-person, on-campus engagement was essential. SUNY Poly’s Laursen expressed gratitude for how much he learned from the students themselves about what they needed to successfully navigate and emerge from the Covid-19 crisis.

Questions posed by those attending the virtual roundtable included Laursen being applauded as a welcome addition to SUNY Poly’s leadership, so when would they finally take the word “Acting” off of his title and confirm him as the institution’s president proper.

“That decision is above my pay grade,” joked Laursen somewhat, “it is not a secret among the Poly community that I would very much like to remove that modifier and I’m hoping … very soon.”

Casamento was asked when Utica College men’s and women’s hockey would return to “The Aud” and would there be restrictions placed on spectators?

She assured that she and leaders at UC were currently working closely with the Adirondack Bank Center on bringing college hockey back to Aud ice and that a puck drop should take place very soon, as the first UC hockey game is scheduled in just a couple of weeks.

As for spectator restrictions, Casamento clarified they those would not be Utica College policy, but guidelines put in place by the facility, with input from the college and state and county public health guidance.

“I’m sure there will be some restrictions,” said Casamento, “whether there will be mask or vaccine mandates, I don’t have the answer to that yet?”

Wippman was asked whether the Hamilton College Speaker Series would return in the near future.

He acknowledged that the college hosted a couple of speaker series. He believe the query referred to the “Great Names Speaker Series,” where students and residents from the greater community are invited to attend. The events held in the Hamilton College field house can attract up to 5000 people. So, with the pandemic still ongoing, Wippman regretted that the decision had been made not to host a “Great Names” event.

“We don’t think these are the kind of events you want to do remotely,” said Wippman.

He did encourage attendants to look forward to another speaker series hosted by the college, called “Common Ground.”

“We do anticipate two former chairs of the Council of Economic Advisors will be here in November to talk about income equality consequences and policy implications,” said Wippman. “That should be a quite interesting event and I think members of the community will be able to attend.”

He reminded that Hamilton college does have a vaccination as well as a mask requirement to go indoors on campus.

Finally, Martha Group, Superintendent of the Vernon Verona Sherrill Central School District in the Mohawk Valley Region posed a poignant question to any of the presidents who felt they could offer guidance – how do local districts such as hers, who send students on to all of your colleges and universities, help their high school juniors and seniors who have learned in a compromised environment during the past 18 months both academically and emotionally, to prepare to transition to college or work in the just the one to two years they have left with them?

Wippman called it a great question but not an easy one. He offered the context of Hamilton College students who had been impacted by Covid factors, and particularly this year’s freshman class.

“They are well prepared academically,” said Wippman, despite losing in-person class time and other opportunities they normally would have had, “but they lost some social opportunities that I think affected them even more than any loss of academic preparation.”

Wippman reported that Hamilton College is finding that the freshman class may not be quite as far along as preceding classes in terms of things like conflict resolution, emotional regulation and just how to get along with each other and live together in the community.

“Any progress you could make on rebuilding those types of opportunities would be helpful,” said Wippman.

“One of the things that has come out of this – and I have to talk to myself about it as a leader – is just … resiliency,” said Casamento.

Casamento pointed out that students are going to have a lot of things thrown at them through their lives and it won’t always be easy. Covid and lockdowns and being in the “Hollywood Squares” 24/7 has created a lot of angst and mental fatigue among high school students facing the advent of college or work.

“The transition to college isn’t easy under any circumstances,” said Casamento, “so, whatever we can do to bolster mental health and resiliency for students is important. It is such a big issue we are seeing on our campus.”

“We are placing a huge emphasis on social-emotional supports and working with our kids to build community. But we then have folks who are fearful that we may be sacrificing some of the academic time,” responded Group to the guidance. “I think the academics will come as long as our students are mentally healthy. So, I really appreciate your responses.”

Durson, on behalf of the Chamber Alliance - a committee of the Genesis Group, which has a presence in six Mohawk Valley towns and cities, 12 chambers of commerce and 11 affiliate partner organizations ... all serving the agenda of the greater community - thanked all of the participating college presidents for the time and insights they shared.

Concluded Durson, “The sun is shining. It’s another beautiful day in the Mohawk Valley Region.” 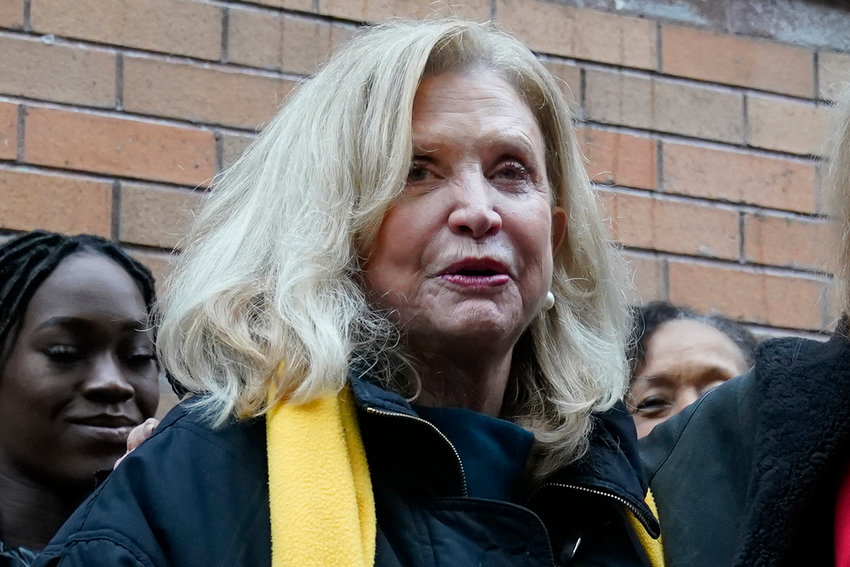 NEW YORK (AP) — New Yorkers pride themselves on the dynamism of their metropolis, where it can feel totally different on the next block, where tourists walking in Chinatown quickly find themselves …