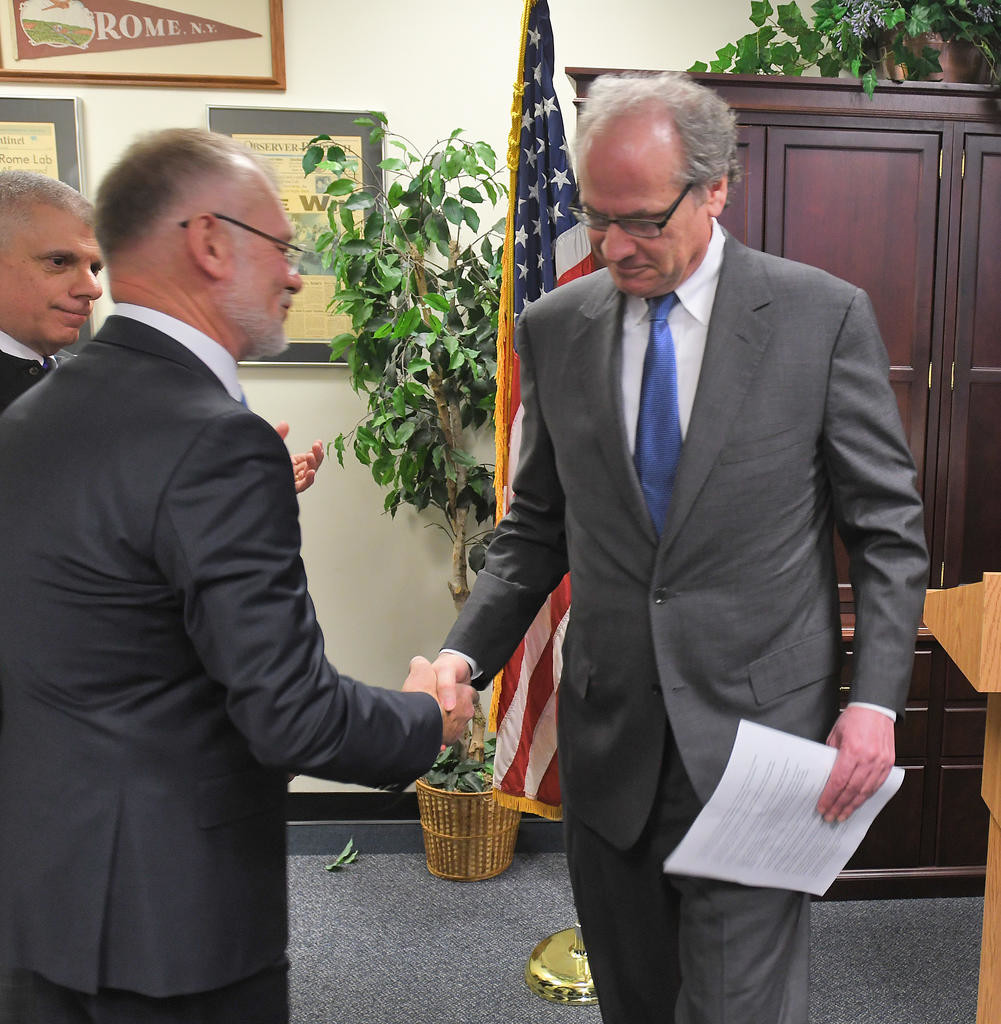 Friday’s announcement that an affiliate of Danfoss, a Danish supplier of power electronics, will establish packaging operations in the Computer Chip Commercialization Center on the SUNY Polytechnic Institute campus was warmly greeted by state and local officials.

The project is expected to create at least 300 new jobs. Danfoss Silicon Power GmbH, looks to be operational and serving its customers, including General Electric, in the Mohawk Valley by mid-year 2018. Limited hiring is specter to start next week.

New York will invest $100 million to complete portions of the complex that’s commonly called Quad-C, including construction, tools and equipment.

Danfoss, through a German affiliate, will lease both the facility and tools for 15 years.

The announcement by Empire State Economic Development Commissioner Howard Zemsky at the State Office Building in Utica helps cut the ongoing disappointment over the recent loss of a nanotechnology project at the Marcy Nanocenter, which adjoins the SUNY Poly campus. Late last year Austria-based computer chip maker ams AG abandoned plans to open a facility in Marcy, citing delays in moving the project forward. The state, which was blamed by local economic development and government officials for the delays, was going to build the facilities and lease them to ams for 20 years.

The operation was to have been home to ams AG’s advanced sensor manufacturing, more than $2 billion in initial private investment, and generate more than 1,000 new jobs in the Mohawk Valley.

There was no mention of the ams AG withdrawal at the Danfoss announcement.

Here are some comments from state and local leaders about the Quad-C news.

-- Empire State Development Commissioner Howard Zemsky: “When global companies like Danfoss choose the Mohawk Valley, it proves that companies creating cutting-edge technology are seeing Upstate New York as a great place to do business. The Mohawk Valley has a vision and strategic plan to create jobs and, under the leadership of Governor Cuomo, we are proud to support their efforts. Today’s announcement represents a significant investment in the region, and it demonstrates our continued commitment to spurring economic development and job creation while promoting groundbreaking nanoscience research and manufacturing from Albany to Utica.”

-- State Sen. Joseph A. Griffo, R-47, Rome: The Mohawk Valley is increasingly seen as a great place to live and work, and today’s announcement shows the progress we have made in Upstate New York. I would like to thank Danfoss for their commitment to job creation in Utica, and I look forward to the economic growth our region will continue to experience.”

-- Assemblyman Anthony J. Brindisi, D-119, Utica: “It is certainly great news that Danfoss is coming to the Mohawk Valley for a very significant partnership with GE and other companies that will bring several hundred new jobs to the region. This project not only brings great opportunities in the power electronics field for residents of our area, it also will allow students at SUNY Polytechnic Institute to gain valuable learning experiences in the field, strengthening its role in our state’s university system. With this announcement and others that I am confident will be on the horizon, I believe the future for our economy is bright. Having this exciting project in the state-of-the art Quad-C building right on the  SUNY Poly campus in Marcy will lead to other employers in nanotechnology and related fields considering our area as a good place to grow and expand in.”

-- Oneida County Executive Anthony J. Picente Jr.: “I’m pleased with today’s announcement as we continue to see development in the Nano Industry here in Oneida County. I want to welcome Danfoss to Utica and look forward to watching them grow and succeed here in the Mohawk Valley. I thank Governor Cuomo for his continued commitment to our area, the Nano Utica project and the growing Nanotechnology/Advanced Technology industry right here in Upstate NY.”

-- Rome Mayor Jacqueline M. Izzo: “This partnership represents a significant investment for the Mohawk Valley and will generate many new opportunities the City of Rome. We welcome the 300 direct new jobs coming to our region and look forward to building on this agreement. I thank Governor Cuomo, Empire State Development, SUNY Poly and Danfoss for making this possible.”

-- Mohawk Valley EDGE President Steven J. DiMeo: “These are exciting times in the Mohawk Valley as the region has solid momentum with the added investments at the Quad-C by Danfoss. This partnership adds to the high tech ecosystem already in place around the region, and compliments the developments happening at Marcy Nanocenter.”

-- Utica Mayor Robert Palmieri: “It’s exciting to have a new manufacturing operation come to Utica. I commend Governor Cuomo, and our partners in state government, as well as, MV EDGE and join them in welcoming Danfoss to our community with open arms. This is a positive step forward in our mutual efforts to expand transformational economic development opportunities for our region.”