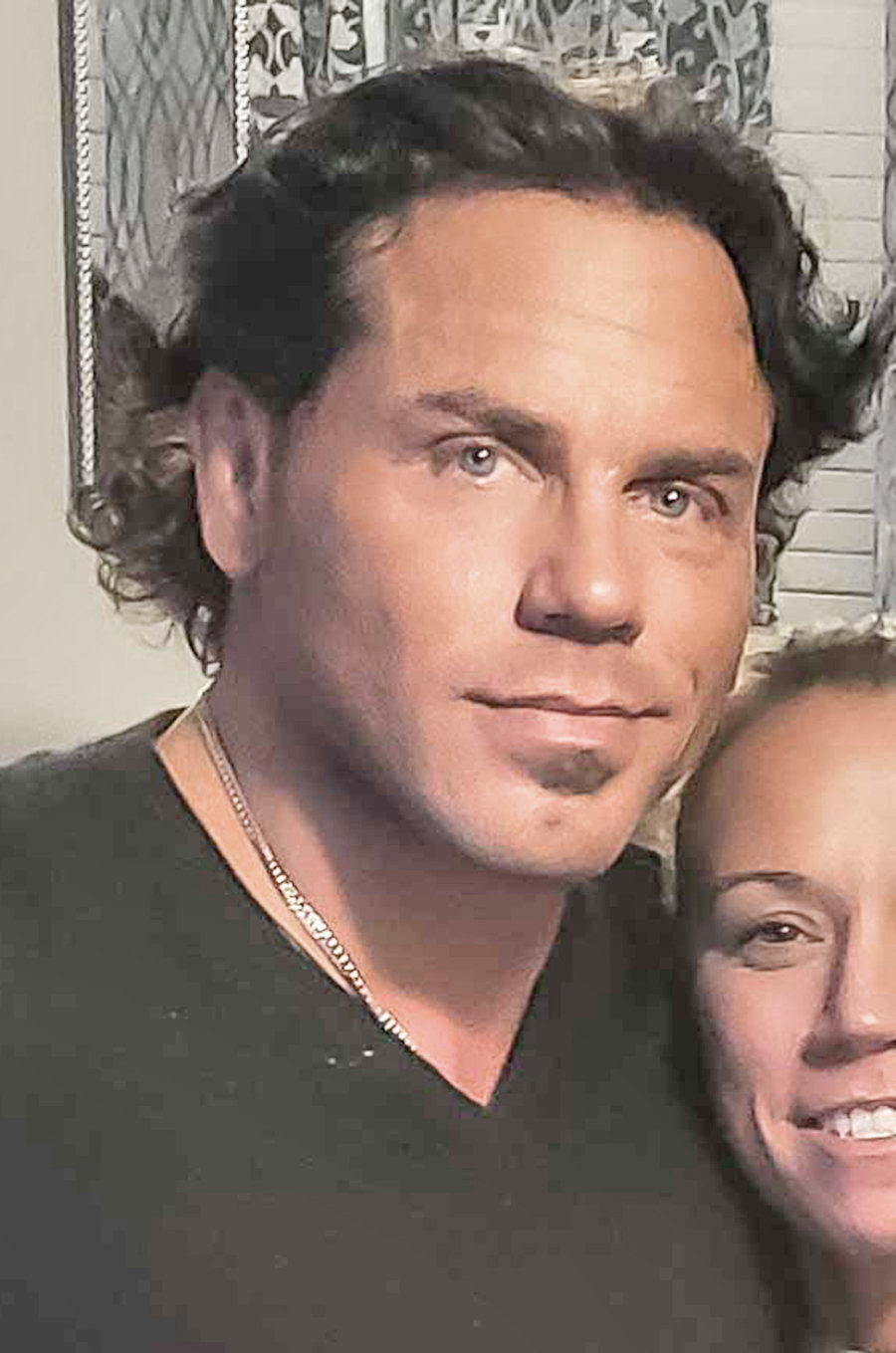 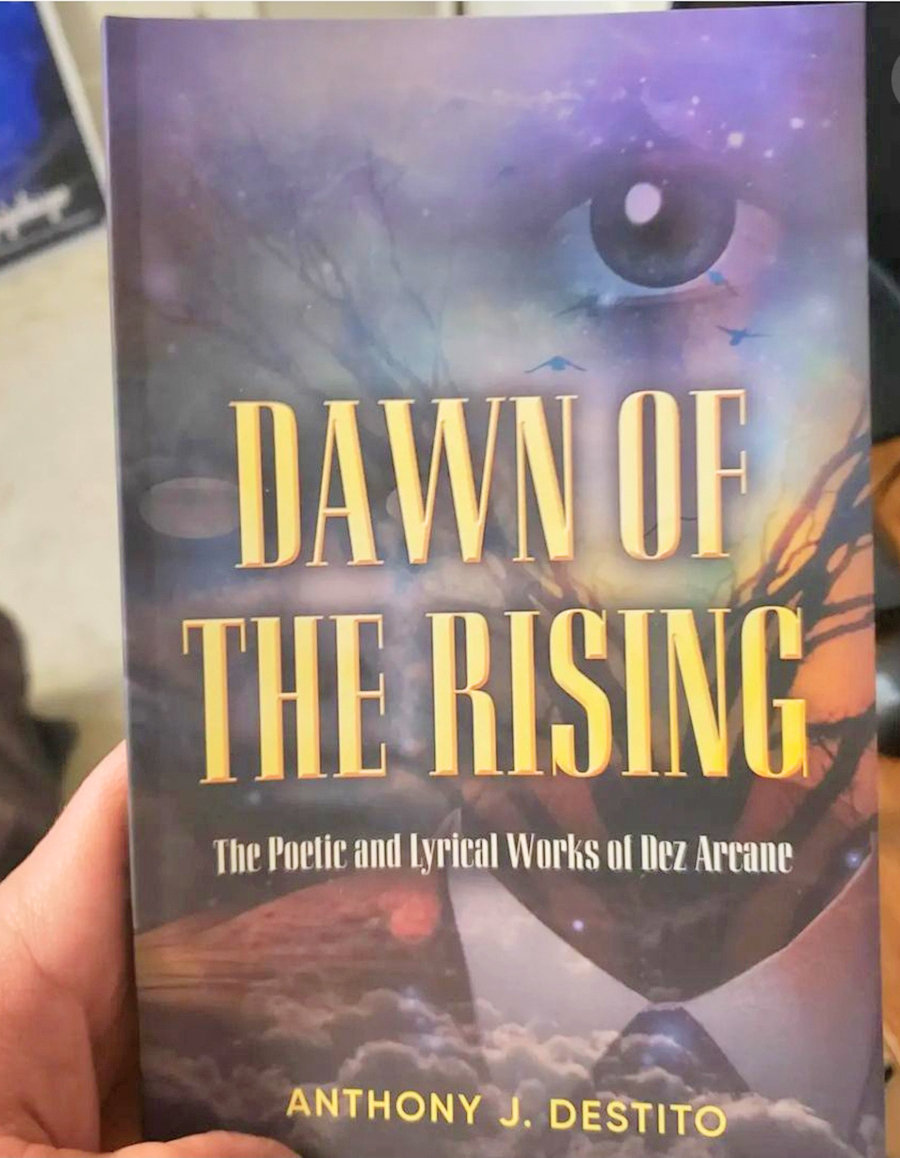 ROME — With a passion and fandom for hard rock and folk music artists, and with a keen eye on how technology is changing the way humans interact and live, local author Anthony J. Destito, who had been writing song lyrics “under lock and key” during his teens, has published a book of lyrics and poetry.

“Dawn of the Rising: the Poetic and Lyrical Works of Dez Arcane,” released earlier this month through Barnes & Noble booksellers, is Destito’s personal take and interpretations on how the world is changing, and his hopes for readers to achieve self-awareness.

According to the book’s prologue, “Whether 20 days ago, 20 years ago, or 2,000 years ago — wisdom and knowledge have largely gone by the wayside due to the distractions of technology and the digital age. Sacred sciences have become so protected, spiritual connection and authentic self awareness have become so convoluted, and the inability to think deeply and independently have led us to a world in chaos. Wars are raged, resources are manipulated, and people blindly follow the words and actions of people who are in the same boat, only with a public platform. We’ve become indoctrinated rather than educated.”

It says, “In a worldly sense, the mass of humanity has no choice but to awaken to its true self or face its own destruction — whether it be in facing the corruption seeded within every element of society, or the personal difficulties they face as a result. Social media has robbed us of the most fundamental aspect of the human experience: true interaction with others, with nature and with the world around us. A true dawning of self realization and return to what we truly are, which is a piece of a gigantic and mysterious yet beautiful cosmic puzzle, has been happening before our eyes — sometimes in small, barely noticeable offerings, sometimes in massive shifts that are unmistakable.”

“Dawn Of The Rising” is the author’s interpretations not only of this, but also in his personal experiences while witnessing, and being immersed in this revolutionary time in human consciousness.

Destito grew up in Rome, attending both Rome schools and Vernon-Verona-Sherrill Central Schools. He had moved away for about 10 years, spending time in Florida, New York City and out west, before moving back to his roots during the pandemic in 2021.

“I moved back to Rome in 2021 after COVID to be closer to my family, and just because I missed home and felt like it was time,” the author said. “I had largely left because I had a lot of stuff go on in my 20s — getting into trouble — just not really doing anything worthwhile or productive, so I just wanted to get away and kind of get myself together.”

Although Destito started writing in his teen years, “Most people had no idea,” he said. “I kind of kept it under lock and key — I wasn’t comfortable putting anything I wrote up for scrutiny.”

Through his younger years, Destito said his writing concentrated mainly on lyrics and his ideas for songs. His great influences included artists ranging from Axl Rose, Jim Morrison and Robert Hunger of the Grateful Dead, to Bob Dylan.

“What I always wanted to be was a musician, but I never really learned how to play any instruments back then, besides a little piano,” he said. “Eventually I let the idea go as I got into other things, but I never stopped writing because I needed the outlet.”

During the COVID-19 pandemic, like many others, Destito spent much of his time at home. But he spent his time being productive, writing at least 10-15 pieces a day.

“It was just rambling stuff about the world, personal observations, and just trying to make sense of my own life and experiences,” said Destito. “It was really therapeutic to me.”

Eventually, Destito said his stepbrother talked him into releasing his works as a collection of poetry.

“I figured why not, it’s just sitting around doing nothing. If I don’t put it out there somehow, there’s zero chance of it ever becoming what I wanted for it to become,” he realized.

“And its been great because just from the buzz of my social media circle, now I’m actually getting to work with some musicians locally, and trying to flesh out the ideas into actual songs with me doing vocals,” Destito said.

As for the “poetic and lyrical works of Dez Arcane,” Destito said that’s his “pen name and alter ego.” While available through Barnes & Noble, soon the book will also be found on Amazon.com, as well as on the shelves of some local book stores, Destito said. “Dawn of the Rising” is available as a hardcover for $25, or paperwork for $15.

“In essence, the book is a lot about the world today, how old societal structures and constraints are being broken down, sometimes for the better, sometimes for the worse,” Destito explained. “People are waking up to a lot of things going on with politics, the media, religion, etc., and they’re pissed off because they realize they’ve been lied to, and it manipulated most of their lives. There’s also a lot of personal stuff regarding my own experiences, relationships, and just general life.”

He continued, “In a way, it kind of echoes a tone of personal redemption — that sometimes you have to go through some really dark and uncomfortable things in order to reach. Having to confront a lot of demons and things that most people would rather just avoid and ignore, even though all it does is keep them trapped in the place they’re at and often unhappy with. My hope was that people who read it wouldn’t necessarily read it from my perspective, but their own and hopefully connect with it in their own way and apply/interpret it to themselves in a way that’s helpful somehow.”