The restoration of historic Guy Park Manor is finally under way in Amsterdam through a project that will make the landmark a more resilient community gathering space. 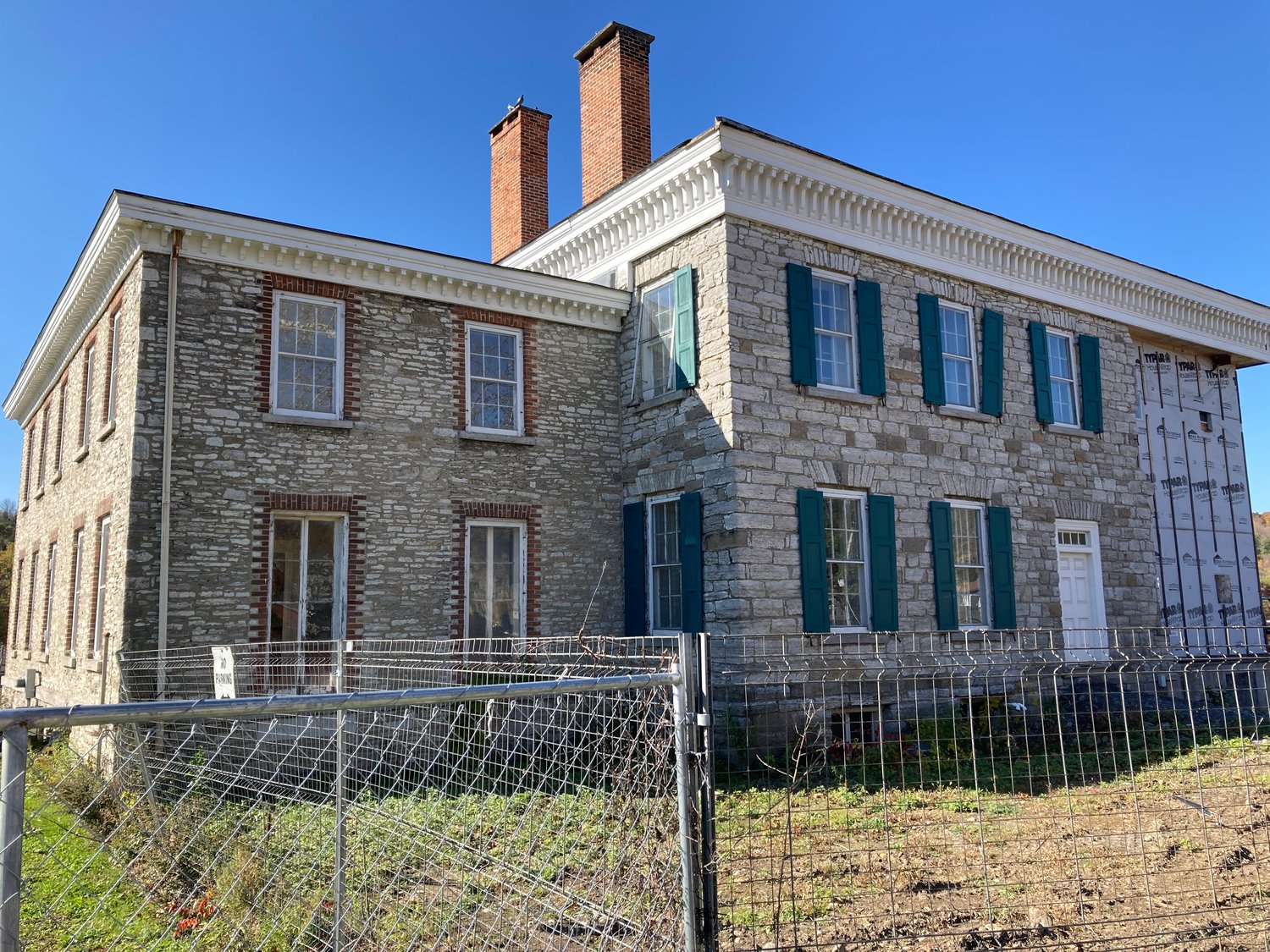 Both state and local officials were on hand for a press conference announcing the start of restoration work at the Guy Park Manor in Amsterdam on Friday, Oct. 21.
(Photo Ashley Onyon/The Daily Gazette)
Posted Monday, October 24, 2022 9:50 pm
Ashley Onyon, The Daily Gazette

AMSTERDAM — The restoration of historic Guy Park Manor is finally under way in Amsterdam through a project that will make the landmark a more resilient community gathering space.

New York Power Authority (NYPA) and Canal Corporation officials were joined by local leaders at the site to announce plans for the Guy Park Manor Environmental Education and Resiliency Park on Friday.

“Guy Park Manor is going to be restored to its original majestic splendor,” said Brian Stratton, director of the Canal Corporation. “We are building back smarter, better and more resilient.”

The approximately $36 million project will be fully funded by NYPA through the $300 million Reimagine the Canals initiative that is aimed at boosting tourism, mitigating flooding and enhancing recreational opportunities across the state Canal System.

“The New York Power Authority and Canal Corporation are committed to ensuring the preservation of historic sites that sit along the canal and that includes Guy Park Manor,” said Justin Driscoll, interim president and CEO of NYPA.

The two phase project will restore the historic manor house and create new educational facilities and community gathering spaces inside and out capable of withstanding severe weather events in the future.

“Since being severely damaged in Hurricane Irene and Tropical Storm Lee in 2011, this incredible piece of our shared history has sat untouched and unused, but now I’m thrilled to announce the start of Guy Park Manor Environmental Education and Resiliency Park,” Driscoll said. “A major preservation and rehabilitation project.”

The first phase will involve the restoration of the manor house and interventions to protect the structure from future weather events by raising the building 3.6 feet to place the first floor 7 feet above the 100-year flood elevation.

A new reinforced concrete foundation will further protect the building, along with flood vents that will be installed in the basement to allow water to enter and exit the lower level of the manor in case the Mohawk River overflows its banks.

The exterior masonry will be restored beginning this winter once imminent asbestos abatement work is completed. Other work will include the installation of a new slate roof, rebuilding of the west chimneys, restoration of the windows and doors and reconstruction of the south porch to add an accessible wheelchair lift.

The interior of the manor will be restored and finished to incorporate new exhibits developed in partnership with the Erie Canal Museum in Syracuse and multipurpose rooms for community use. New heating, cooling, electrical, plumbing, fire and security systems will be installed on the upper floors to protect against basement flood damage.

That initial work will be performed by VMJR Companies out of Glens Falls and is targeted for completion in summer 2024.

The second phase will create an educational landscape and demonstration gardens supporting a public park and recreation programs on the 12-acre property. Construction of a pavilion will further support outdoor activities and events.

A public walkway on the movable dam at Erie Canal Lock 11 will connect the site to the Empire State Trail on the opposite side of the Mohawk River. A new fishing platform and kayak launch will provide access to the water. Landscaped earthen berms will also be installed on the grounds to help protect the manor house and property from weather events while creating a welcoming area for visitors. The second phase work is expected to be completed in summer 2026.

The announcement of the restoration project that has been years in the making was celebrated by Mayor Michael Cinquanti as supporting revitalization efforts in Amsterdam and returning to form the manor house built in 1776 in time for its milestone 250th birthday.

“This welcome investment on the part of the [NYPA] and Canal Corporation, will assure that our city’s most treasured landmark from the colonial era will celebrate that birthday in pristine condition and serve as the functioning centerpiece of a unique and educational canalside experience,” Cinquanti said.

Plans for the restoration of Guy Park Manor have evolved since state officials announced a concept that proposed to convert the site into a hospitality center featuring a boutique hotel, event space or spa in 2020.

That idea was discarded after discussions with local officials and a market study assessing the needs of the community made it clear that public and educational facilities would best fit the historic site, according to Shane Mahar, NYPA spokesperson.

“Investments in the cultural and economic assets that strengthen our region are critical in our efforts to revitalize our canalside communities,” said U.S. Rep. Paul Tonko, D-Amsterdam.

“We know how much Guy Park Manor is a special place for all of us, it is a beloved spot,” Stratton said. “It is truly special that we have the opportunity to both rehabilitate a historic landmark, while creating a community asset that will serve as a destination.”