“We pray for peace.” It was with a heavy, yet hopeful heart that Ganna (Anna) Leonchyk raised her right hand, along with 47 of her peers inside the U.S. District Courthouse in Utica Thursday, … 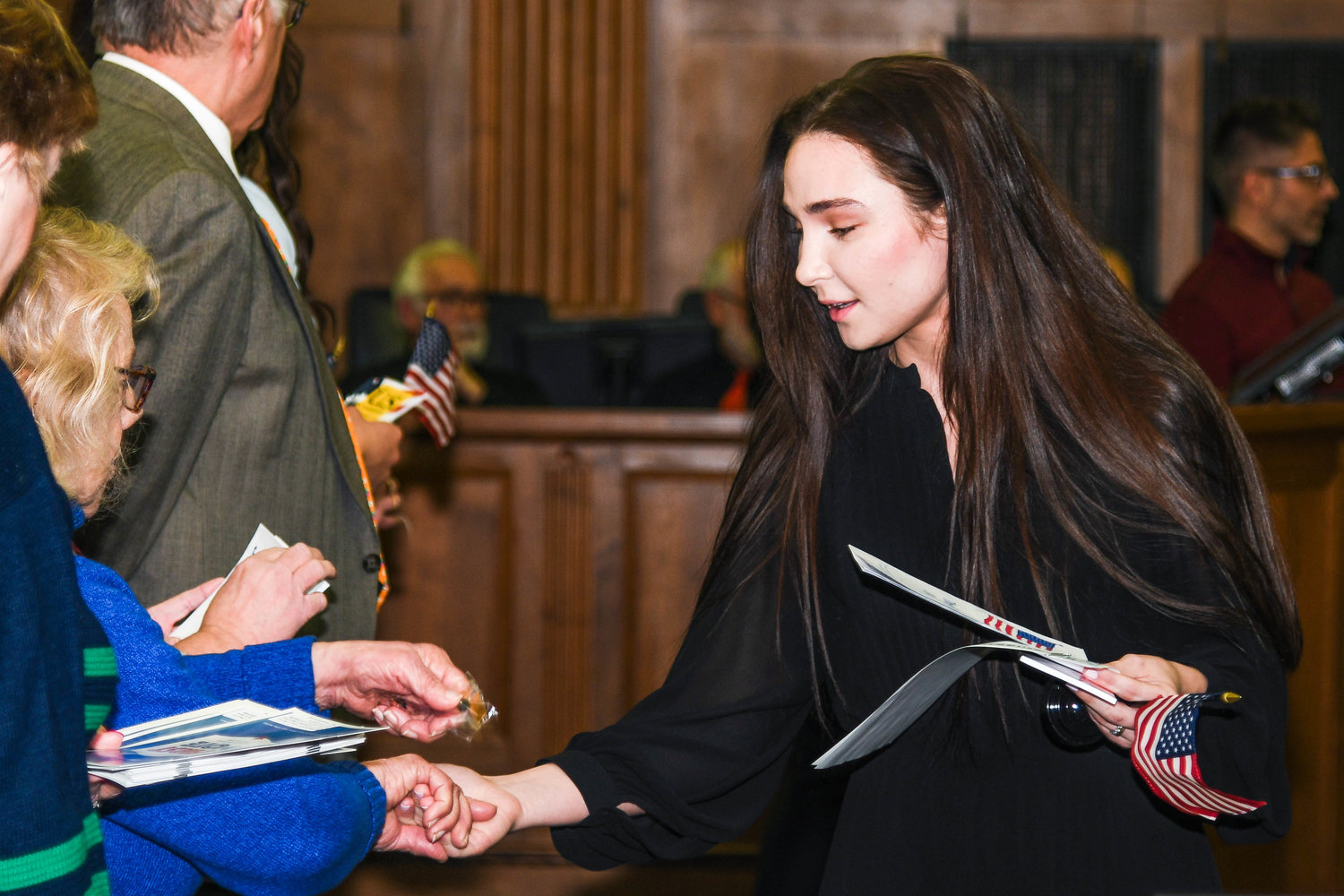 SIGN OF HOPE — Ukraine-native Ganna “Anna” Leonchyk receives her U.S. Certificate of Citizenship during a naturalization ceremony on Thursday at the U.S. Northern District of New York Courthouse in Utica. Forty-eight individuals representing 24 nations from around the world were sworn in as new citizens.
(Sentinel photo by Alex Cooper) 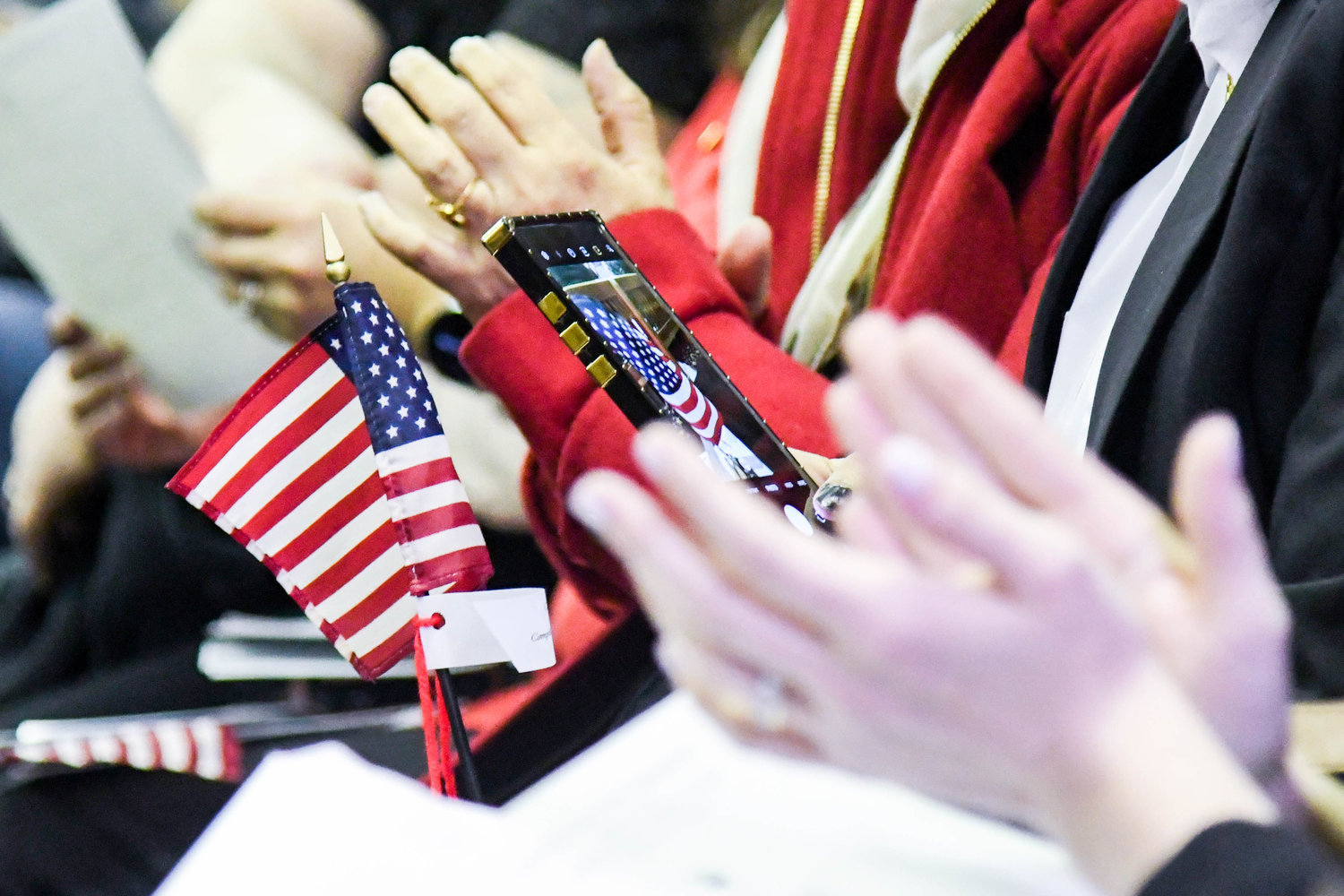 TO BE AN AMERICAN — Forty-eight residents representing 24 nations from around the world were sworn in as new American citizens during a naturalization ceremony on Thursday at the Utica Federal Courthouse on Broad Street.
(Sentinel photo by Alex Cooper)
Previous Next
Posted Friday, March 11, 2022 5:31 am
Nicole A. Hawley
Staff writer
email / twitter

“We pray for peace.”

It was with a heavy, yet hopeful heart that Ganna (Anna) Leonchyk raised her right hand, along with 47 of her peers inside the U.S. District Courthouse in Utica Thursday, officially taking the Oath of Allegiance as a new American citizen.

Leonchyk is a native of Ukraine, a place she will always know as her childhood home. Her brother and his family, along with cousins and other extended family, are still living in the war-torn Slavic nation, initially attacked by Russian forces on Feb. 24.

The on-going attacks ordered by Russian President Vladimir Putin in attempts to take the country by force, to-date, has claimed at least 13,000 lives and displaced 2.3 million citizens, according to reports.

Asked about the impact of the conflict, Leonchyk said, “peaceful people are dying.”

The young woman who is looking forward to attending college, said she has mixed feelings about the U.S. and world response to the war in her native land. She is originally from Rivne, which is about “4 hours away” from Kiev, she said.

“Here I am in a place where everything is peaceful that is now my home, it’s so hard to watch what is going on” in the Ukraine, Leonchyk said. “I can’t (directly) feel what they are going through there, but it’s very scary.”

Seeing what is happening in the Ukraine, “makes me want to help people,” particularly those like her, who have come to American to seek out a new life.

“We need to help those around us create a better place,” she said. “My brother and his family, my cousins, are still there and we’re trying to support them as much as we can.”

Leonchyk said she and all Ukrainians are grateful to those around the world who are against Russia’s actions, and that she has pride for how the Ukraine has defended itself.

“One good thing to see is how the Ukraine is so united and so brave,” Leonchyk said. “Even though it’s such a small country, the people won’t give up. It’s sad and heartbreaking, but I think this unites the Ukraine with all the countries who stand for freedom, and this will make us stronger.”

As for the U.S. and world involvement in the conflict, “I have mixed thoughts. I understand” countries “aren’t going into the Ukraine because they don’t want to start WW III,” said Leonchyk. “I understand why they’re (the U.S. and other nations) not going in with their military. But people are dying there, families — peaceful people are being killed even in cars as they’re trying to make their escape. I understand why more involvement is not happening, but at the same time, people I know are dying. My heart wishes things could change.”

In his welcome to those anxiously awaiting to take their Oath of Allegiance, U.S. District Court Judge for the Northern District of New York David N. Hurd recognized the nations being represented at Thursday’s naturalization ceremony, and gave special attention to the representation of the Ukraine.

Judge Hurd asked for a special round of applause for the Ukraine, with some giving a standing ovation to Leonchyk as she stood to be recognized. Among the other native countries being recognized at the ceremony included Burma, Ecuador, Columbia, Bosnia-Herzegovina, Iraq, Jordan, Somalia, Vietnam, Armenia, Afghanistan, Bhutan and Yemen.

Hurd pointed out that as American citizens, they gain a number of rights like the freedom of speech, religion and assembly. But the most important, for which they are all now obligated, is the right to vote, he said.

“After today you will all be eligible to vote,” said Hurd. “And you will never be in a room like this in your life where there is so much diversity.”

Judge Hurd’s opening words were joined by the Presentation of Colors by members of New Hartford American Legion Post 1376 and the singing of the National Anthem by Firestorm Barbershop Quartet.

Guest speaker Rocco LaDuca, local journalist and co-host of the Talk of the Town morning radio show on 100.7 FM, expressed how emotional it was to be part of his first naturalization ceremony and be part of the “completion of an important journey” for the new citizens. LaDuca said everyone should be recognized for having their own story of what it means to be an American.

LaDuca talked about the freedoms enjoyed by Americans, including one he appreciated every day — the freedom of the press. He spoke about the important role journalism plays in helping voices be heard and holding governments accountable. He pointed out that in some countries, people can be arrested simply for what he knows as doing his job.

LaDuca then became emotional when he recalled a recent conversation with a woman at the local coffee shop from Belarus, when he asked her what it meant to be an American.

“’In America, you can be whatever you want to be,’ she said, which is a beautiful, simple idea,” said LaDuca. “But what she followed with was equally important, ‘But you have to know what you want, and have a plan in how to achieve it, she said.’”

Poe Hser Robin Htoo, a native of Burma representing the new citizens, also offered words of encouragement to those who joined him at the ceremony. Htoo, who Judge Hurd said spent 28 years in a refugee camp in Thailand, and worked hard to learn enough English to be able to get a job when he soon arrived to Utica back in 2016, had never been a citizen of any country before Thursday.

“There’s so many beautiful people here,” said Htoo. “So many people helped me be here today, and to stay here. Bless all the new citizens.”

After a performance and singing of God Bless America, Judge Hurd closed the ceremony with a reading of the poem, “The Miracle of Morning,” by inaugural poet Amanda Gorman.

“You are equal to any natural-born citizen in the U.S. and I can only imagine what you folks have gone through to make it here today — to make it a ‘miracle morning,’” Hurd told the crowd. “This nation is so much richer for each of you. Every single one of you is very much needed — your energy and your original ideas.”