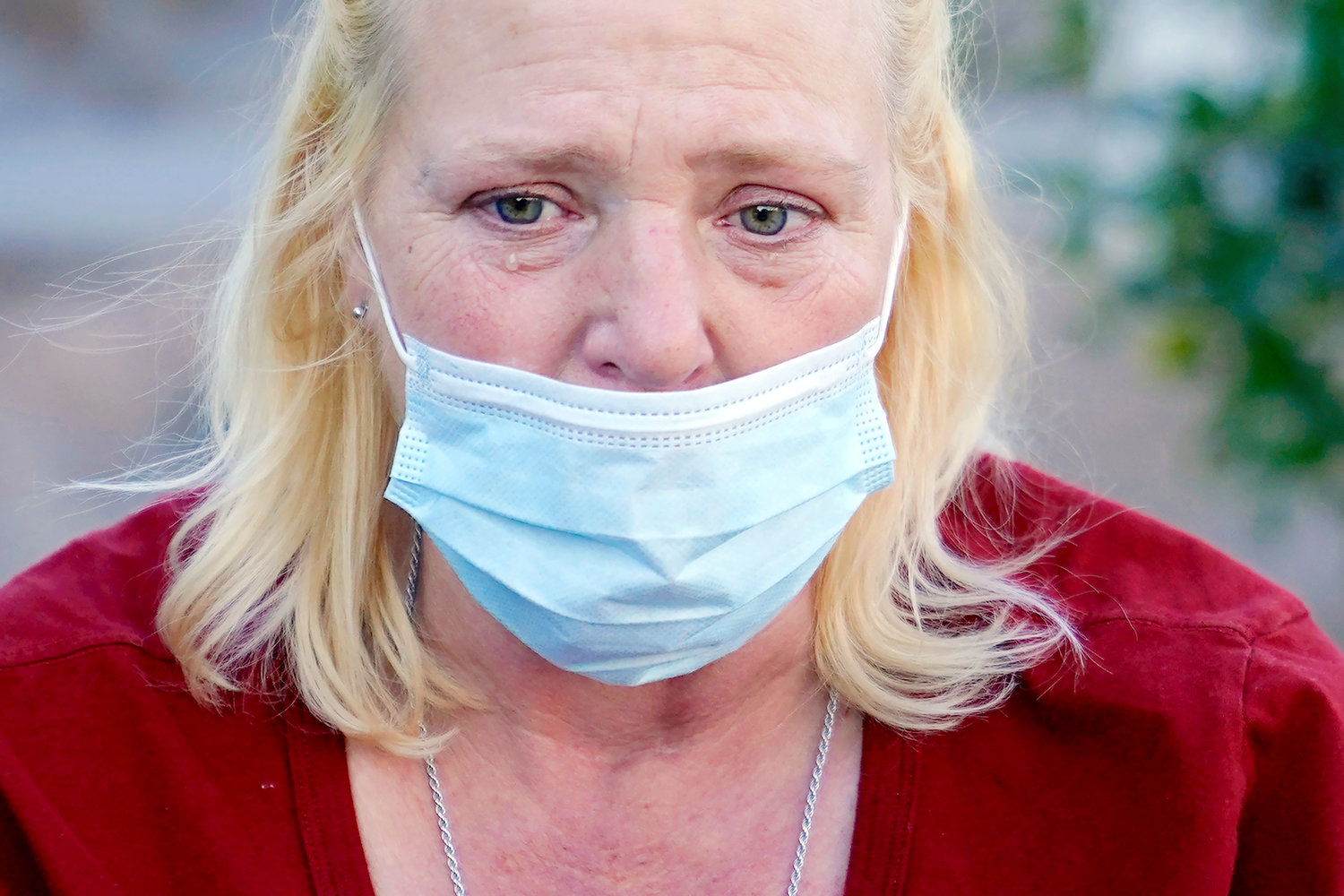 Karla Finocchio, 55, tears up as she talks about being a homeless woman on the streets on Jan. 24 in Phoenix. Finocchio is one face of America’s graying homeless population, a rapidly expanding group of destitute and desperate people 50 and older suddenly without a permanent home after a job loss, divorce, family death or health crisis during a pandemic.
(AP Photo/Ross D. Franklin) 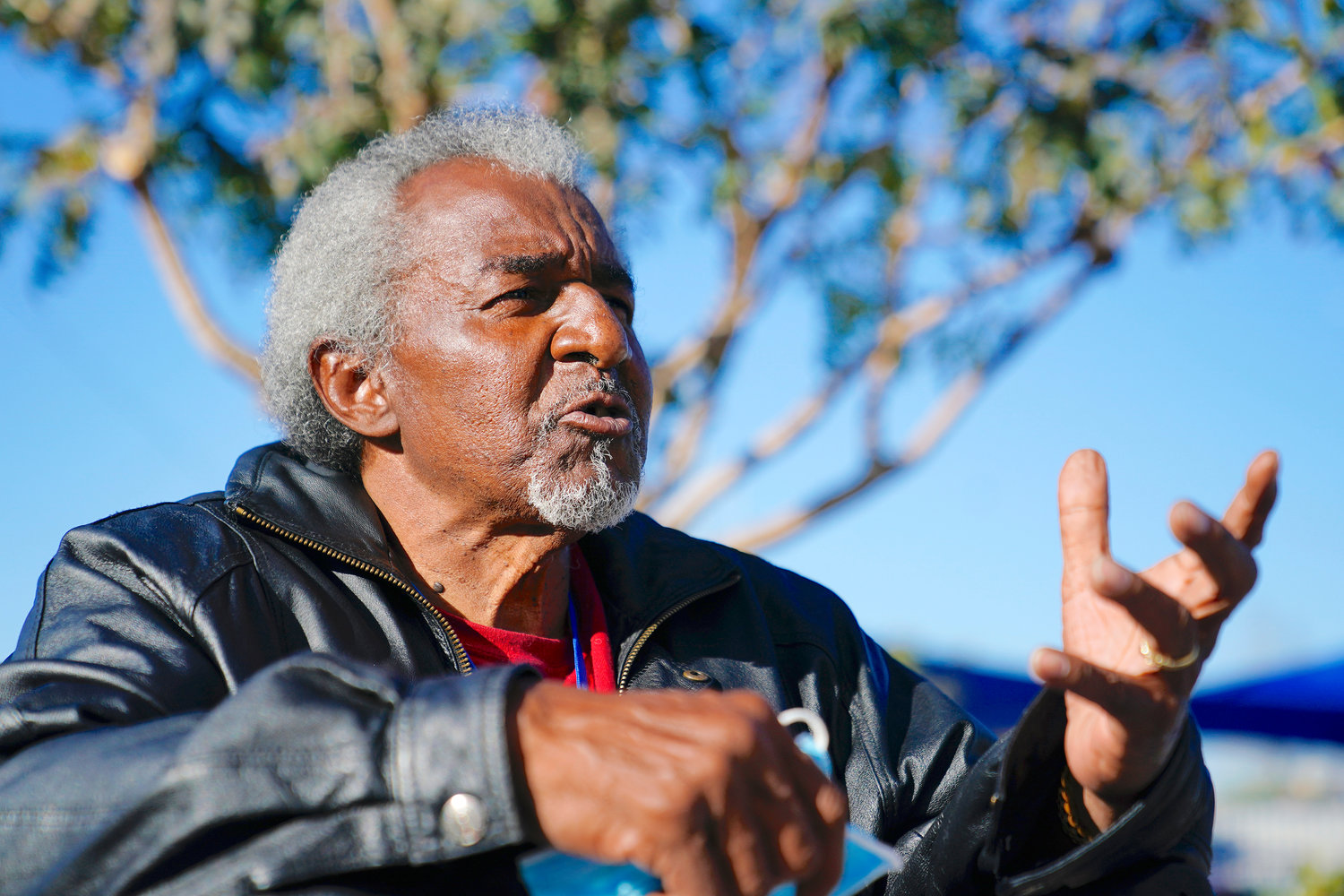 Lovia Primous, 67, speaks with some of his friends at the Ozanam Manor temporary housing for older persons on Jan. 24 in Phoenix. A stroke started 67-year-old Army veteran Lovia Primous on his downward spiral, costing him his job and forcing him to sleep in his Honda Accord. He was referred to the transitional shelter after recovering from COVID-19.
(AP Photo/Ross D. Franklin) 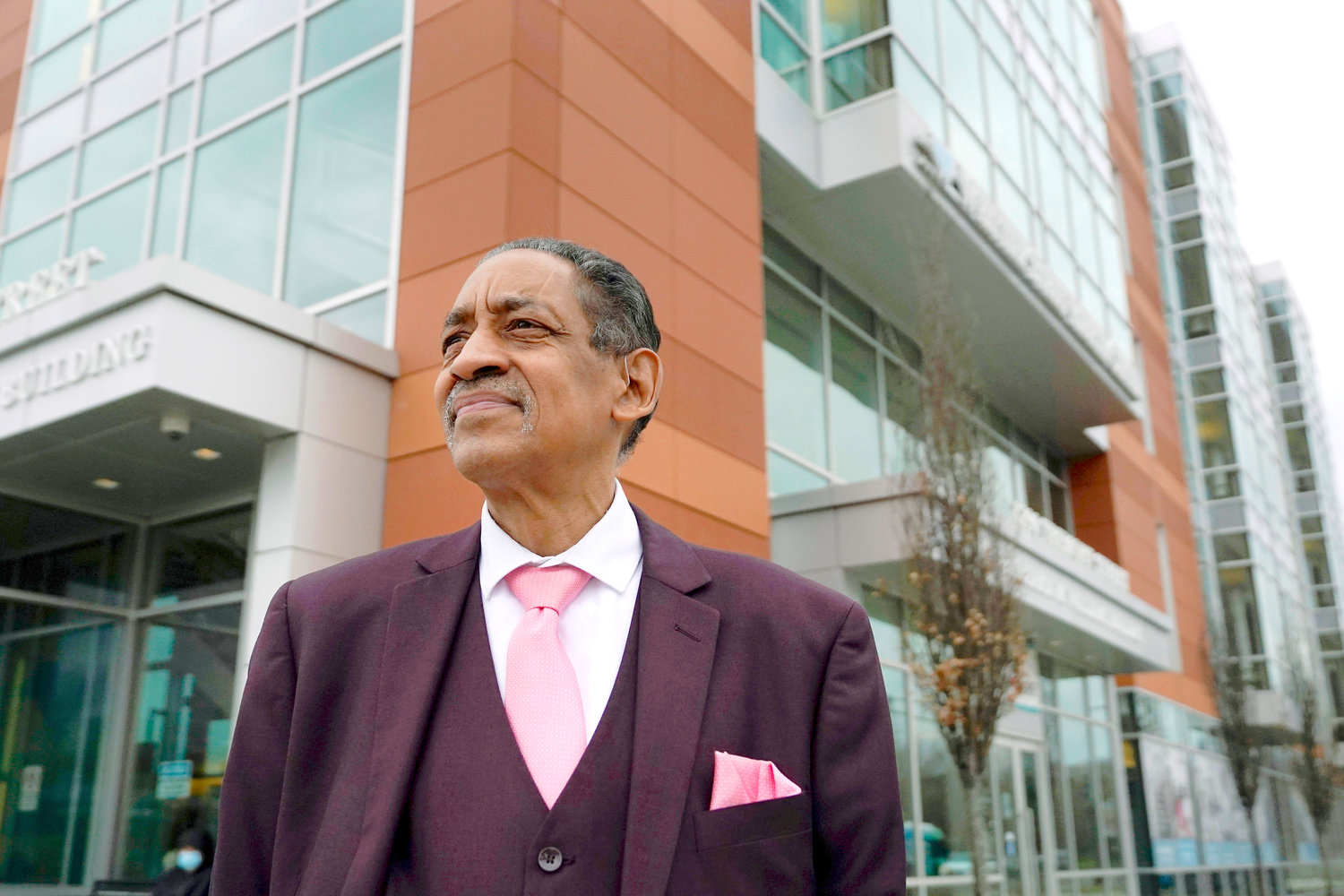 Nestor Castro, 67, of Cambridge, Mass., stands for a photograph, on March 31 at Whittier Street Health Center, in Boston, where he volunteers. Just before Christmas in 2021, Castro got a permanent subsidized apartment through Hearth Inc., a Boston nonprofit dedicated to ending homelessness among older adults.
(AP Photo/Steven Senne) 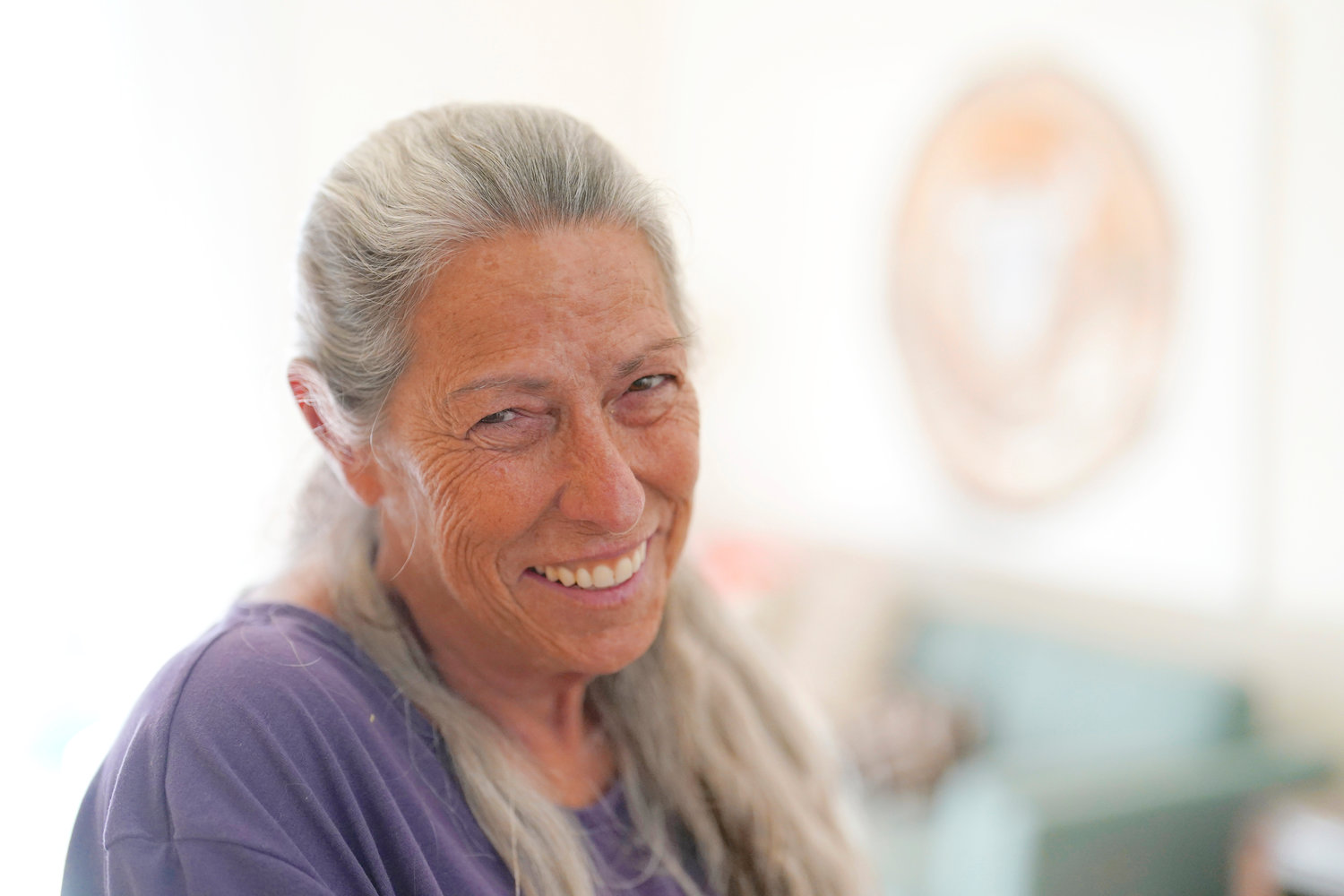 Susan, who asked to use only her first name because of the stigma around homelessness, stands in her new apartment, shortly after new furniture arrived, on March 17, in San Diego. The 63-year-old had kidney cancer while caring for her mother, then lost their two-bedroom apartment after her mom died.
(AP Photo/Gregory Bull)
Previous Next
Posted Monday, April 11, 2022 12:09 pm
Anita Snow, Associated Press

PHOENIX  — Karla Finocchio’s slide into homelessness began when she split with her partner of 18 years and temporarily moved in with a cousin.

The 55-year-old planned to use her $800-a-month disability check to get an apartment after back surgery. But she soon was sleeping in her old pickup protected by her German Shepherd mix Scrappy, unable to afford housing in Phoenix, where median monthly rents soared 33% during the coronavirus pandemic to over $1,220 for a one-bedroom, according to ApartmentList.com.

Finocchio is one face of America’s graying homeless population, a rapidly expanding group of destitute and desperate people 50 and older suddenly without a permanent home after a job loss, divorce, family death or health crisis during a pandemic.

“We’re seeing a huge boom in senior homelessness,” said Kendra Hendry, a caseworker at Arizona’s largest shelter, where older people make up about 30% of those staying there. “These are not necessarily people who have mental illness or substance abuse problems. They are people being pushed into the streets by rising rents.”

Academics project their numbers will nearly triple over the next decade, challenging policy makers from Los Angeles to New York to imagine new ideas for sheltering the last of the baby boomers as they get older, sicker and less able to pay spiraling rents. Advocates say much more housing is needed, especially for extremely low-income people.

Navigating sidewalks in wheelchairs and walkers, the aging homeless have medical ages greater than their years, with mobility, cognitive and chronic problems like diabetes. Many contracted COVID-19 or couldn’t work because of pandemic restrictions.

“It’s so scary,” said Finocchio, her green eyes clouding with tears while sitting on the cushioned seat of her rolling walker. “I don’t want to be on the street in a wheelchair and living in a tent.”

It was Finocchio’s first time being homeless. She’s now at Ozanam Manor, a transitional shelter the Society of St. Vincent de Paul runs in Phoenix for people 50 and up seeking permanent housing.

At the 60-bed shelter, Finocchio sleeps in a college-style women’s dorm, with a single bed and small desk where she displays Scrappy’s photo. The dog with perky black ears is staying with Finocchio’s brother.

A stroke started 67-year-old Army veteran Lovia Primous on his downward spiral, costing him his job and forcing him to sleep in his Honda Accord. He was referred to the transitional shelter after recovering from COVID-19.

“Life has been hard,” said Primous, who grew up on in a once- segregated African American neighborhood of south Phoenix. “I’m just trying to stay positive.”

Cardelia Corley ended up on the streets of Los Angeles County after the hours at her telemarketing job were cut.

Now 65, Corley said she was surprised to meet so many others who were also working, including a teacher and a nurse who lost her home following an illness. “I’d always worked, been successful, put my kid through college,” the single mother said. “And then all of a sudden things went downhill.”

Corley traveled all night aboard buses and rode commuter trains to catch a cat nap.

“And then I would go to Union Station downtown and wash up in the bathroom,” said Corley. She recently moved into a small East Hollywood apartment with help from The People Concern, a Los Angeles nonprofit.

The U.S. Department of Housing and Urban Development said in its 2017 Annual Homeless Assessment Report the share of homeless people 50 and over in emergency shelters or transitional housing jumped from 22.9% in 2007 to 33.8% in 2017. More precise and recent nationwide figures aren’t available because HUD has since changed the methodology in the reports and lumps older people in with all adults over 25..

A 2019 study of aging homeless people led by the University of Pennsylvania drew on 30 years of census data to project the U.S. population of people 65 and older experiencing homelessness will nearly triple from 40,000 to 106,000 by 2030, resulting in a public health crisis as their age-related medical problems multiply.

Dr. Margot Kushel, a physician who directs the Center for Vulnerable Populations at the University of California, San Francisco, said her research in Oakland on how homelessness affects health has shown nearly half of the tens of thousands of older homeless people in the U.S. are on the streets for the first time.

“We are seeing that retirement is no longer the golden dream,” said Kushel. “A lot of the working poor are destined to retire onto the streets.”

That’s especially true of younger baby boomers, now in their late 50s to late 60s, who don’t have pensions or 401(k) accounts. About half of both women and men ages 55 to 66 have no retirement savings, according to the census.

The aged homeless also tend to have smaller Social Security checks after years working off the books. A third of some 900 older homeless people in Phoenix said in a recent survey they have no income at all.

Susan, who stayed at one lot, spoke only if her last name wasn’t used because of the stigma surrounding homelessness.

The 63-year-old had kidney cancer while caring for her mother, then lost their two-bedroom apartment after her mom died. The cancer is now in remission.

Susan slept in her car with her dog at one of the gated parking lots that provide a bathroom, showers and a shared refrigerator and microwave.

She was stunned to see a man in his 80s living in a car there, calling it “just wrong.”

But residents enjoyed the community, grilling meals together and even surprising one in their group with a birthday cake.

Dreams for Change recently helped Susan get a one-bedroom apartment with a housing voucher after months of waiting.

With a washer and dryer, patio, dishwasher and bathtub, “I feel like I’m at the Ritz,” she said.

Donald Whitehead Jr., executive director of the Washington-based advocacy group National Coalition for the Homeless, said that seeing older people sleep in cars and abandoned buildings should worry everyone.

“We now accept these things that we would have been outraged about just 20 years ago,” said Whitehead.

Whitehead said Black, Latino and Indigenous people who came of age in the 1980s amid recession and high unemployment rates are disproportionately represented among the homeless.

“So many of us didn’t put money into retirement programs, thinking that Social Security was going to take care of us,” said Rudy Soliz, 63, operations director for Justa Center, which offers meals, showers, a mail drop and other services to the aged homeless in Phoenix.

The average monthly Social Security retirement payment as of December was $1,658. Many older homeless people have much smaller checks because they worked fewer years or earned less than others.

People 65 and over with limited resources and who didn’t work enough to earn retirement benefits may be eligible for Supplemental Security Income of $841 a month.

Finocchio said limited contributions were made for her into Social Security and Medicare because most of her jobs were off the books in telephone sales or watering office plants.

“The programs approved by Congress to prevent destitution among the elderly and the disabled are not working,” said Dennis Culhane, a University of Pennsylvania professor who led the 2019 study of the aging homeless in New York, Boston and Los Angeles County. “And the problem is only going to get worse.”

Jennifer Molinsky, project director for the Aging Society Program at Harvard University’s Joint Center for Housing Studies, agreed the federal government must do more to ensure older Americans are better housed. “The younger boomers were hit especially hard in the Great Recession, many losing their homes close to retirement,” Molinsky said.

Longer term shelters specifically for older people are helping get some off the streets at least temporarily.

The Arizona Department of Housing last year provided a $7.5 million block grant for the state’s largest shelter to buy an old hotel to temporarily house up to 170 older people without a place to stay. The city of Phoenix kicked in $4 million for renovations.

CEO Lisa Glow of Central Arizona Shelter Services, which runs the state’s biggest shelter in downtown Phoenix, said the hotel is expected to open by year’s end. Residents will stay around 90 days while caseworkers help find permanent housing “We need more dignified, safer and comfortable places for our seniors,” said Glow, noting that physical limitations make it difficult for older people at the 500-bed shelter downtown.

Nestor Castro, 67, was luckier than many who lose permanent homes. Castro was in his late 50s living in New York when his mother died and he was hospitalized with bleeding ulcers, losing their apartment. He initially stayed with his sister in Boston, then for more than three years at a YMCA in Cambridge, Massachusetts.

Just before last Christmas, Castro got a permanent subsidized apartment through Hearth Inc., a Boston nonprofit dedicated to ending homelessness among older adults. Residents pay 30% of their income to stay in one if Hearth’s 228 units.

Hearth Inc. CEO Mark Hinderlie said far more housing needs to be built and made affordable for the aged, especially now as the numbers of graying homeless people surge.

“It’s cheaper to house people than leave them homeless,” Hinderlie said. “You have to rethink what housing can be.”