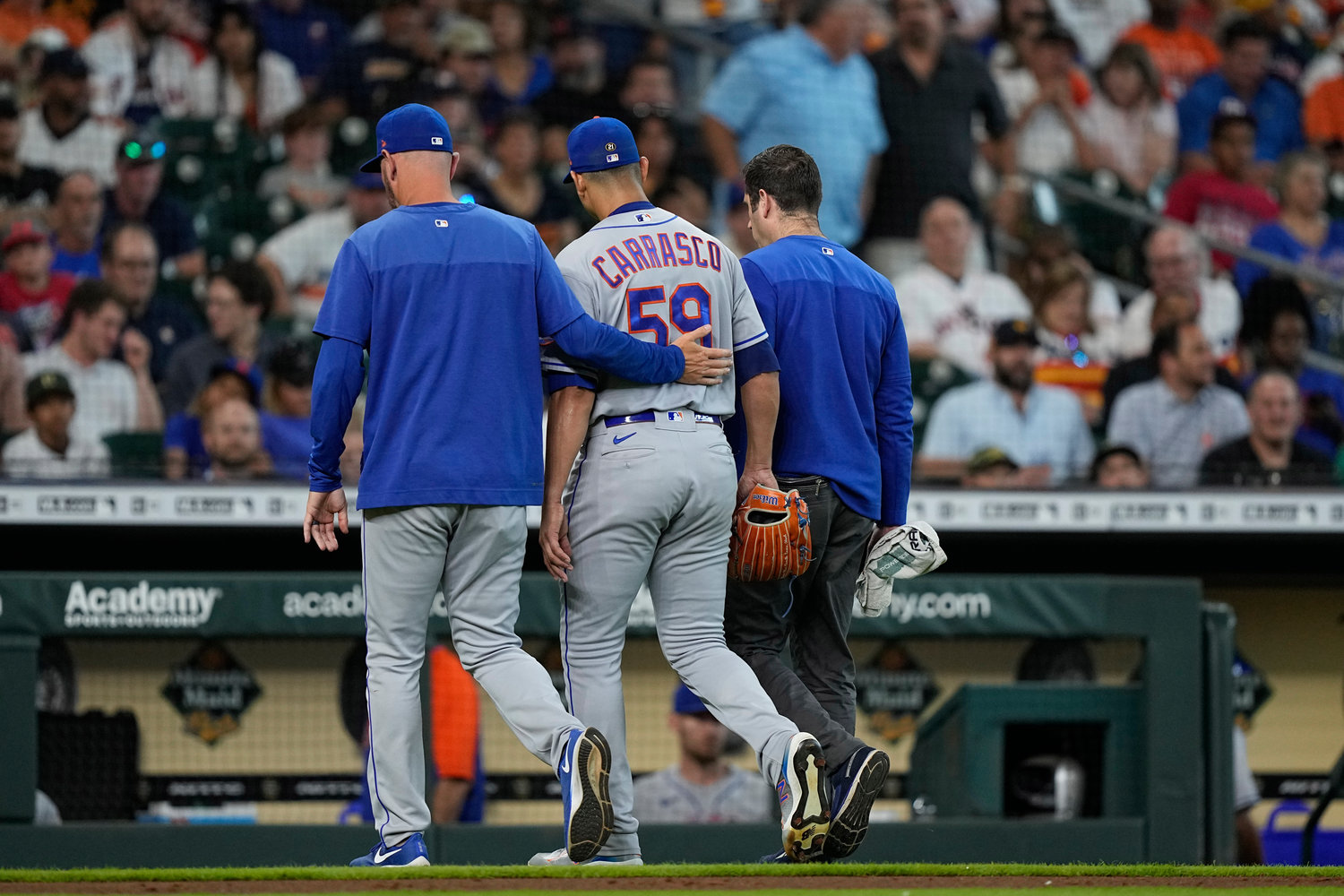 HOUSTON  — Yordan Alvarez homered twice off Carlos Carrasco as the Houston Astros jumped on him early and held on for a 5-3 win over the New York Mets on Wednesday.

Alvarez hit two of the season-high three homers Carrasco (8-3) allowed before the pitcher left with lower back tightness in the third inning with the Astros up 5-1.

Alvarez, who also homered Tuesday night, now has 21 this season to move into a tie with Mike Trout for second-most in the majors. His home run barrage in this series comes after he missed Sunday’s game with a minor hand injury. The 24-year-old Alvarez leads all players with a 1.064 OPS and has hit nine homers in his last 20 games.

Alex Bregman added a two-run home run for the Astros, who won their third straight.

The National League-leading Mets entered this series having won four of five games but continued to struggle in Houston where they’ve dropped eight in a row.

Houston starter Luis García (5-5) yielded six hits and three runs with five strikeouts in five-plus innings for the win. Ryan Pressly pitched a scoreless ninth for his 14th save.

Carrasco yielded four hits and five runs in 2 1/3 innings before his injury. Though it’s unclear if this issue will keep Carrasco out for an extended period, it could be another blow for a team already missing star pitchers Max Scherzer and Jacob deGrom with injuries.

Jose Altuve got things going when he drew a leadoff walk before scoring on a double by Michael Brantley. Bregman’s homer to left field made it 3-0. Houston went back-to-back when Alvarez followed with his homer on a ball that landed in the bullpen in right-center.

Dominic Smith opened the third inning with a double and advanced to third on a groundout by Tomás Nido. The Mets cut the lead to 4-1 when Smith scored on a sacrifice fly by Brandon Nimmo.

There was one out in the third when Alvarez connected again, this time launching a fastball from Carrasco into the second deck in right field to make it 5-1. It’s the fourth multi-homer game this season for Alvarez and the first since May 30.

Carrasco walked Kyle Tucker before throwing two pitches to Yuli Gurriel and calling trainers to the mound. They talked to Carrasco for a minute before he left the game and was replaced by Yoan López.

García walked Nimmo to start the sixth and he scored on a double by Starling Marte to cut the lead to 3. Francisco Lindor singled to chase García, and Ryne Stanek took over. Pete Alonso’s sacrifice fly scored Marte to get New York within 5-3.

Luis Guillorme doubled, and Mark Canha walked to load the bases. The Astros preserved the lead when Stanek retired Eduardo Escobar on a pop up before striking out Smith to end the inning.