There aren’t any formal age restrictions for who is and isn’t allowed to join The Frederick Center’s Aging With Pride support group. 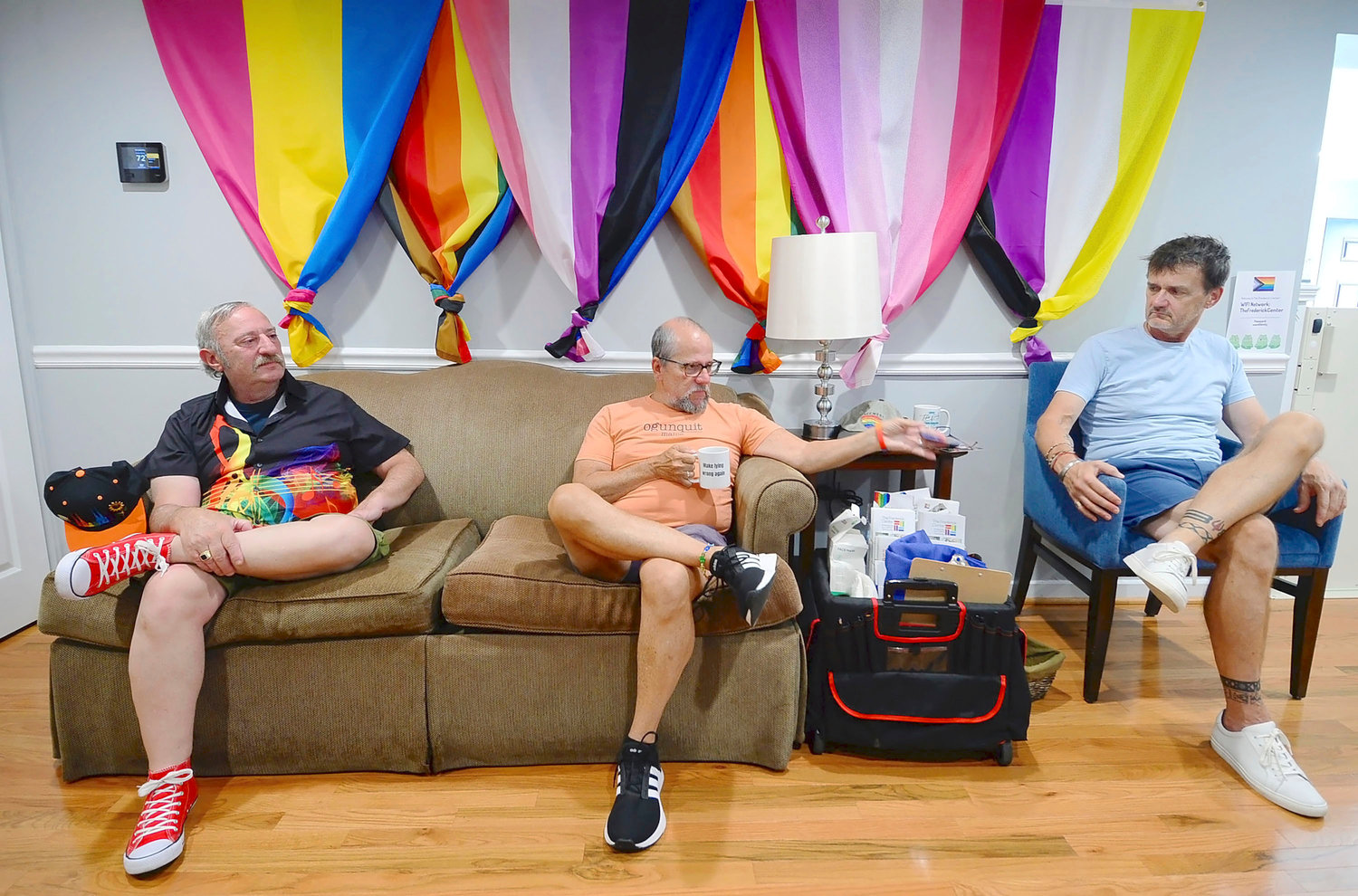 FREDERICK, Md. — There aren’t any formal age restrictions for who is and isn’t allowed to join The Frederick Center’s Aging With Pride support group.

Instead, Steve Gibson said, participants tend to be “self-selecting.”

“If you’re willing to admit you’re old, you can come,” joked Gibson, who, at 63, is teased about being the baby of the group.

The time Aging With Pride meets each week — 9 to 11 a.m. on Wednesdays, when kids are in school and adults are often at work — also plays a role in its membership. Most of the group’s regulars are retired.

Programming geared toward queer retired folks is a relatively recent development at The Frederick Center. Many of the support groups at the nonprofit, which serves Frederick County’s LGBTQ community, are for young people and their families. But soon after Aging With Pride started meeting in May, it became clear that its members had been waiting for such a support group for a long time. By the second or third meeting, members were wanting to meet more frequently than every other week.

“That was the thing that said to me, ‘OK, this is serious,’” said Stuart Harvey, a regular at the group’s now weekly coffee hours. “In other words, we’ve got things to share, we’ve got things we need to learn.”

Members expect the fledgling group to grow over time. About half a dozen people currently attend each meeting, and there are about 15 on the group’s email list.

Harvey said he hopes the group’s membership will expand to include more women and people of color. Now, it’s primarily white and — besides Randi Wallace, a regular at the group — is mostly men.

He and other participants also see Aging With Pride eventually moving beyond the walls of The Frederick Center’s cozy living room, where it currently meets.

Down the road, Harvey said he’d like to organize a trip to New York with other group members to see a Broadway show. Another participant, Jack Day, has been thinking about inviting people to catch a 10 a.m. show with him at Warehouse Cinemas.

Future plans aside, the companionship the group provides has already meant a great deal to its members.

When five of them gathered at The Frederick Center on a recent afternoon to talk about Aging With Pride with Prime Time, their delight was palpable. Together, they cracked jokes and often talked over one another in excitement.

Even though the support group is only three months old, Bruce Propst said it has already made a big difference in his life.

Twelve years ago, when his relationship of nearly three decades came to an end, he was “thrown into a new world” where he was mostly on his own. He’s been lonely during the pandemic, without a partner or husband. “This group is very important to me,” he said. “It’s a connection to who I am and who’s out there.”

The first hour of the group meeting is usually devoted to a presentation from a guest speaker. Members recently hosted Kathy Schey, director of Frederick County’s Senior Services Division, and hope to welcome experts who can give advice on wealth management, health care and other topics at future meetings.

Participants typically spend the last hour of the meeting chatting. They’ll talk Maryland politics, share stories from recent trips they’ve been on and catch up.

But often, more serious topics come up. Many members worry about finding an LGBTQ-friendly retirement community or assisted living facility, for instance. Some are married and wonder if they’ll be able to find a place where they feel comfortable being openly affectionate with their partners, a luxury many straight couples take for granted.

And after the U.S. Supreme Court struck down Roe v. Wade, some participants are fearful about what constitutional protections will be taken away next. In an opinion concurring with the court’s decision to revoke the federal right to abortion, Justice Clarence Thomas argued the body should also reconsider its past rulings on gay marriage and intimate relations between same-sex partners.

“We are now threatened,” Day said.

Propst nodded. “Our future’s in jeopardy,” he said.

In the fall, Harvey said, the group hopes to host representatives from the LGBTQ legal advocacy group FreeState Justice at a meeting to talk about what future court rulings could mean for queer people in Maryland.

Before Day joined Aging With Pride, he didn’t know any other retired gay people.

“Where do we meet people? The grocery store?” he said. “Especially with retired people, you can’t tell. You know, ‘Hey, I’m gay, are you?’”

The group broke out in chuckles.

Wallace, a transgender woman, remembers what it was like to find a community of other trans people shortly after she came out in 2005. It was so welcoming. And — since it was in Harrisburg, Pennsylvania — it gave her the anonymity to be her true self before she was ready to come out where she worked and lived in Maryland.

She retired shortly after the pandemic hit. After sitting at home for a while with her dog, she joined Frederick’s Evangelical Reformed United Church of Christ.

“Then this came along,” she said of Aging With Pride. “I thought, ‘OK, this looks interesting.’ And now, I’m throwing myself into this little group.”

Members said it’s been important for them to have a group specifically for people in their age cohort.

It’s not like they have anything against young queer people, Gibson said. He loves being around them but also recognizes they’ve had very different life experiences. They didn’t watch their friends die during the AIDS epidemic. Many don’t know what it’s like to be closeted or to come out while married to a member of the opposite gender — “which is why I was interested in joining this group,” Gibson said. “I wanted people that, when I talk about Cher, understand who I’m talking about. When I talk about what I have lived through, they can understand.”

Eventually, Day said he thinks the group will become a sort of natural role model for other groups at The Frederick Center.

Its members can show people, “Oh! You can grow old, and it’s not really that horrible,” he said.

“Most days,” Propst cut in, making the room break out into laughter. “Most days, honey. Most days.”