In the aftermath of a mass shooting on a New York City subway train, the mayor floated a high-tech idea: deploy scanners that can spot someone carrying a gun into the transit … 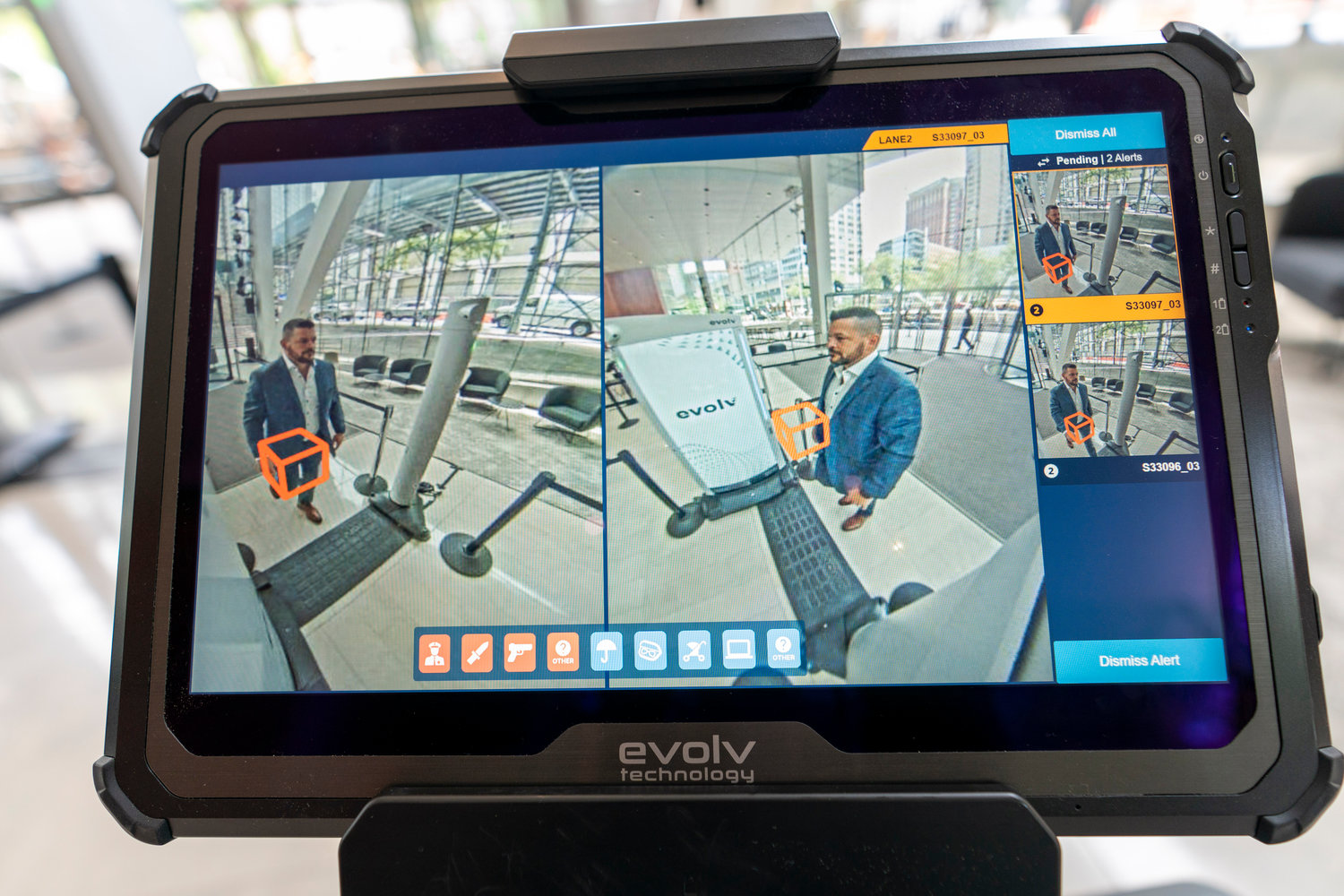 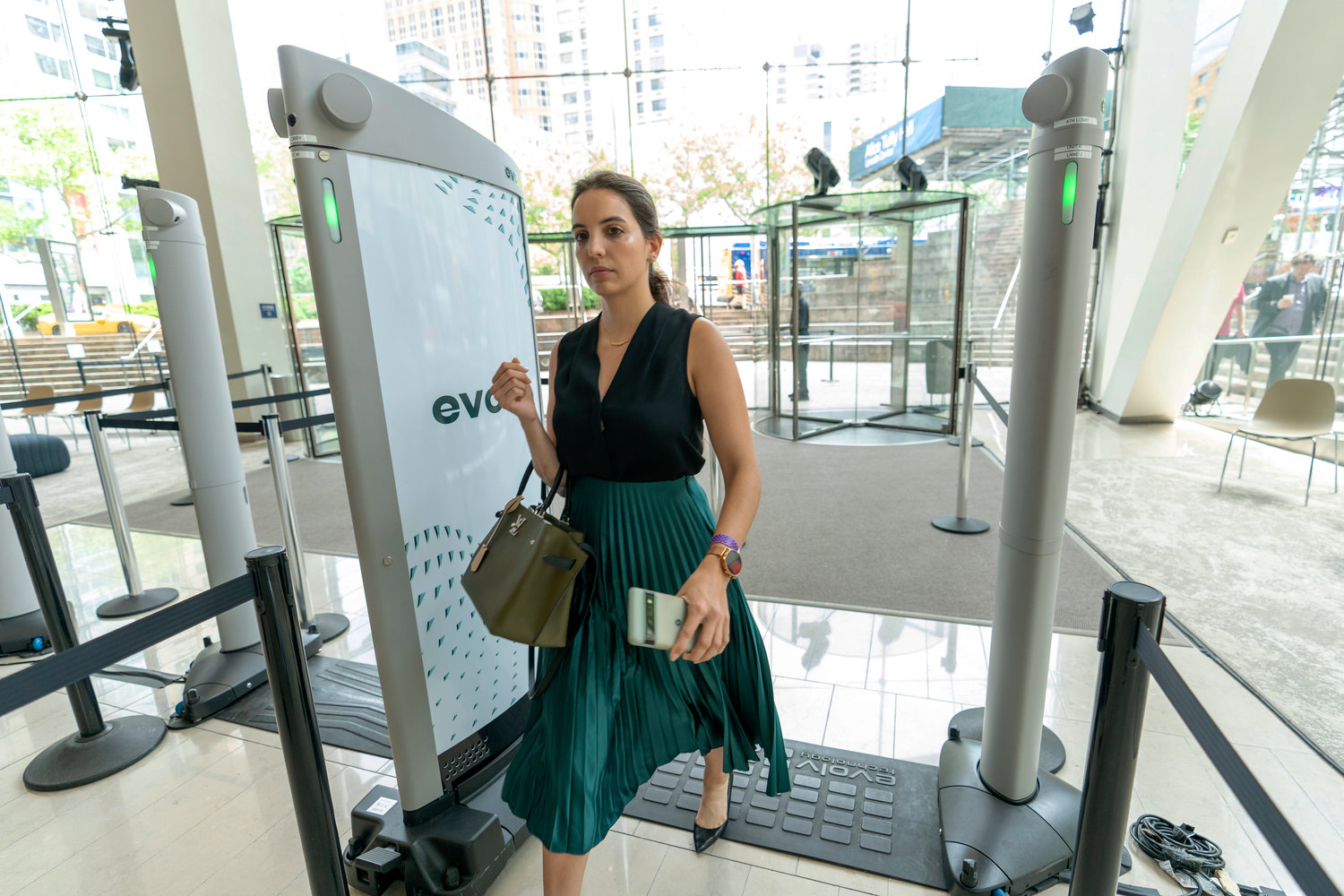 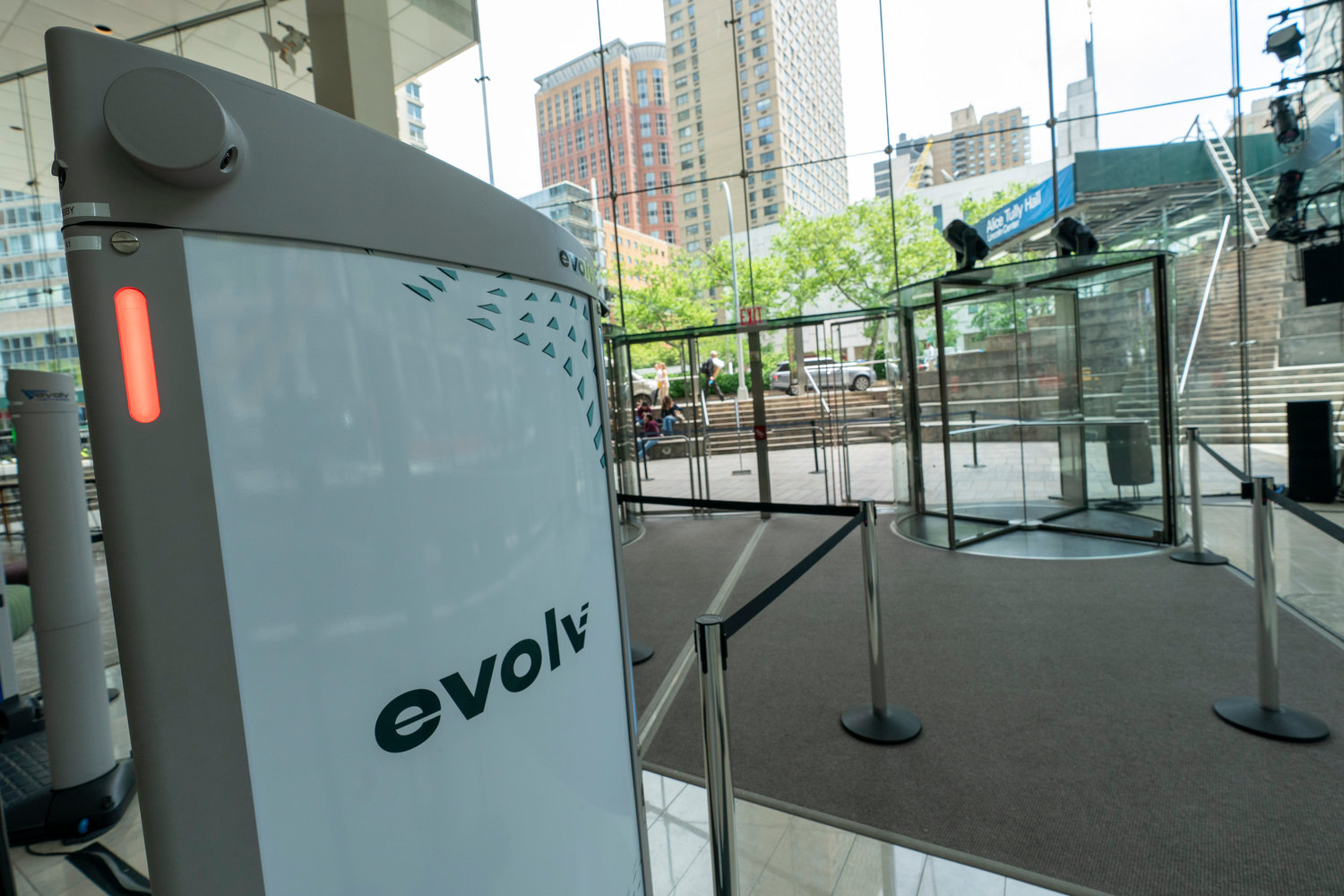 The Evolv Express weapons detection system lights up red as it flags a weapon that Dominck D'Orazio, Evolv Technology account executive, wears on his hip while demonstrating the system, Wednesday, May 25, 2022, in New York. (AP Photo/Mary Altaffer)
(AP Photo) 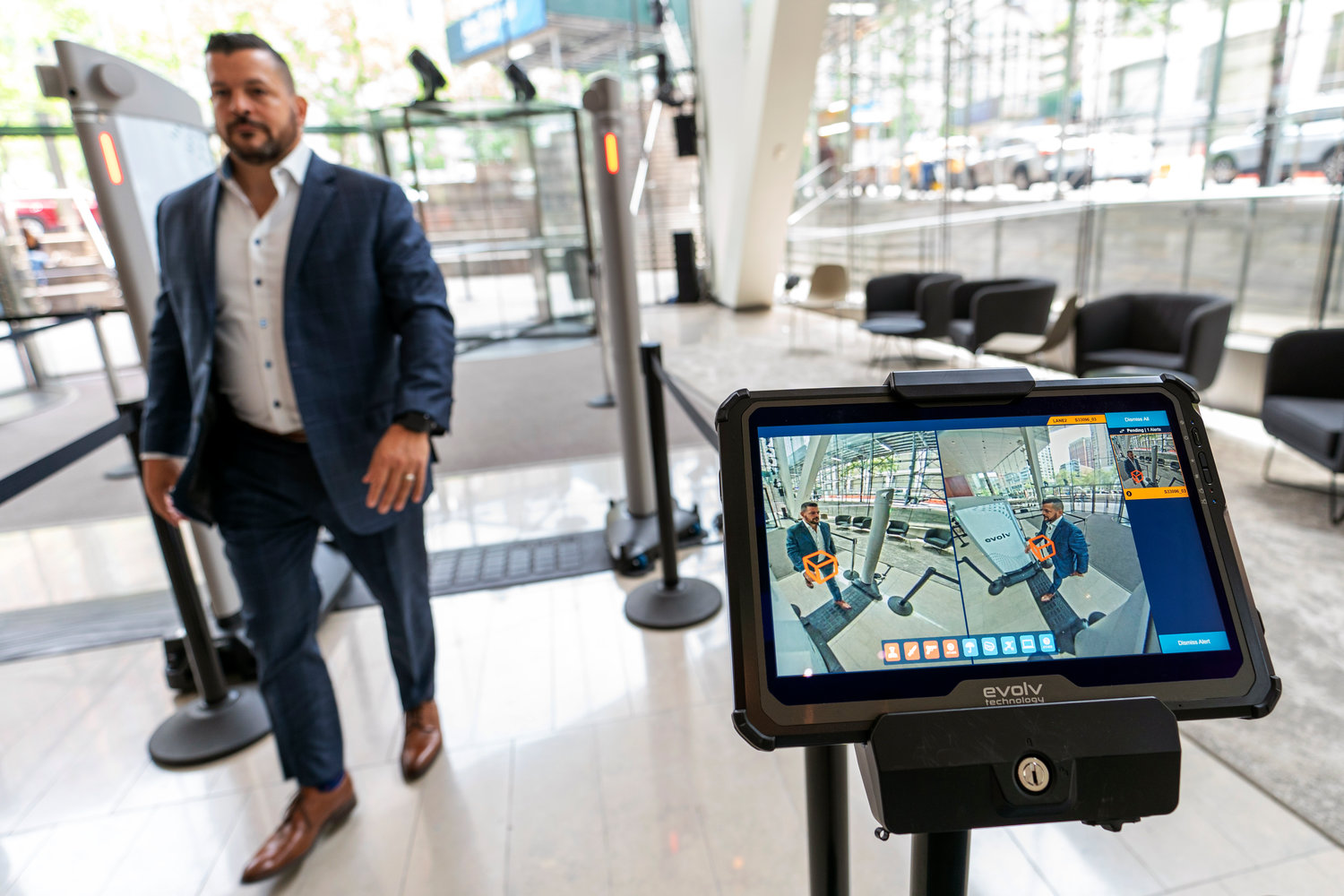 Dominck D'Orazio, account executive for Evolv Technology, demonstrates the Evolv Express weapons detection system, which is showing red lights to flag a weapon he is wearing on his hip, Wednesday, May 25, 2022, in New York. (AP Photo/Mary Altaffer)
(AP Photo) 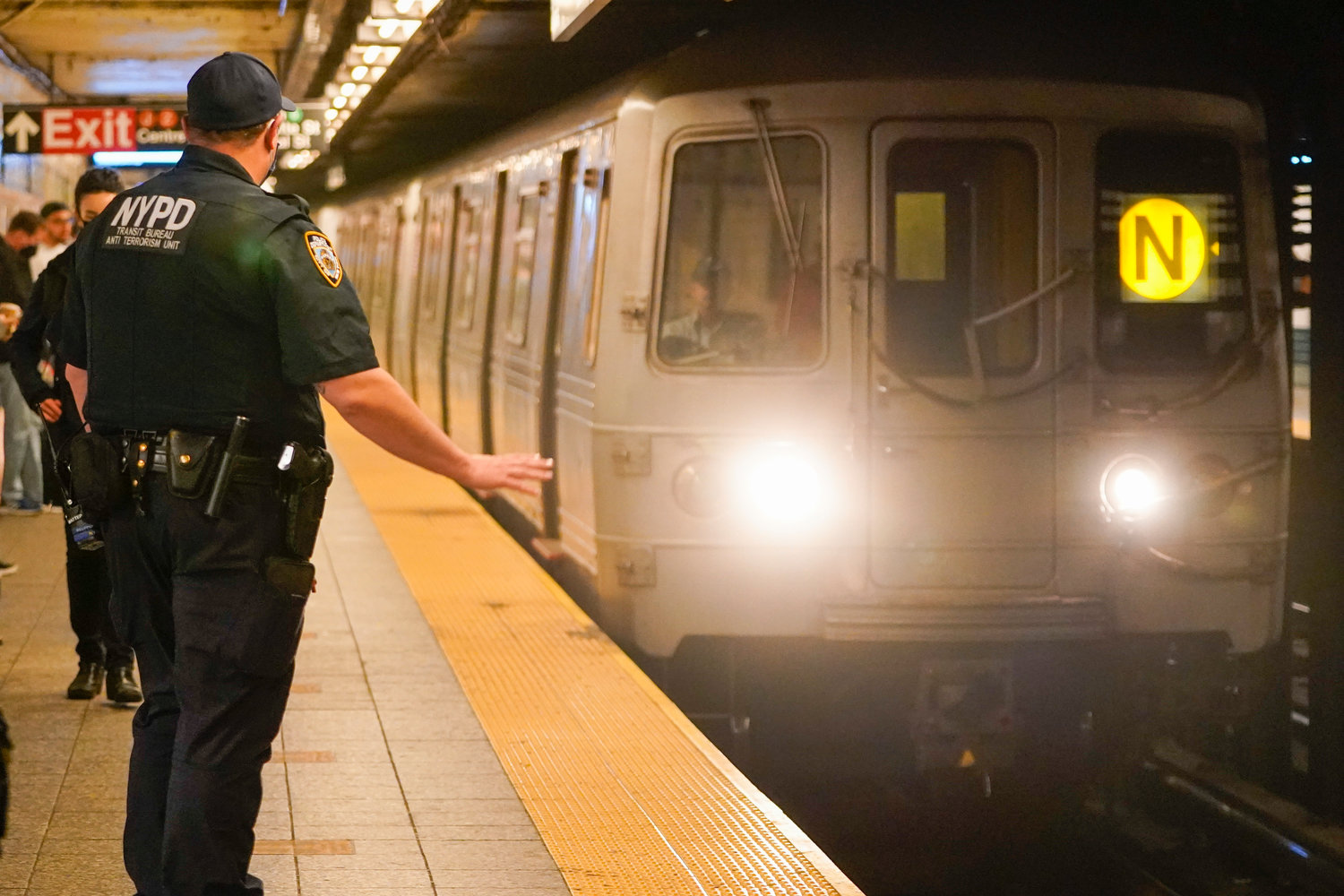 A New York Police Officers with the Transit Bureau Anti Terrorism Unit gestures to the train conducted as a train enters the Canal St. Q and N station, Tuesday, May 24, 2022, in New York. Andrew Abdullah, the man wanted in an apparently unprovoked fatal shooting aboard a New York City subway train was taken into custody by police on Tuesday, hours after authorities posted his name and photo on social media and implored the public to help find him. (AP Photo/Mary Altaffer)
(AP Photo)
Previous Next
Posted Wednesday, June 1, 2022 1:55 pm
David Porter, Associated Press

NEW YORK CITY (AP) — In the aftermath of a mass shooting on a New York City subway train, the mayor floated a high-tech idea: deploy scanners that can spot someone carrying a gun into the transit system before they have a chance to use it.

The technology to scan large numbers of people quickly for weapons does exist, and is used now to screen people at places like sports stadiums and theme parks.

But security experts say installing such a system in the city’s sprawling, porous subway system in a way that would make a difference would be difficult, if not impossible.

The problem wouldn’t necessarily be the technology — but rather the reality that scanners need to be accompanied by human operators to confront people carrying firearms illegally.

“Logistically, it would be a nightmare. You’re going to have to tie up a lot of officers doing this,” said James Dooley, a retired New York Police Department captain who served in the department’s transit division. “We have hundreds of stations, and the fact of the matter is that putting someone at every entrance to every station is logistically impossible.”

Mayor Eric Adams, a former police captain, has acknowledged the challenges but has said the system might still be worth trying at select locations as a deterrent.

“We want to be able to just pop up at a station someplace so people don’t know it’s there,” the Democrat said, “similar to what we do when we do car checkpoints.”

The push for better subway security got renewed urgency in April after a gunman set off smoke bombs and sprayed a subway compartment with shots, wounding 10 people.

Then, on May 22, another gunman killed a passenger in what authorities said appeared to be a random attack.

A day after that killing, Adams again expressed interest in weapon-screening technology. And soon, mass shootings in Buffalo, New York, and Uvalde, Texas, intensified the debate over how to address gun violence.

In the New York City subway, the screening wouldn’t resemble airport checkpoints, an untenable solution for a system with 472 stations, all with multiple entrances. Instead, Adams referenced a technology that uses sensors to detect metal but also can determine the shape of an object, such as a gun, while people pass by uninterrupted.

Evolv, a Boston-area company, uses the technology at facilities including pro sports stadiums in Atlanta and Nashville, the Georgia Aquarium in Atlanta and, in a recent test, at New York’s Lincoln Center for the Performing Arts, though not in any mass transit systems.

The screeners can scan 3,600 people per hour, according to the company. They also can produce false positives from items such as Chromebooks, though.

“Any technology is only one piece of the solution which includes the security professionals, the operational environment, and the protocols they follow,” Loof said.

Similar screening devices made by Thruvision, an England-based company, were part of a pilot program in the Los Angeles mass transit system in 2018 and currently are used when threat levels are elevated, said Los Angeles Metro spokesperson Dave Sotero. The machines project scanning waves at passersby from a distance.

Identifying someone with a weapon is only half the challenge.

Adams has not publicly discussed how much the machines, and operating them, could cost New York City, but Harvin acknowledged the price could be steep.

“If you have a determined assailant, you’re not going to just have a security guard there; you’ll have to have a police officer,” Harvin said. “It’s tough. You can harden every station, but who’s going to want to pay a $10 fare? Because the cost is going to be passed on to the rider.”

Still, because you can’t put cops on every car and in every station, Harvin said, “you have to invest in some technology.”

“It’s very complex, but people have to get together and talk about this, because what’s being done now isn’t cutting it.”

Violent attacks in New York City’s subway system remain relatively rare compared with crime above ground. And the city overall is one of the nation’s safest large cities.

But the COVID-19 pandemic has wreaked havoc on people’s sense of safety, as has a string of high-profile crimes, including the fatal push of a woman in front of a train by a man later ruled too mentally ill to stand trial. In response, the MTA said it would test safety barriers at some stations.

The number of transit system crimes reported by the NYPD so far this year has been on par with years before the pandemic, but public perception has been that there is new unruliness underground.

The Metropolitan Transportation Authority has succeeded in getting 1,000 more police officers assigned to the system, but its chair, Janno Lieber, was candid last week when asked about the current climate.

“This week is a terrible week,” he said, referring to the May 22 shooting. “This week I cannot say to any New York City subway rider, ‘Don’t feel afraid,’ because what happened is a terrifying nightmare.”

Any workable security upgrade would probably have to encompass a combination of measures, experts said.

Dooley envisioned a limited rollout of officers using handheld metal detectors at high-traffic stations but acknowledged that would cover only a fraction of the system’s vast territory and could lead to civil liberties complaints, including the potential for racial profiling.

Police officers already do spot checks of people’s bags at some subway entrances, but those checks are so infrequent that most people ride for years without being subjected to a search.

Dorothy Moses Schulz, a retired police captain on the MTA’s MetroNorth rail system and a professor emerita at the John Jay College of Criminal Justice, suggested more police in the subways and a sustained commitment to addressing homelessness could help “send a message that we’re trying to make this an orderly system, which would bring back people.”

“If more people feel the system is working, they will come back, and when more come back, that makes the system safer,” she said.

Lieber said last week that the agency is open to new approaches.

“We are serious about exploring every one of these technologies,” he said. “I think we will get there, but it’s a question of time and technology development.”