As temperatures continue to drop and the winter months approach, some of the city’s homeless will find themselves in a deadly situation. 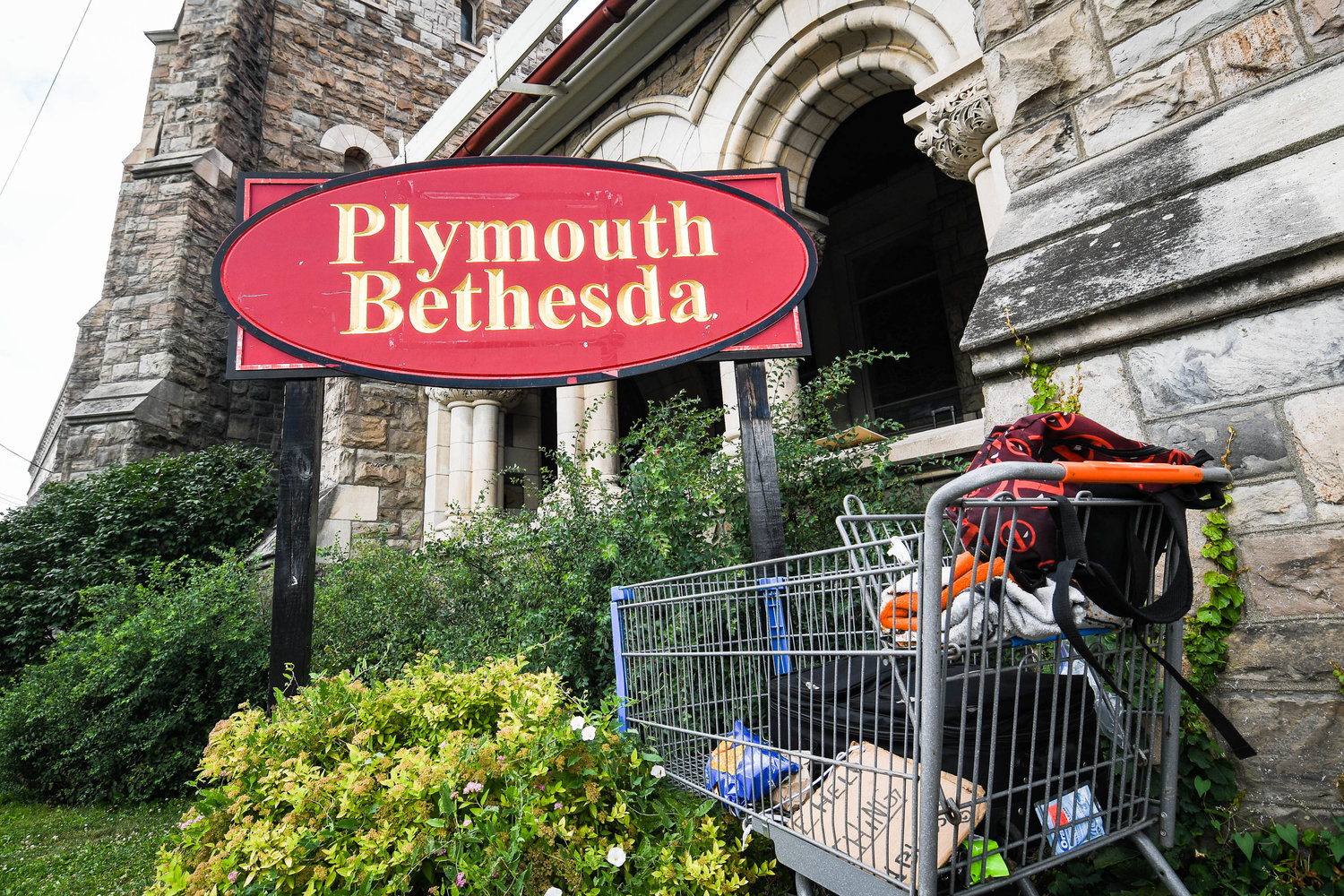 A shopping cart is left in front of Cornerstone Plymouth Bethesda Church in Utica. The church helps aid the homeless community as much as possible.
(Sentinel photo by Alex Cooper)
Posted Saturday, November 5, 2022 7:40 am
Thomas Caputo
Staff writer
email

UTICA — As temperatures continue to drop and the winter months approach, some of the city’s homeless will find themselves in a deadly situation.

Michael Ballman, pastor of the Cornerstone Plymouth Bethesda Church, 500 Plant St., has spearheaded efforts in aiding the city’s homeless who would otherwise be turned away from other shelters due to drug use, extreme cases of trauma, mental illnesses or developmental disabilities.

According to state figures, there are approximately 170 people each day who experience homelessness in Oneida County. Recent studies estimate that, on average, 130 people in the city of Utica are homeless and are sheltered daily. Ballman believes that number is even higher, citing around 500 people who do not have permanent, reliable housing in the area.

In previous years, the Cornerstone Plymouth Bethesda Church received funding which financially supported the church to provide shelter during inclement weather. Due to a lack of funding, the church has ceased its shelter operations, however Ballman allows the city’s homeless to utilize the church’s facilities during the day and to sleep outside on the church’s property at night.

With winter approaching, Ballman has become concerned with what the city’s homeless will inevitably deal with: freezing temperatures, hypothermia and even possible death. Frustrated with the lack of support from local government officials, Ballman said he established a tent city at a church-owned community garden approximately one block away.

“No one was doing anything so we had to do something,” Ballman added. “It’s not something we wanted to do, but there were no alternatives.”

“It was a desperate, last ditch effort to do something to keep them safe in a place where they can be easily found to receive services and have some semblance of security in numbers,” Ballman said.

On Oct. 27, the Oneida County Health Department shut down the tent city, citing a violation of the state sanitary code and deeming it a serious hazard with conditions that were detrimental to public health.

“There were eight people we had encountered when we closed it down,” said Oneida County Executive Anthony Picente. “Five were placed in temporary shelters by the county. Two refused altogether, which they have that right to do and they did ... one individual has an apartment paid for through public assistance so why he was living there, you can only make various assumptions.”

“The connotations that the county is not doing enough for homeless is not acceptable and not true,” Picente added. “We deal with it every day and place hundreds of people in shelters and then work with them to provide assistance.”

Once winter approaches, Ballman said the city’s homeless that cannot take refuge at a shelter are going to be living in abandoned buildings, getting kicked out of stairwells of low-income housing or even living in the woods. Ballman believes this method of insecure housing during inclement weather will lead to suffering and dying from inaction to address the most important need for the city’s homeless: housing.

Ballman said he has continuously reached out to local government officials in order to seek a remedy to the ongoing problems the city’s homeless face. After speaking with Utica Mayor Robert Palmieri, Ballman is hopeful to see some progress ahead.

“I think the mayor realizes that whatever we’re doing isn’t working and that there is this group of people that are not getting helped,” Ballman said. “I think he’s also realized that we have to do more long-term and more modern best practices, rather than just rely on the old standards that we’ve been doing that aren’t working.”

Ballman has also been in touch with Picente, offering his suggestions and hoping the county will be able to better address Utica’s homelessness crisis in a more holistic manner.

COLLECTION: The regional challenges of housing and homelessness