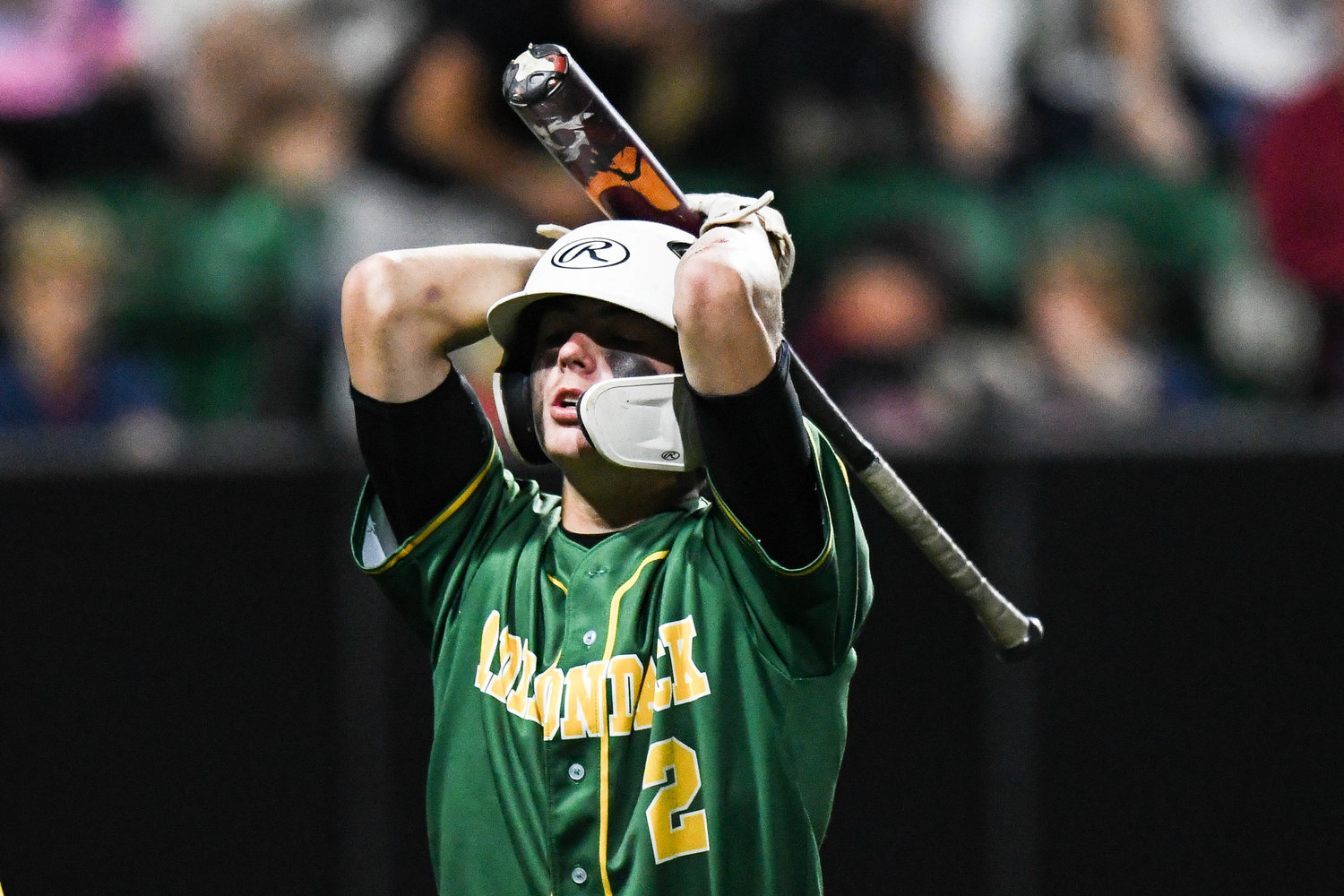 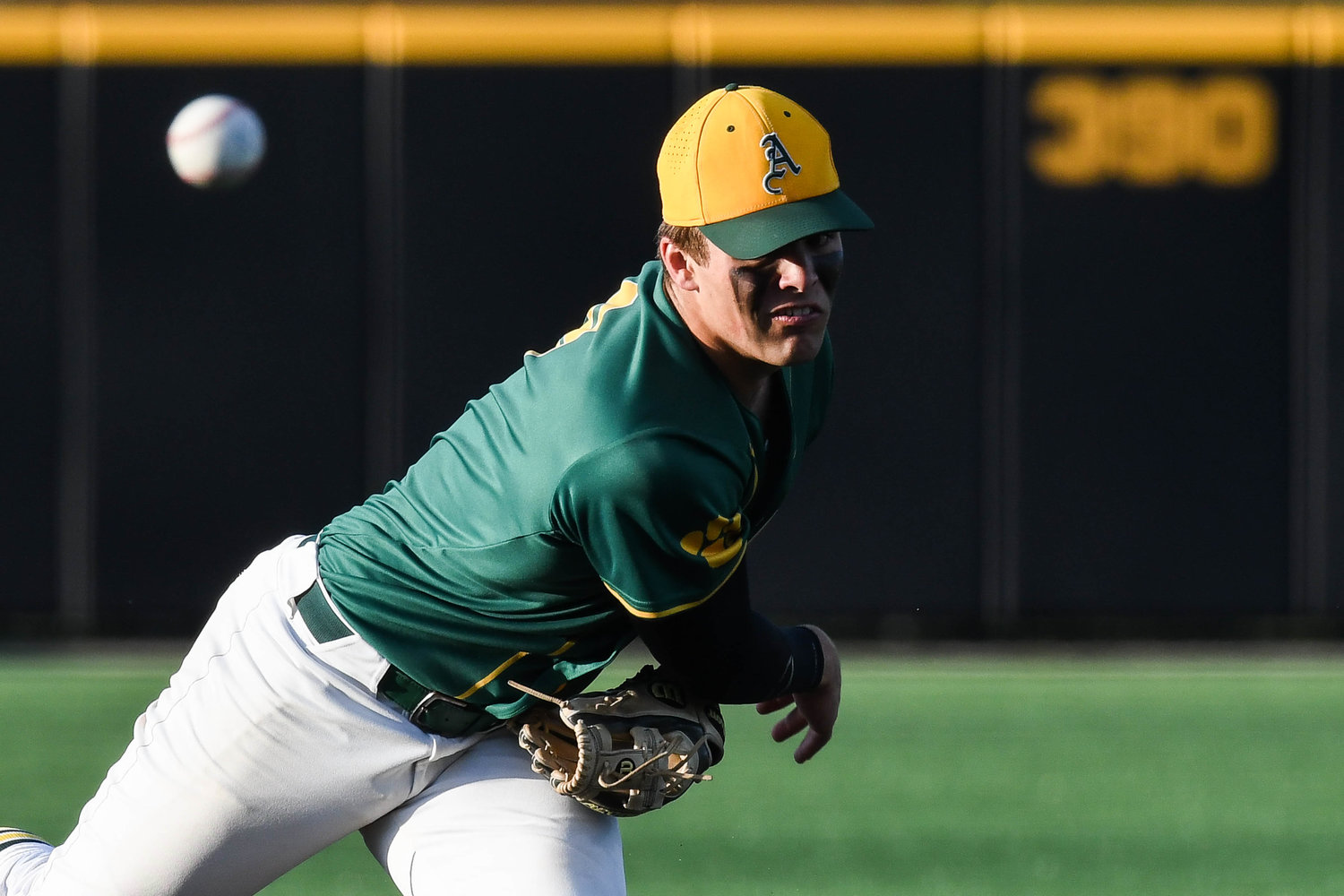 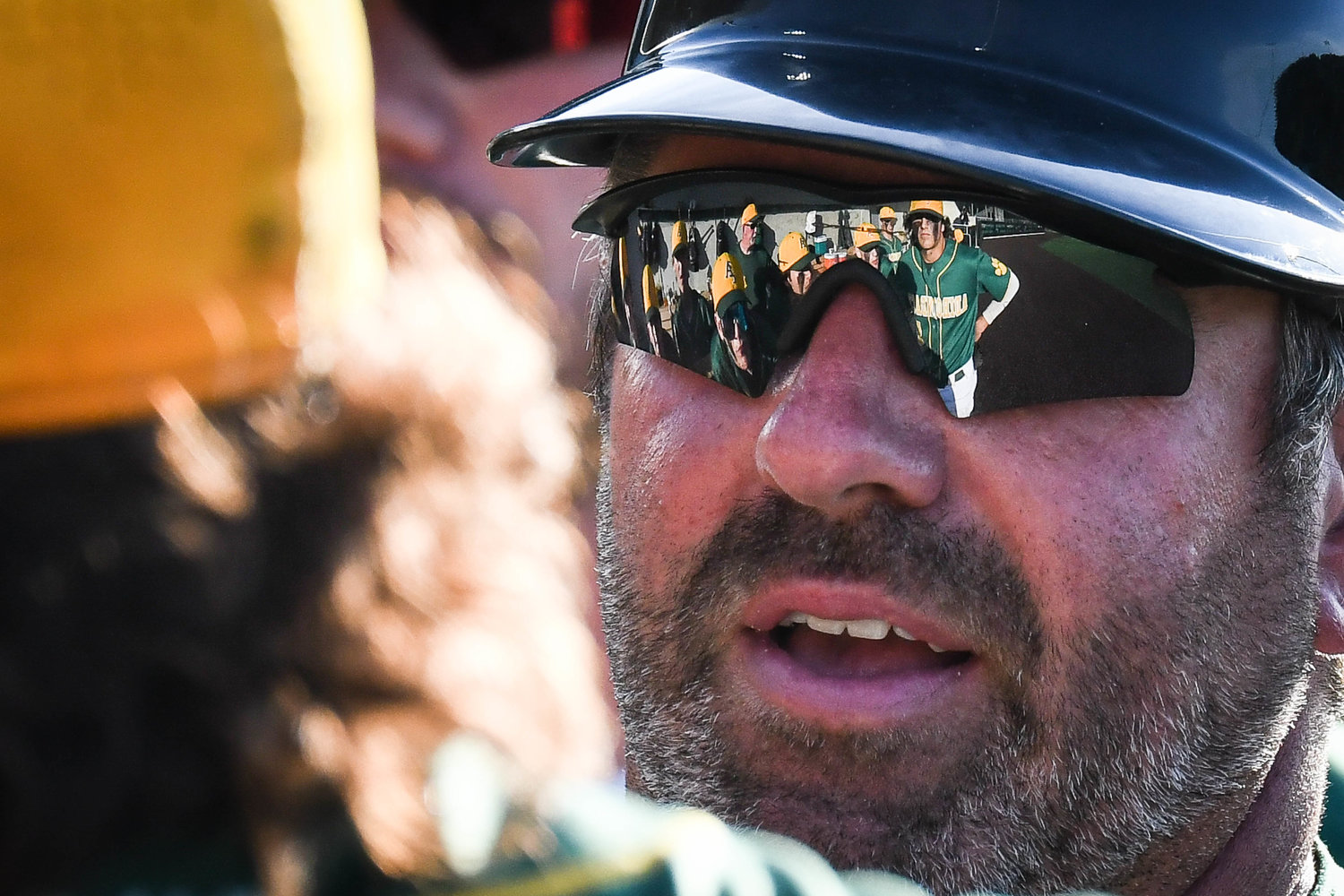 Adirondack head coach Philip Puleo talks with players before the start of the state Class C semifinal game against Chatham on Friday at Binghamton University.
(Sentinel photo by Alex Cooper) 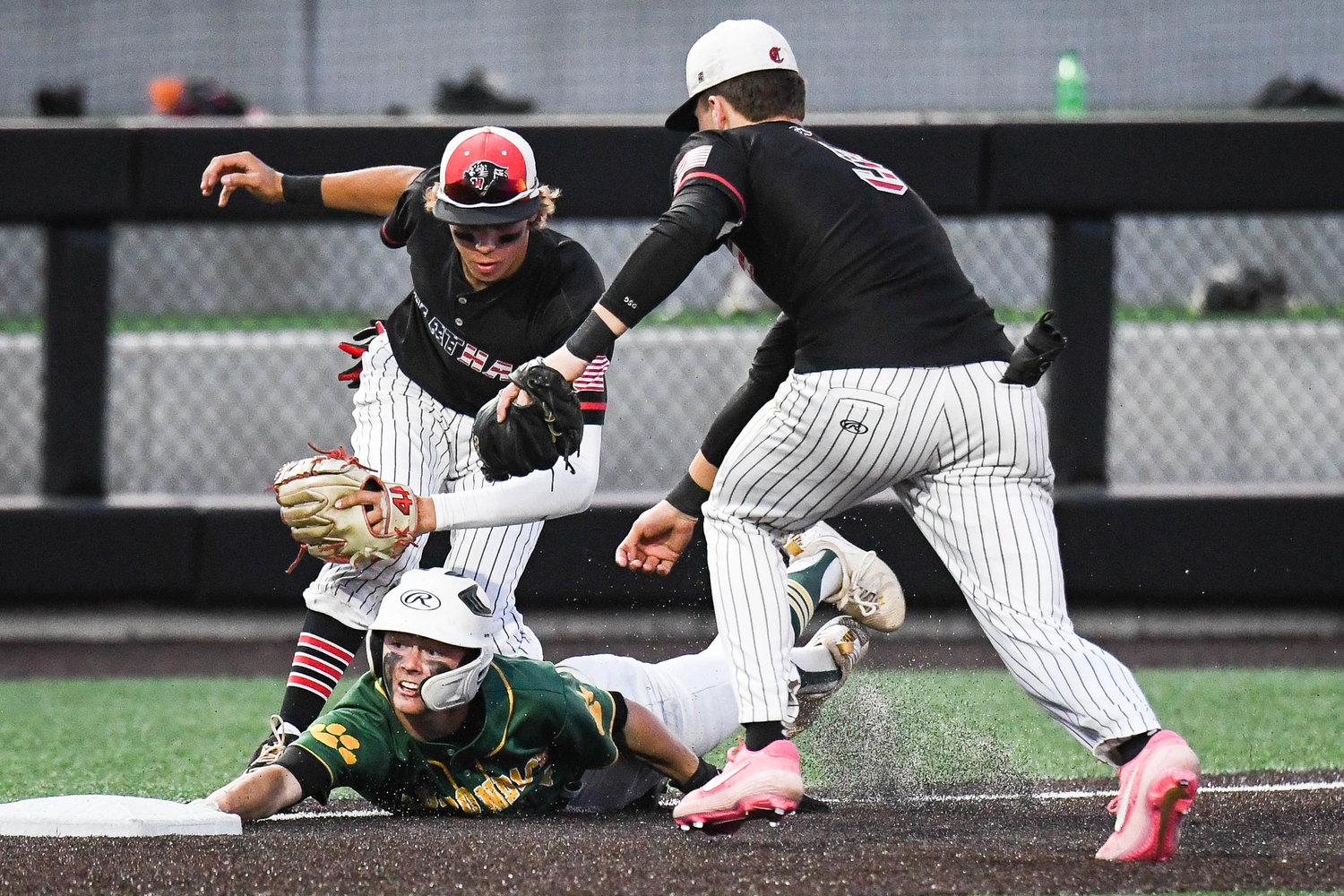 Adirondack player Kreedon Rogers (2) successfully avoids a tag at third base during the state Class C semifinal game against Chatham on Friday at Binghamton University.
(Sentinel photo by Alex Cooper) 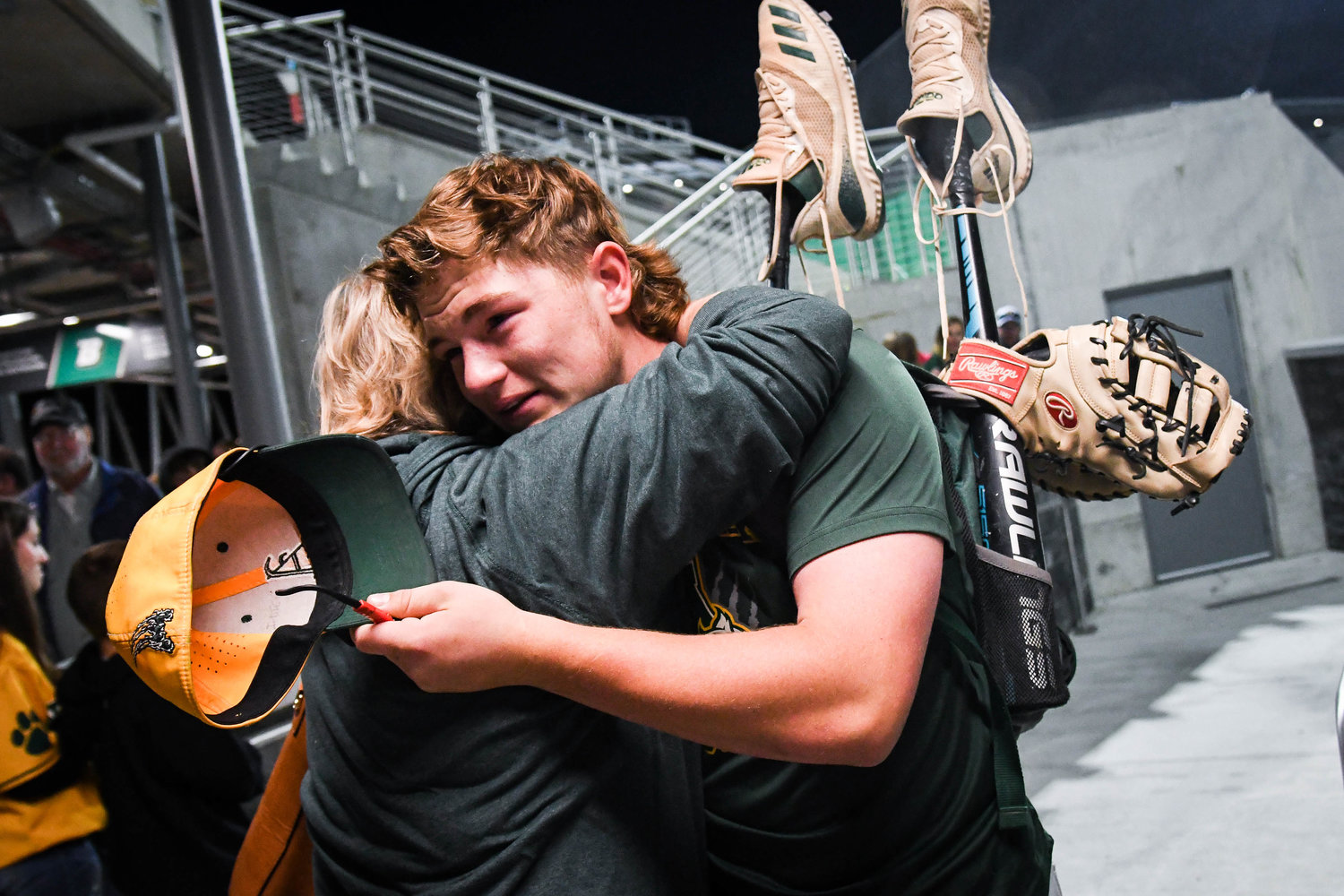 VESTAL — The magic has run out for the Adirondack baseball team.

Standout pitcher Tyler Kneller kept the Wildcats guessing, Chatham got a late grand slam and Adirondack couldn’t overcome a few of its own miscues in a 5-0 loss in the New York state Class C semifinal game at Binghamton University’s baseball complex.

The loss ends Adirondack’s impressive season at 13-12 overall. The postseason run came after a 0-5 start to the season before rolling through the Section III tournament as the 11th seed and topping Class C power Westmoreland to gain momentum.

“It was a great experience,” said White, who admitted there was some nervousness before Friday’s game as Adirondack was trying to reach the state finals for the first time since 1986. “We just couldn’t finish it.”

For his part Friday, White allowed three hits – he didn’t give up one until fourth inning – and struck out five in seven innings. He issued four walks.

The biggest blemish came in the seventh when Tate Van Alstyne sent a blast on a full count with two outs to deep left-center field for a grand slam that helped Albany-area Chatham (26-1 overall) advance to the championship game Saturday.

“It was a point where I had to throw it down the middle,” White said. “We had them until the last inning. It was a close game. They just capitalized.”

Adirondack coach Phil Puleo said that White helped keep the team in it.

“He’s been our guy. We left it in his hands,” Puleo said. “He has nothing to hang his head about.”

Kneller – who combined to throw a no-hitter for Chatham in state regionals – finished with 15 strikeouts. That includes setting down eight of the last nine Adirondack batters on his own in the complete-game win. Despite allowing six walks, he scatted two hits.

Adirondack also struggled when it had opportunities, stranding a total of nine batters on base. That includes a bases loaded opportunity in the fourth inning while trailing 1-0.

The Wildcats also put their bodies on the line in the field. Junior Gabe Chiocki made two huge catches – including one in which he crashed heavily into the outfield wall in the fifth inning. He came out of the game and Puleo said he had a shoulder injury.

“I told them when you’re in tears after the game, that means you left it out there,” Puleo said. “We had our left fielder literally run into a wall.”

Adirondack struggled offensively, though. The Wildcats threatened in the second after Jacob Khouri and Bailey Gleasman drew walks to open the inning. However, Kneller got back-to-back strikeouts.

Adirondack attempted a squeeze with Khouri hustling to home plate, but Chris Strobel was thrown out at first.

After Chatham manufactured a run in the fourth when Matthew Thorsen – who singled and then eventually got third on errors on two pickoff attempts – scored on a ground.

Khouri led off the bottom of the fourth with a triple, which ended a stretch of 17 consecutive innings without Chatham allowing a hit. With one out, Issac Croneiser walked and Strobel also earned a walk with two outs.

With the bases loaded, Kneller got a strikeout to end the Wildcats’ threat.

“We struck out too much,” Puleo said. “(Kneller) threw well. He kept us off balance. I have to tip my hat to him.”

Adirondack has belief they can return to this spot. The program will lose just three seniors. Standouts likeWhite, Brett Sanford and Chiocki are juniors along with a slew of sophomores, so Adirondack should have a realistic shot.