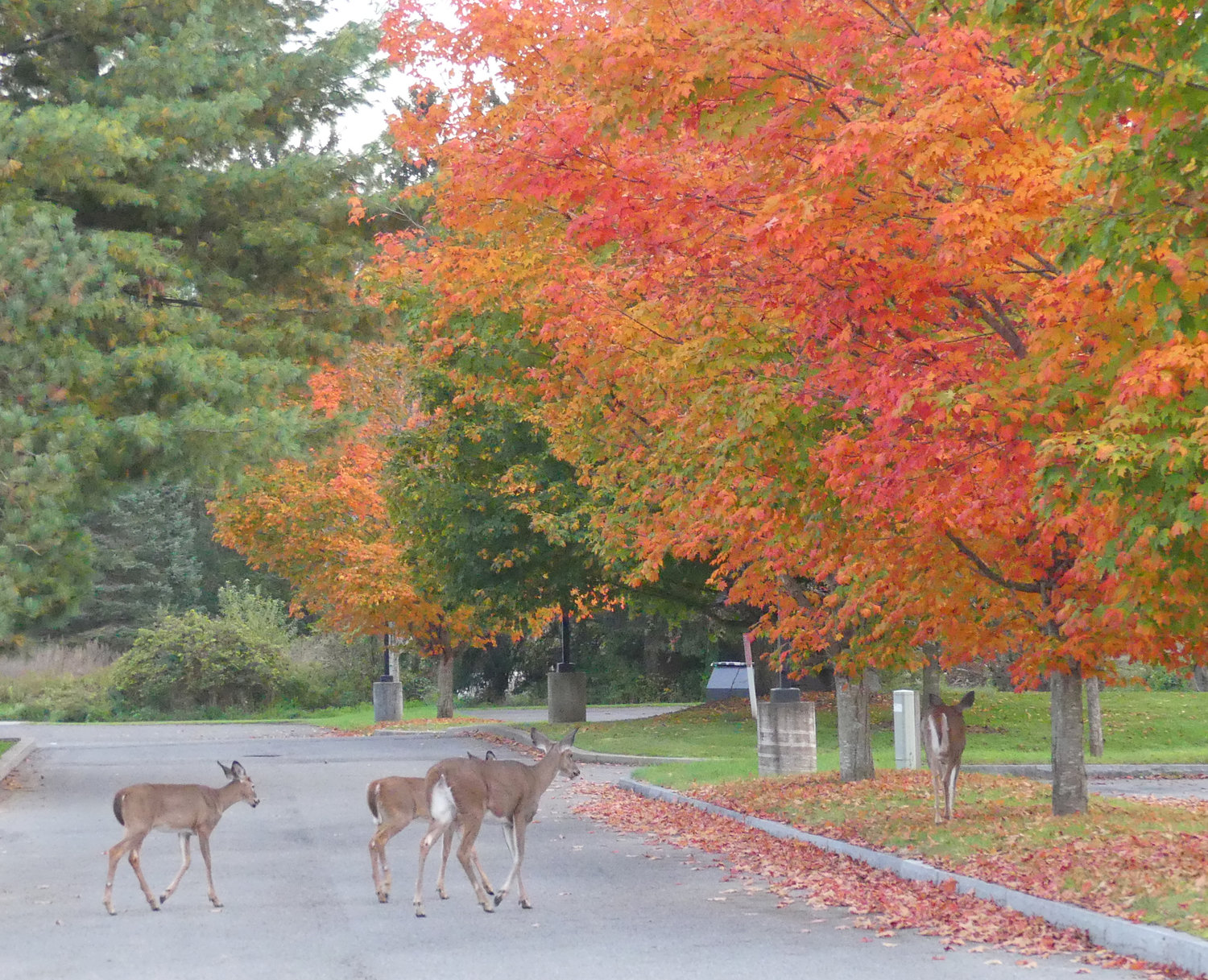 BEWARE OF DEER — In this file photo, four deer walk across the driveway near AmeriCU in Rome.
(Sentinel photo by Eileen Pierson)
Posted Monday, November 29, 2021 12:47 pm

New York State drivers need to buckle up this fall and be on the lookout for deer, as well as the increased risk of becoming drowsy behind the wheel, according to recent statements from AAA Northeast.

While animal crashes are lower in New York State, the numbers are still very high and continue to pose a serious threat to road safety, a release notes.

An analysis by AAA Northeast found 33,956 animal crashes statewide in 2020, a nearly seven percent decrease from 2019. But, while the lower number is a step in the right direction and doubtlessly due to less driving during the pandemic, there were 1,538 crashes that caused injuries to drivers and/or passengers. Tragically, six involved fatalities. The data do not show the total number of injuries or deaths, just the total crashes where someone got hurt or killed.

The overwhelming majority of animal crashes involve hitting deer, with a surprising number in urban areas.

County-by-county data from 2020 show Oneida County had the fourth highest number of animal collisions in the state with 1279.

Deer crashes peak in autumn because it’s deer mating season, which means they’re on the move at dusk and dawn – just like commuters driving between work and home. It’s a recipe for potentially serious crashes, particularly because visibility decreases in the fall as each sunrise is later and sunset is sooner. The vast majority (81 percent) occurred outside daylight hours.

“Motorists need to be especially vigilant and anticipate deer darting into the roadway, especially during evening hours,” said Patti Artessa, Regional Director of Public and Government Affairs for AAA Northeast. “Deer pose dangers to themselves, to your vehicle, and to you, so it behooves everybody to be prepared and alert.”

Along with earlier sunsets, the end of daylight-saving time can also increase the risk of drowsy driving. The time change can disrupt circadian rhythms and contribute to loss of sleep. According to AAA Foundation for Traffic Safety research, losing one to two hours of sleep can double your crash risk, and an individual operating a vehicle with five hours of sleep or less in a 24-hour period faces crash risk as someone driving drunk.

Most deer-related crashes occur because drivers simply don’t see deer crossing the roadway in low-light conditions. But many crashes occur due to driver distraction or inattentiveness.

-Slow down by reducing speed in low-light conditions, which will give you more time to respond to unexpected wildlife movements.

-Scan off-road areas for deer that may dash out from the shoulder or wooded areas adjacent to the road. Also, be patient. Where there is one deer, there may be many, so don’t speed off after a deer crosses your path as there may be more nearby. If a collision is unavoidable, apply the brakes firmly and remain in your lane; swerving sharply to avoid an animal can cause an even more serious crash.

The best way to avoid a deer crash is to never drive drowsy or distracted or with excessive speed. In the event a deer crash is unavoidable, swerving is almost never a good option, especially on country roads. Going to the right could send the vehicle into a ditch, tree, or light pole. Swerving to the left could result in a lethal head-on crash.

-Do not get behind the wheel if you’re already tired. Rest first and remember that sleep is the only substitute for lack of sleep.