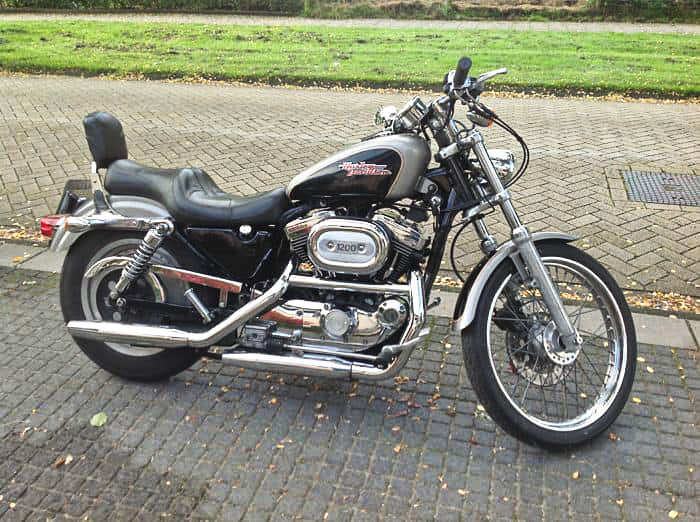 STOLEN MOTORCYCLE —This 1997 Harley Davidson Sportster motorcycle was stolen from a storage unit in the City of Sherrill sometime in the past week, according to owner Scott McKinnon. He is offering a $500 reward for information that leads to the arrest of the thief or thieves.
(Photo submitted)
Posted Wednesday, January 12, 2022 11:30 am
Sean I. Mills
Staff writer
email / twitter

CITY OF SHERRILL — A $500 reward is being offered after a 1997 Harley Davidson motorcycle was stolen out of a storage unit in Sherrill.

It is the second Harley Davidson stolen from the area in a month.

Scott McKinnon, of Sherrill, said someone broke into his storage unit on Route 5 sometime in the past week and stole his 1997 Harley Davidson 1200 Sportster. McKinnon said he got a call from the owner of the units Monday morning.

“I lifted up the door and the bike was gone,” McKinnon stated.

Nothing else was stolen from the unit, and McKinnon said he does not know if any other units were broken into. He said the motorcycle has been stored in the unit since he started renting three years ago.

“I haven’t ridden the thing in 10 years. I don’t talk about having a motorcycle,” McKinnon said. He doesn’t know how thieves found out the bike was in there, unless someone spotted it some previous time he opened the door to the unit.

Meanwhile, the Oneida Police Department reported the theft of a 1999 Harley Davidson Sportster motorcycle from a residence on Washington Avenue in Oneida on Dec. 16. That theft also remains under investigation.