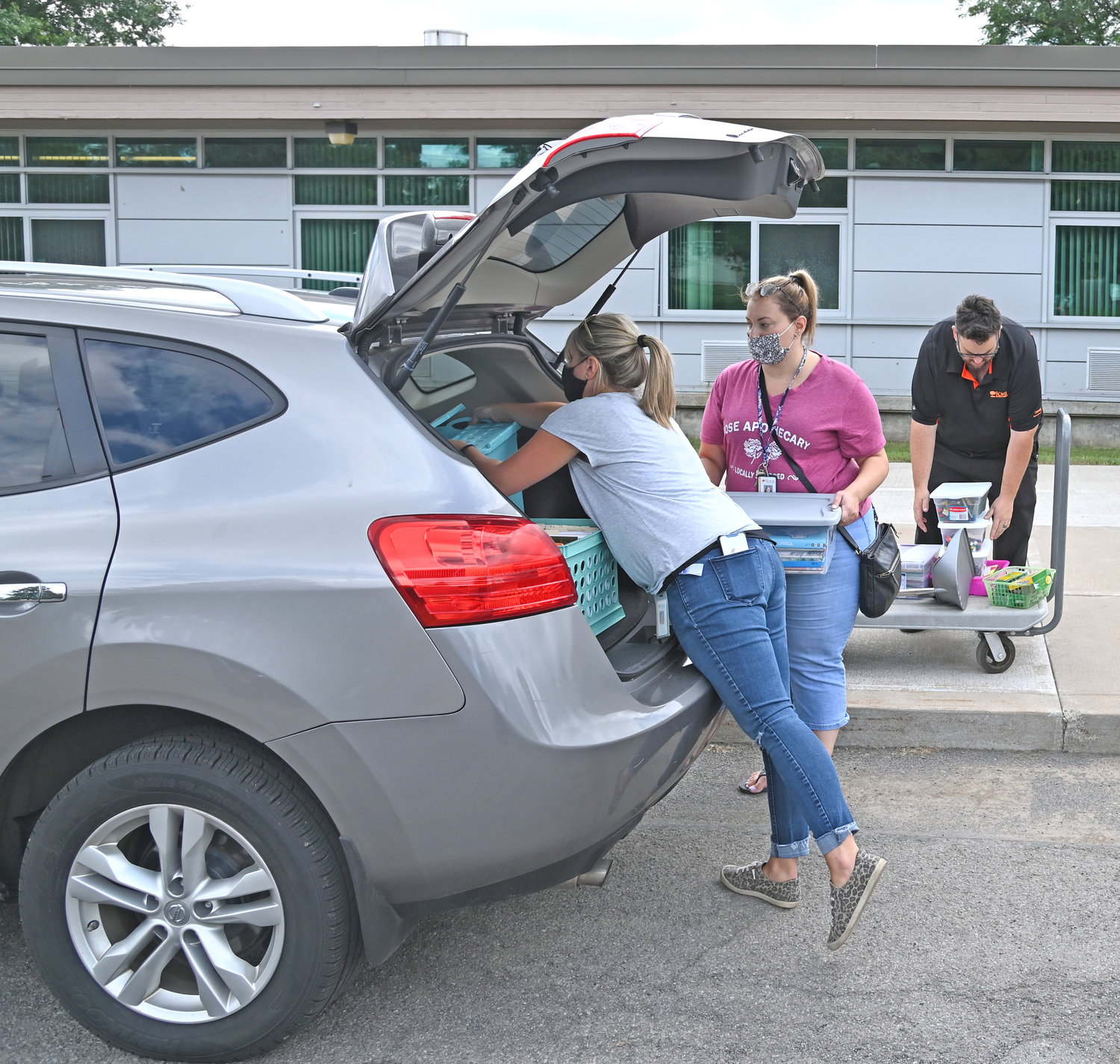 MOVING TO A NEW SCHOOL — Third grade teacher Bobbi Cook, left, and Samantha Kahler load up their cars with items from their classrooms at Staley Elementary School, 620 E. Bloomfield St., to a new room at Gansevoort Elementary School, 758 W. Liberty St. In addition to the relocation across the city, the two will go from having separate classrooms at Staley to “team teaching” in one room in their new building.
(Sentinel photo by John Clifford) 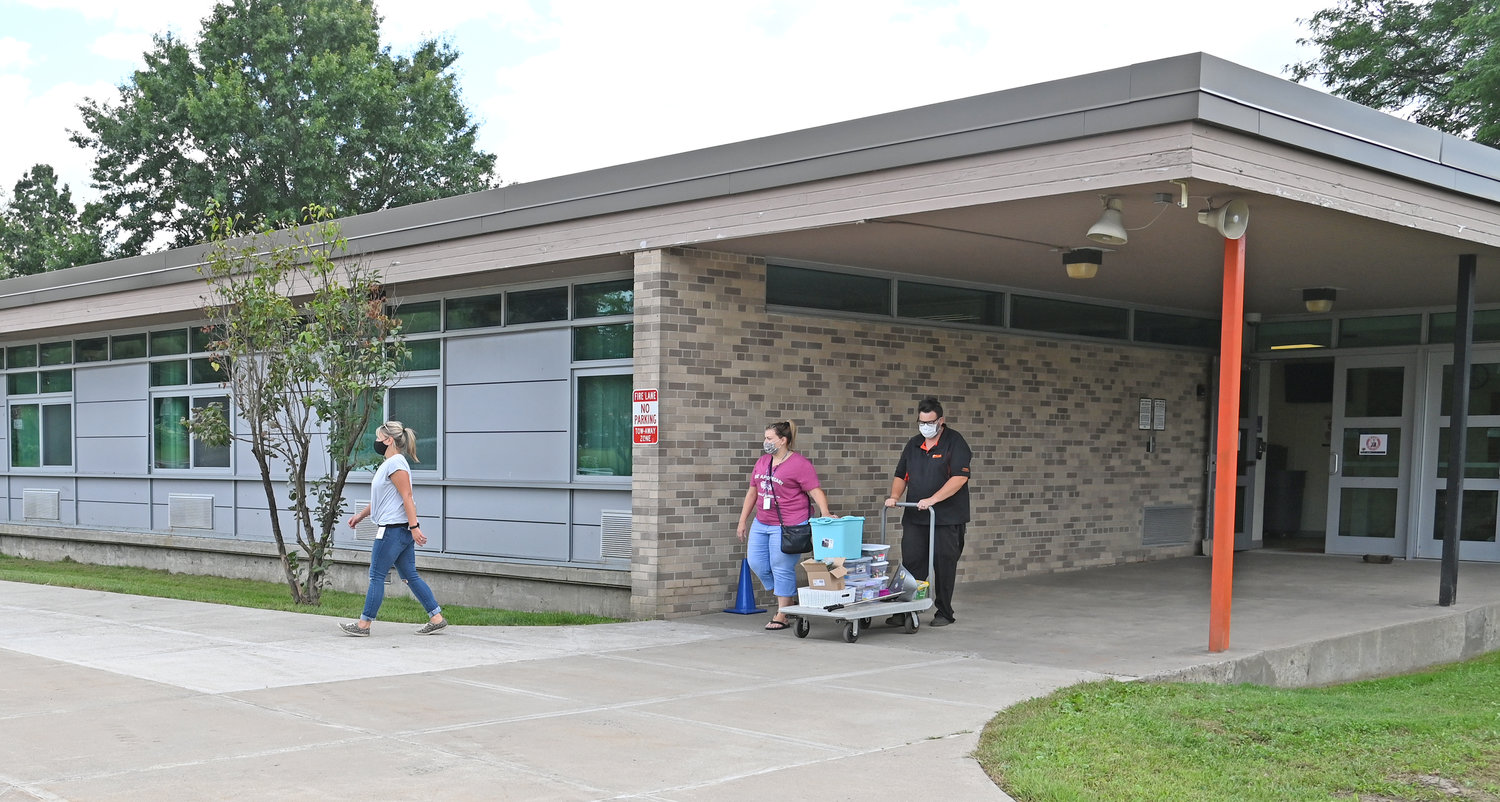 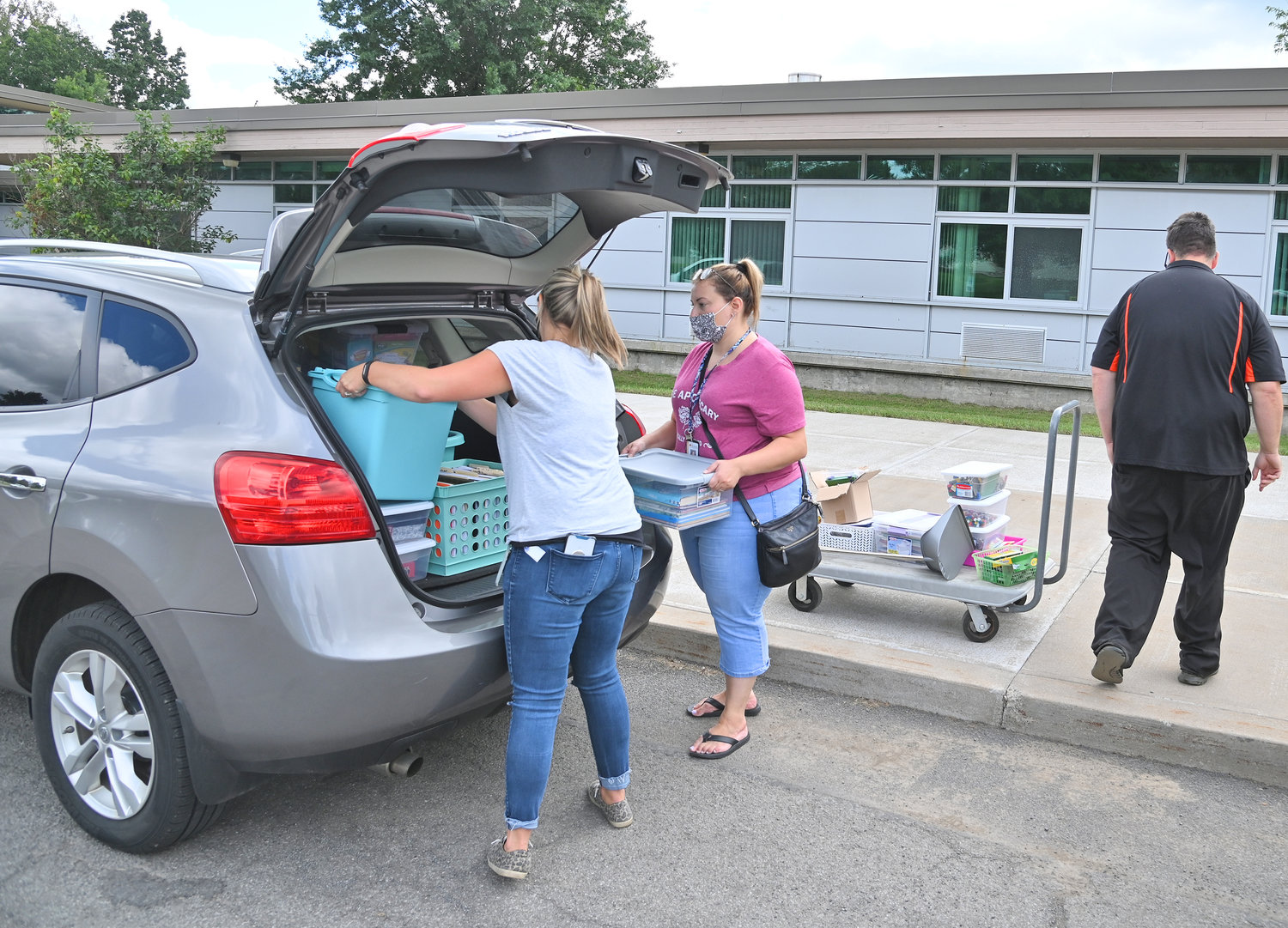 Third grade teacher Bobbi Cook (left) and Samantha Kahler load up their cars with items from their classroom at Staley Elementary where they had separate third grade classrooms and the teachers are now moving to Gansevoort Elementary where they will be going to the same room and "team teaching."
(Sentinel photo by John Clifford)
Previous Next
Posted Saturday, September 4, 2021 4:00 pm
Cara Dolan Berry
Staff writer
email

The Rome City School District Board of Education unanimously approved a resolution to affirm the damage to Staley Elementary School, 620 E. Bloomfield St., would cost more than $4.3 million to repair during a special meeting of the board on Thursday. The meeting came just days after the board in an executive session decided to close the Staley Elementary School building permanently rather than spend money to repair the school which has experienced other bouts of flooding during its nearly 60-year history.

The special meeting Thursday was to consider a single resolution regarding Staley: A resolution to consider contingent expense. The resolution referred to a report submitted by the Rome City School District Architect, LaBella Associates, detailing damage to Staley by flood waters resulting from heavy rains on Thursday, Aug. 19, and relatively detailing costs to repair that damage to restore Staley to what Superintendent Peter C. Blake referred to as “pre-flood condition.”

The “contingent expense” advanced by LaBella to so restore the 60-year-old school building — adjacent to the Mohawk River and in the waterway’s flood plain — was calculated to be $4,354,367.

The motion to consider was made by Board of Education President John Nash and seconded by board member Lisa Herbowy. Discussion ensued while, at once, the members flipped through the pages of a hand-out where LaBella summarized specific damage identified at Staley, photographs to support that, and the recommended repairs required to repair that damage, together with cost estimates.

Where one member reminded that they had “just” received the handout, other members appeared surprised by the report and posed the collective question to Blake, “We are repairing Staley?”

Blake assured the board members that a vote in favor of this resolution in no way committed the district to those costs, the related repairs or even to repairing the existing building versus opting for new construction. He explained that an assessment and cost estimate were required to accompany this type of resolution and reminded them that they had considered the same type of resolution with the same title in connection with Clough Elementary School not that long ago.

“It opens the gate for discussion,” said Blake.

Member, Paul Hagerty asked Blake to clarify the definition of “contingency” in the context of the resolution. Blake explained that any work ultimately approved, whether it be repairs to the existing building or new construction, would be considered an “emergency project,” as it would have been triggered by the flooding caused by a weather event. Designated emergency projects are not eligible for bond funding so any monies used to address them have to come from the general fund. He went on to say that the State Education Department (SED) would be engaged with regard to
accessing needed funds.

“Air quality is not considered damage,” Blake clarified. “This estimate only deals with damage.”

Blake confirmed that damage to the interior of Staley was primarily limited to the school’s boiler room and the equipment contained therein. Blake specified that the water came into the boiler room through a cross basement wall.

Members asked for clarity around references to damage in two of the Staley classrooms, specifically Room 201, and why that had not been reported together with the damage to the equipment in the boiler room? Blake explained that, immediately after the flooding and when district maintenance staff assessed the damage, Room 201 had not yet flooded. Two days later, when floodwaters that had extended out to the street then receded back toward the river, those waters caused flooding in that room.

Purchase and installation of “affordable classrooms”

Board member Joe Mellace asked for clarity around the “affordable classrooms” included in the costs advanced by LaBella. Blake shared that these mobile structures would afford the district the temporary space needed to relocate the staff and students of Staley until a suitable building was ready.

He explained that they were exploring what administrative space within the other elementary school buildings could be temporarily housed in these structures so that they could keep as many students inside the main school buildings as possible.

With regard to the inclusion of the “affordable classrooms” in LaBella’s report, Blake explained that, because temporary classrooms are considered a “project,” they require architectural plans to be prepared and provided before they can be funded and put into place.

“We can’t begin that work,” said Blake, “without passing this resolution.”

Board members remained visibly conflicted as they continued to pour over the information, pressing Blake again to assure them that voting for this resolution did not commit the district to a decision to repair Staley or to the proposed cost estimate. The superintendent assured them that the scenario of any change in needed repairs or cost thereof would be accommodated with the approval of an amendment to the resolution before the board in the special session.

Blake said the “next step,” after approving the resolution, would be the engagement of the SED to work with LaBella, together with continued discussions with the Board of Education regarding what the district will ultimately do — repair or replace Staley? The resolution, Blake said, “simply allows us to begin to work with the SED.”

As for a timeframe when district faculty, staff, parents and students could look forward to a decision around the fate of the Staley school, Blake said the focus, for now, was putting the needed resources in place to allow for the effective relocation of Staley students and staff and beginning the new school year, starting on Sept. 13. “There will be no conversations about what to do about Staley for several months,” said Blake. “We want to get all of our ducks in a row.”

When pressed to comment on whether the resolution could be inferred to confirm that the district is now considering repairing Staley, where it previously reported the decision to permanently close the school building, Blake repeated the resolution does not bind the district to the repairs and that no conclusions had been drawn yet on the ultimate path forward.

Blake finally crystallized the current status of Staley to say, “Staley is closed ... for the school year.”

A Rome man and his visiting grandson have been charged for illegal deer hunting, according to the state Department of Environmental Conservation. Authorities said the New York DEC received reports on …