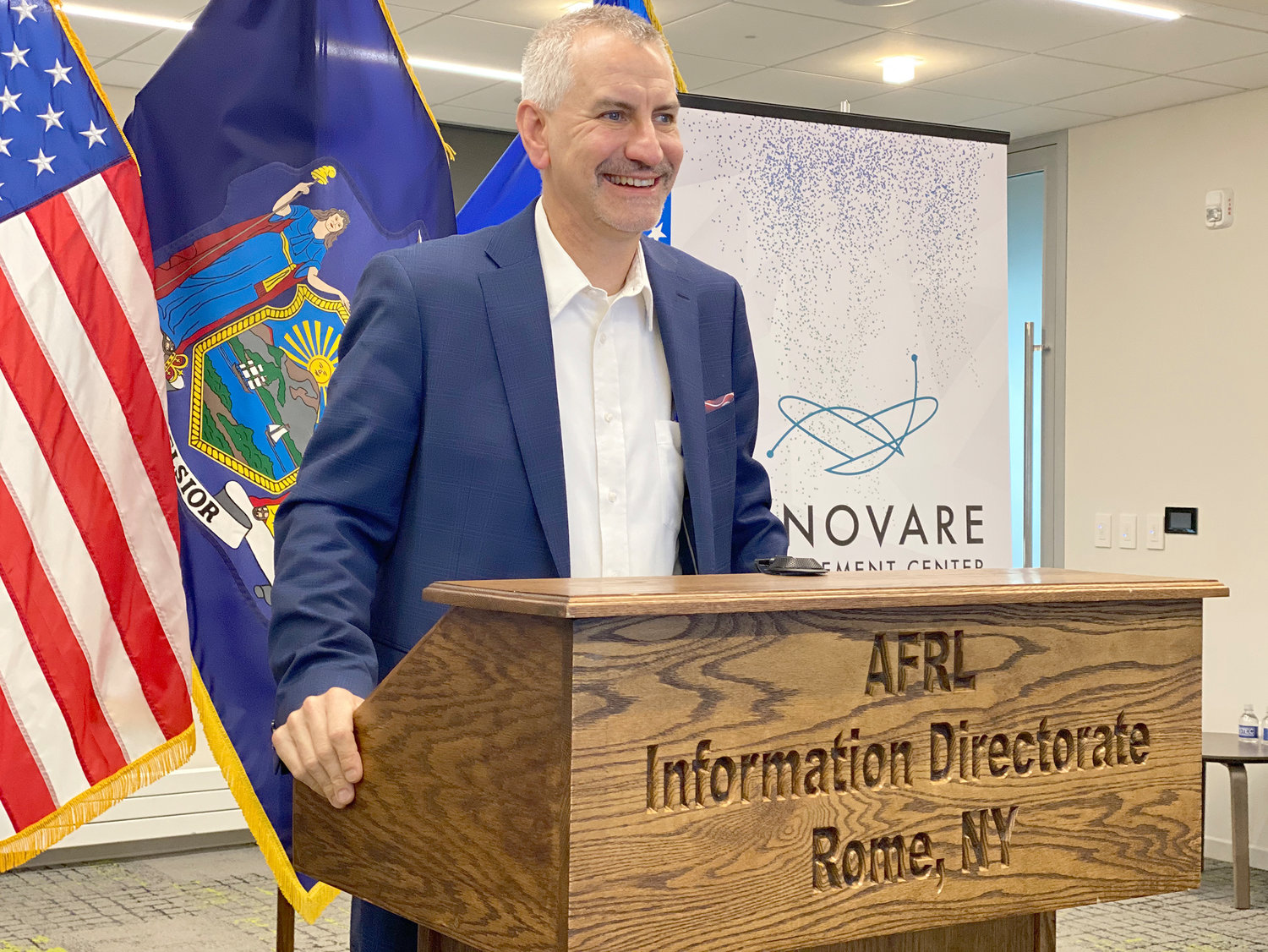 EMCEE FOR QUANTUM EVENT — Dr. Michael Hayduk, deputy director of the Air Force Research Laboratory Information Directorate which also is known as Rome Lab, prepares for a Virtual Quantum Collider 2.0 event for which he was the emcee. Held earlier this month, the virtual event included awards totaling $35 million for small businesses relating to quantum technology, plus several speakers from around the country.
(Photo submitted)
Posted Wednesday, December 16, 2020 12:00 pm

Awards to 15 small businesses, totaling $35 million in U.S. Air Force funding, were announced by Rome Lab during a recent Virtual Quantum Collider 2.0 event involving quantum research and technology, according to an announcement Monday.

The Phase II Small-Business Technology Transfer awards were for proposals covering any of four quantum topics including timing, sensing, computing or communications. The two-day virtual event was earlier this month.

Companies were selected for the funding awards based on evaluation and criteria by researchers and scientists at Rome Lab, formally known as the Air Force Research Laboratory Information Directorate. The Phase I awards were presented in June at an initial virtual quantum collider event.

Among companies receiving the recent Phase II awards by category, including multiple selections for some:

“We want to get dirt on it and get it out in the field. If you are an amazing scientist or engineer, or are supporting a company that’s pushing boundaries of research, you’re a rock star in our world, and forums like this really help us put that spotlight on building momentum for this important area of research,” Roper added.

The event also featured astronaut-in-training and global TEDx speaker Alyssa Carson, along with her father Bert Carson, for a keynote session titled, “Walking on Mars with Alyssa & Bert Carson: A Fireside Chat That Is Out of This World.”

They spoke about inspiring a future STEM-smart workforce and welcomed a Q&A session from the audience; STEM refers to science, technology, engineering, math.

“Becoming an astronaut, really that is a very long-term goal,” said Alyssa Carson when asked for advice for someone interested in becoming one. “What would you actually want to do in space? And then try to figure out what kind of career can match that and how does that career play out on Earth.”

Bert Carson discussed fostering his daughter’s passion for space at such a young age, and offered advice for parents.

“There’s so much available out there…It didn’t cost anything but hard work,” he said. “You have to be willing to put in the hard work. You can’t just have it be given to you, because then it’s not worth it.”