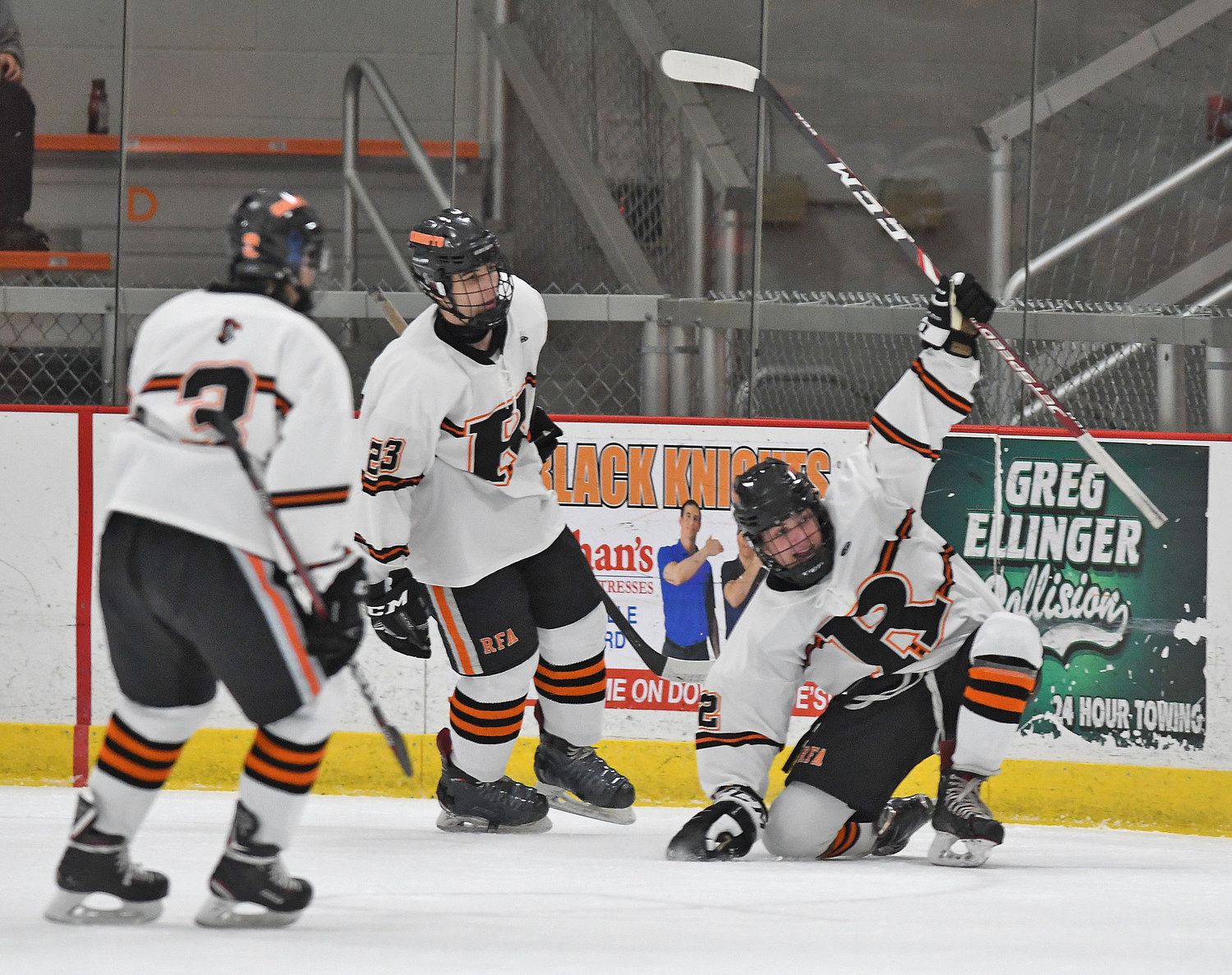 POWER-PLAY GOAL — Jake Hall, right, celebrates his goal in the first period of Tuesday’s 4-2 win over Christian Brothers Academy—Jamesville-Dewitt at Kennedy Arena. Hall added an empty-net goal to put the game out of reach. With him are Kyle Lubey, left, and Griffin Eychner.
(Sentinel photo by John Clifford) 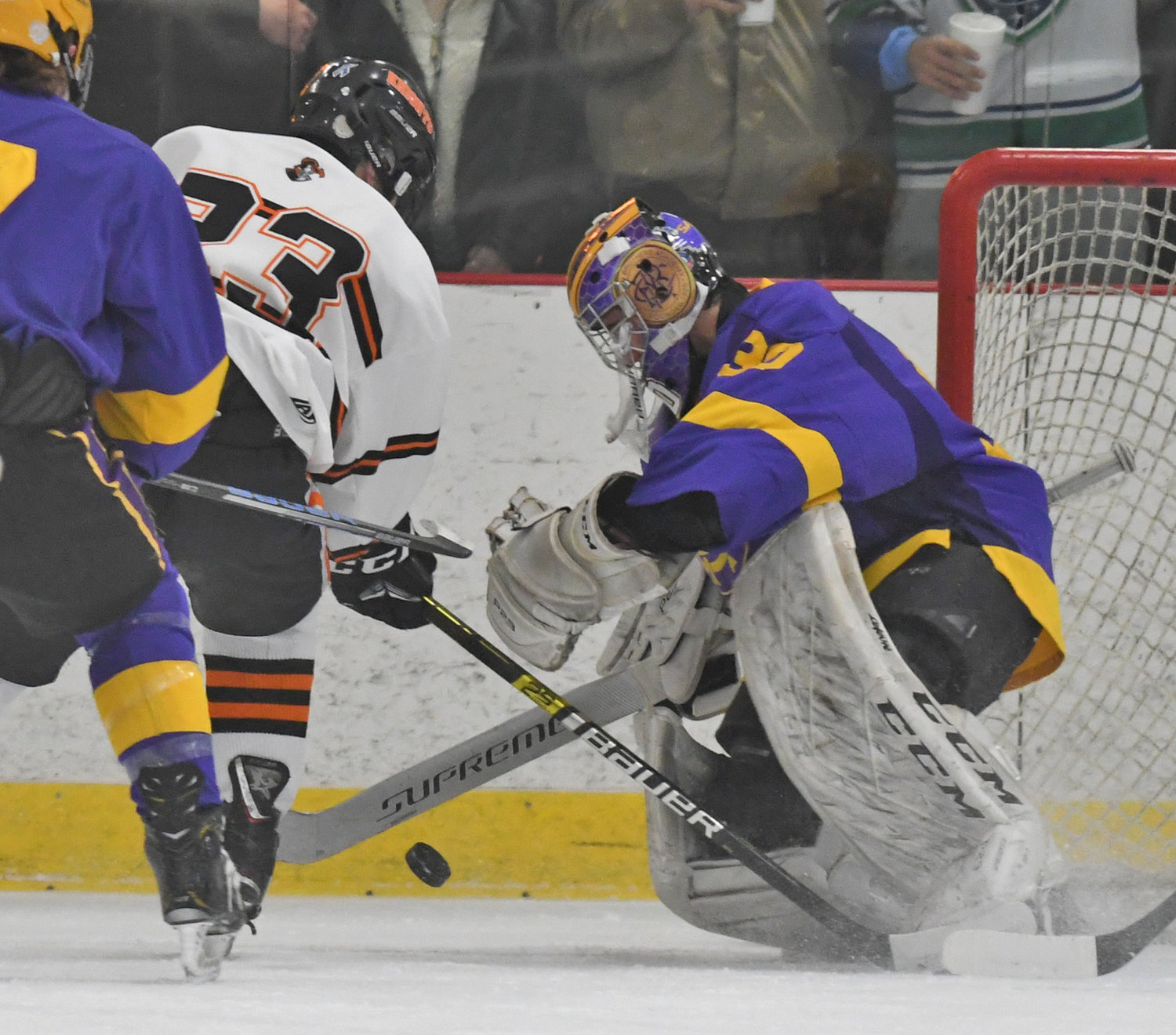 ON THE DOORSTEP — Griffin Eychner of Rome Free Academy tries to get a stick on the puck before it is corralled by CBA goalie Joe Salvador Tuesday night at Kennedy Arena. Eychner scored a late goal to give RFA a 3-2 lead. The Black Knights went on to win 4-2.
(Sentinel photo by John Clifford) 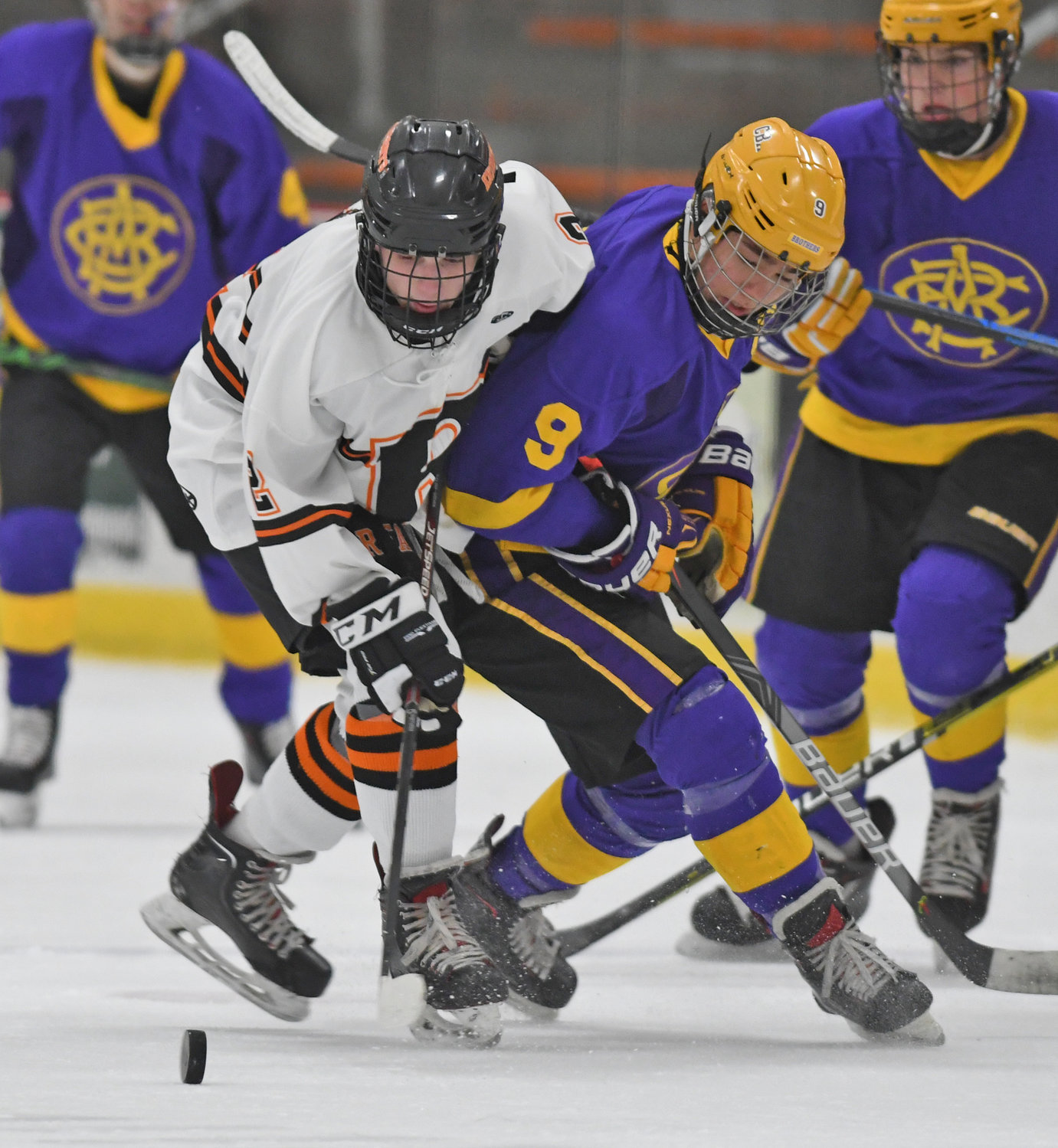 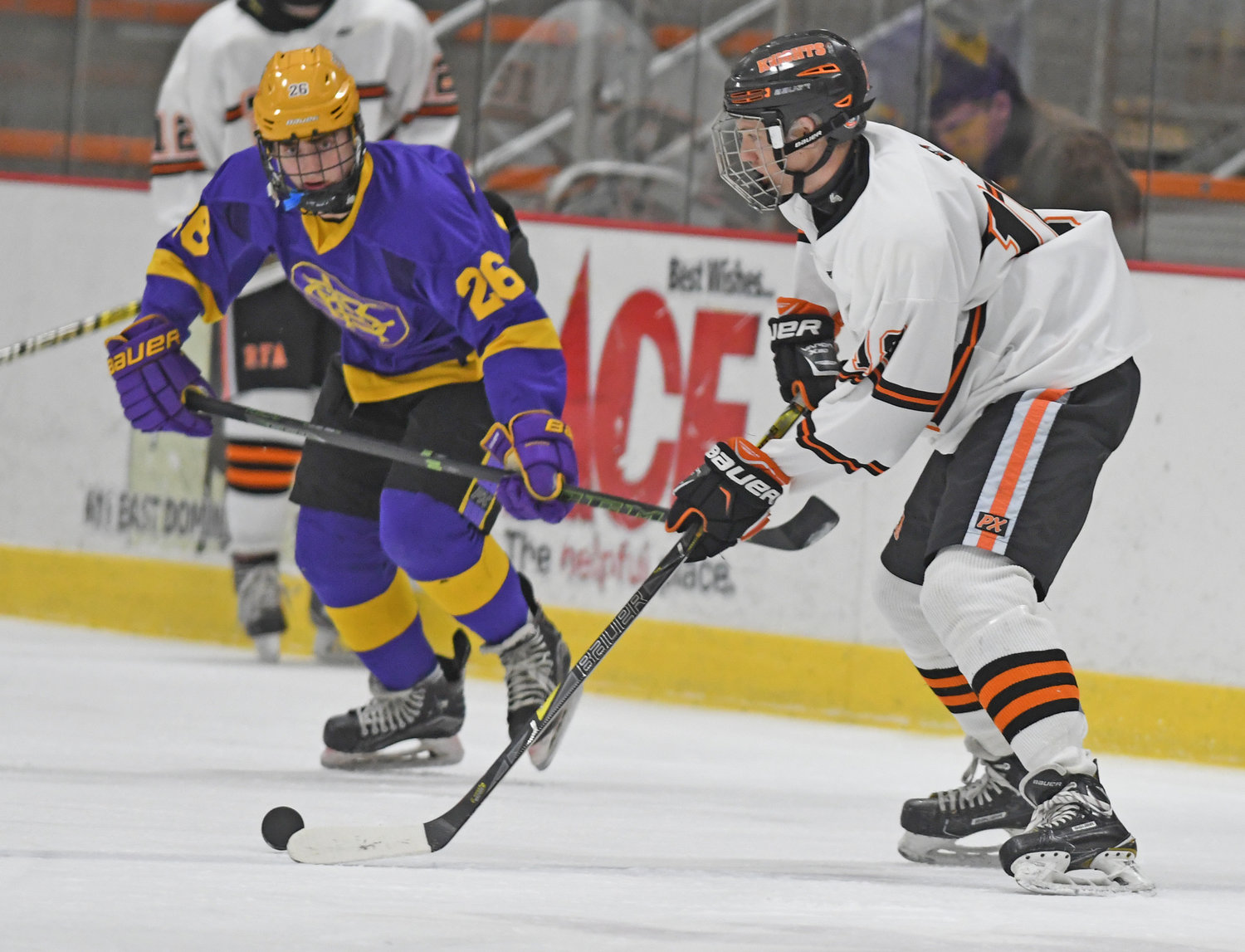 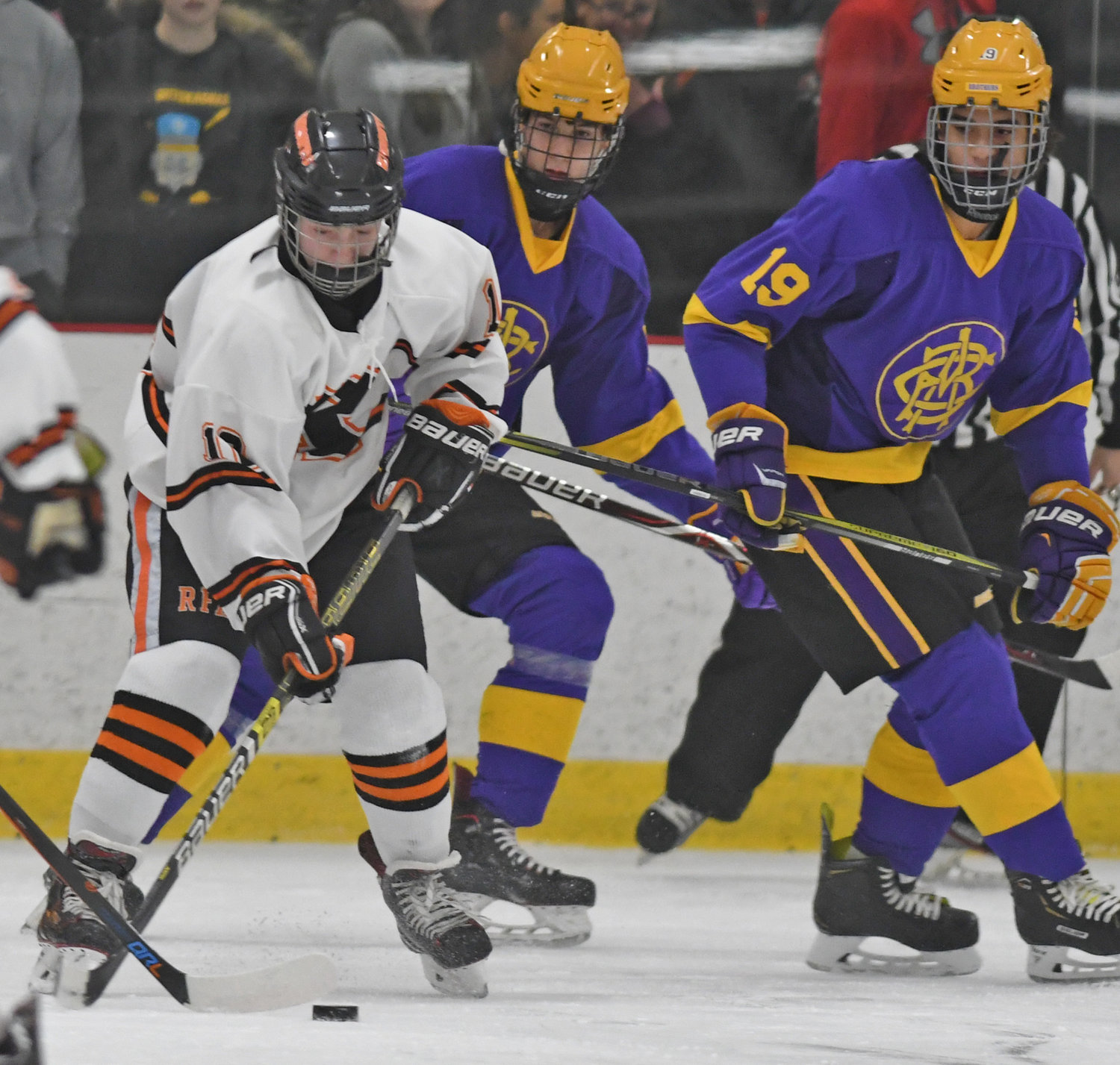 The Black Knights won 4-2 over Christian Brothers Academy—Jamesville-Dewitt. Jake Hall opened the scoring, then scored on an empty net to seal the win.

RFA struck first with just over three minutes left to go in the first period.

While on the power play, Kyle Lubey cranked up a slap shot from the left point that was saved by CBA goalie Joe Salvador. Hall was on the doorstep and fired home the rebound for a 1-0 lead. Lubey and Eychner picked up assists.

CBA would rally with two goals in consecutive shifts in the second period to take a 2-1 lead. Brackton Bowler scored on the power play with assists by Simon Lesser and Tanner Burns with 11:04 left in the middle frame.

RFA goalie Isaiah Nebush was unable to freeze the puck during a wild scramble in front of his net and Bowler was able to push it across the line to tie the game.

On the next shift, 20 seconds later, CBA captain Kodi Dotterer gave them the lead on a shot moving right to left. Lesser assisted on that score as well.

“The way we’re working the puck,” he said, “gives us the advantage.” He said Lubey has been a key component. “He can read the defensive diamond or box, whatever they give us.”

As RFA began its man advantage, the referee waved Hall out of the face off circle and freshman Jake Premo took over on the draw. He won it and wired a rising wrist shot that beat Salvador three seconds into the power play for an unassisted goal to make it 2-2.

Nowicki said the main power play unit was tired out, so his message to the second unit was: “Gimme 15-20 seconds. Fortunately they only needed five.”

RFA looked to score a third power play goal when CBA took a penalty with 6:32 left in the game.

But down a man, CBA went on a shorthanded two-on-one that was snuffed out by Nebush to keep the game tied. “He’s doing a great job for us,” Nowicki said of Nebush.

On the shorthanded save, he noted that the defense played it correctly and Nebush “made a great save.”

The turning point came with just over two minutes left.

Russell spotted a loose puck near the right half wall and raced up to take possession. He gathered it above the face-off circle and got off a wrist shot as a CBA defender rushed at him.

The shot was deflected by Eychner right in front of Salvador and into the CBA net with 2:11 left in the game. Russell and Lubey earned assists on the play.

“When a defenseman comes down the wall,” said Nowicki of Russell’s play, “we tell them, ‘If you’re going to come, you better not get beat.’”

“Do I go? Do I wait?” Russell said he asked himself. He said he had to think about the consequences of not making the play. But, he said, knowing he could rely on his teammates he went for it. “I just wanted to throw it down there.” He put a shot on goal and let the forwards take it from there. Which they did.

CBA pulled the goalie to get an extra attacker, but with 11 seconds left Hall scored on the empty net to secure the win. Lubey assisted again.

“They ran three lines at us, and obviously that top line is one of the best we’ll see,” Nowicki said. “We cut down on the turnovers in the third. It’s a work in progress.”

Russell and Hussey have been trying to show the rest of the young and inexperienced defenders the way early this season. “The upperclassmen, if we push the underclassmen...it really makes everything smooth.”

Nebush made 28 saves to earn the win. Salvador stopped 14 shots for CBA in the loss.

RFA will get a major test Friday when it hosts defending state champion Syracuse at 7 p.m. at Kennedy Arena.

The Clinton boys hockey team beat Oswego 4-2 on the road to improve to 1-2.

It was the Warriors’ league opener.

In goal for Clinton, Josh Trask stopped 19 of 21 shots to get the win.