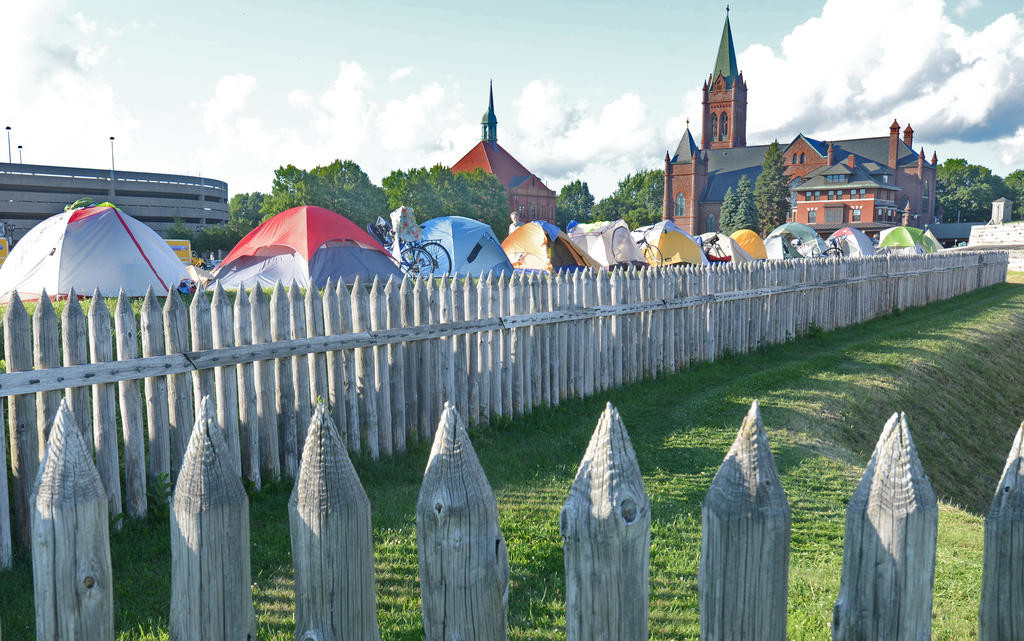 TEMPORARY TENT CITY — Bicyclists’ tents lined up around Fort Stanwix National Monument Thursday evening as about 500 riders arrived in the city as part of Cycling the Erie Canal. The annual ride from Buffalo to Albany includes a stop in Rome, where cyclists can enjoy the YMCA, local restaurants or just a relaxing spot on the grass in downtown. 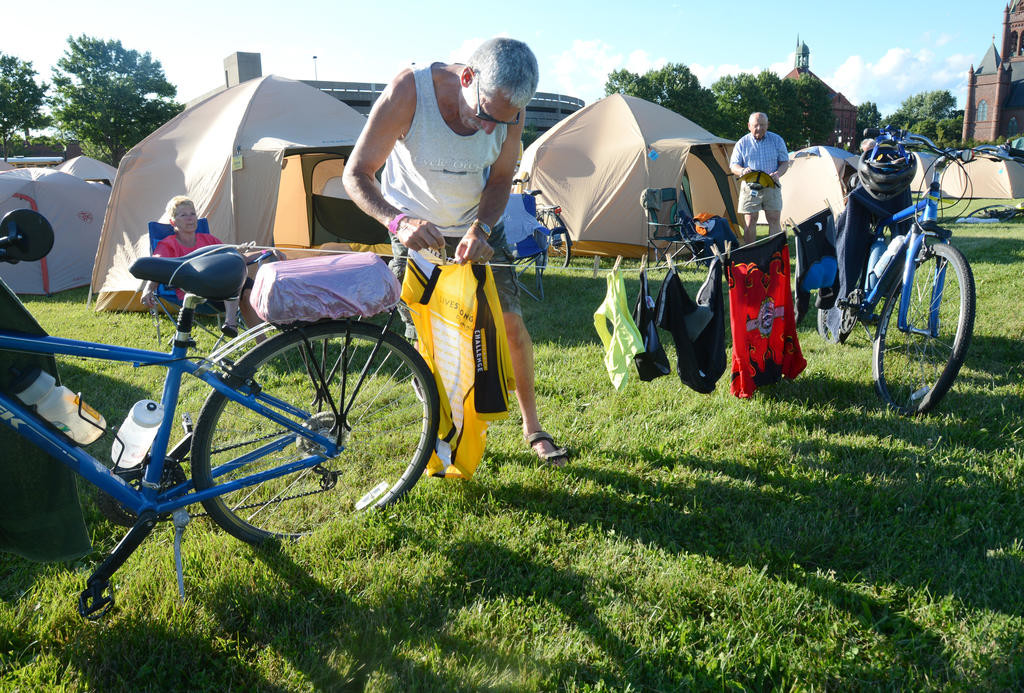 IMPROVISING — Dan Voorhees hangs bicycling clothes between bikes after he and his wife Sandie Voorhees got caught in a downpour Thursday. The Voorhees are from La Pine, Ore., where they said the most popular tree is a La Pine tree. In the background at right is John Hales of Chicago. More than 500 people aged 9 to 90 from all over the world were at the fort on their eight-day, 400 mile trip across the state on the 16th Cycling the Erie Canal Bike Tour. 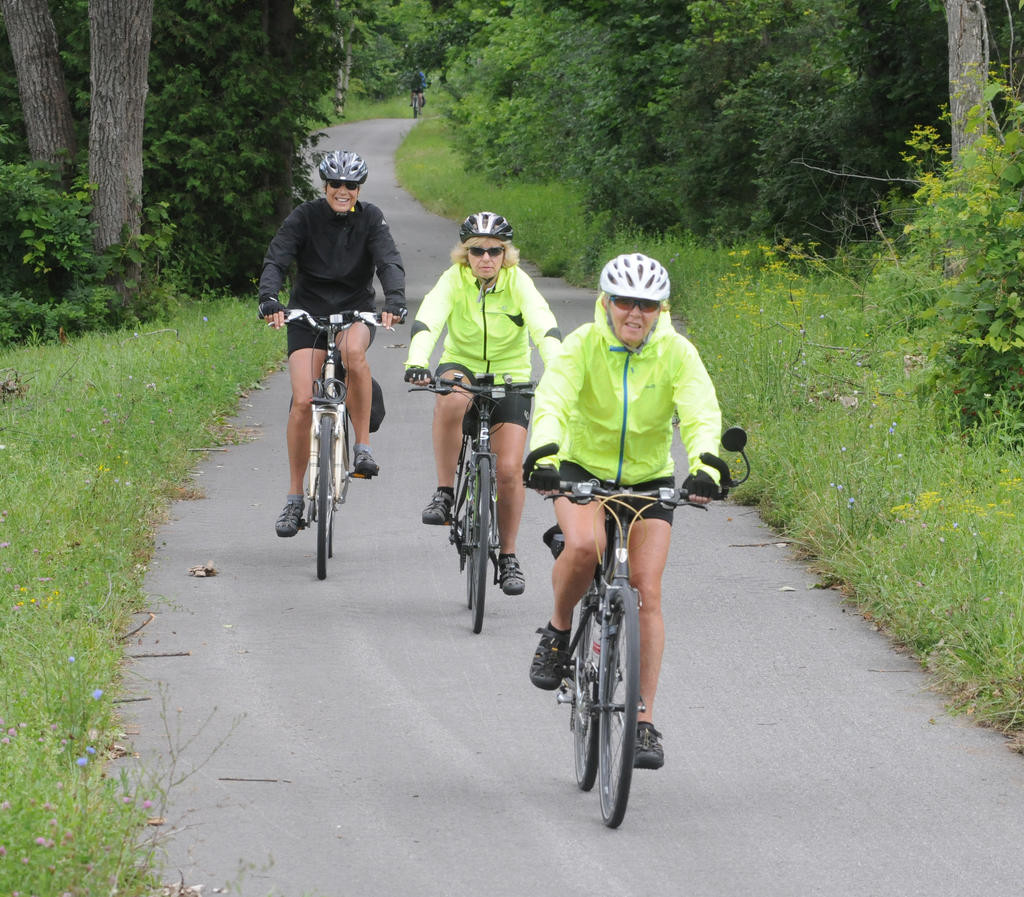 EASTBOUND — Cycling the Erie Canal participants travel east along the canal on their way to Rome Thursday. These riders are from Pennsylvania. 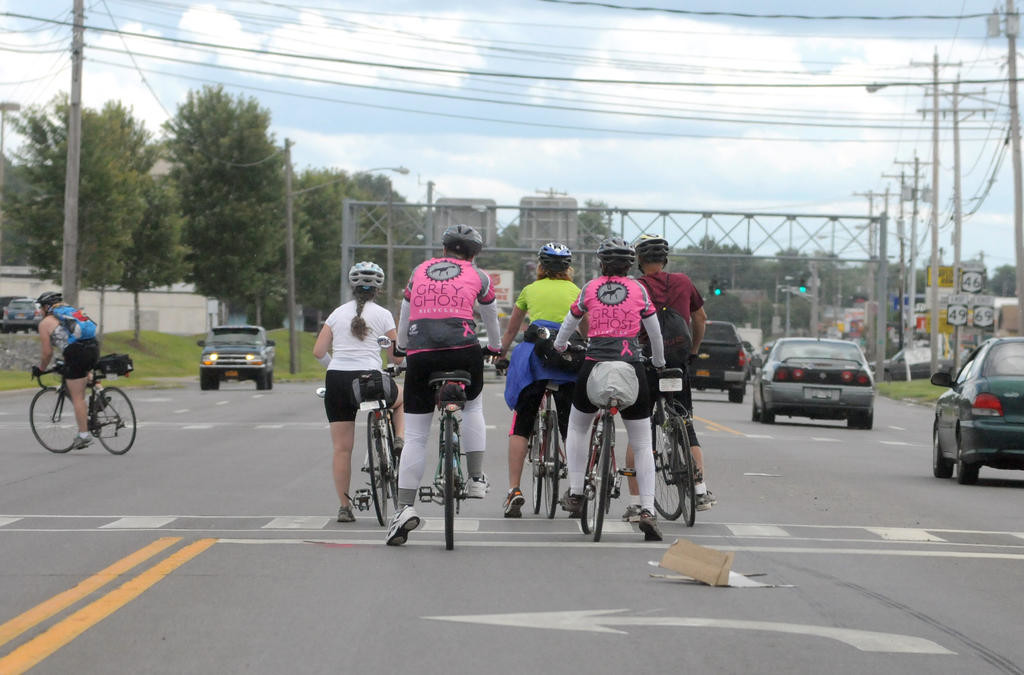 INBOUND — Bicyclists negotiate left hand turn from Erie Boulevard West onto Gifford Road Thursday as they enter the city as part of the 16th annual Cycling the Erie Canal. 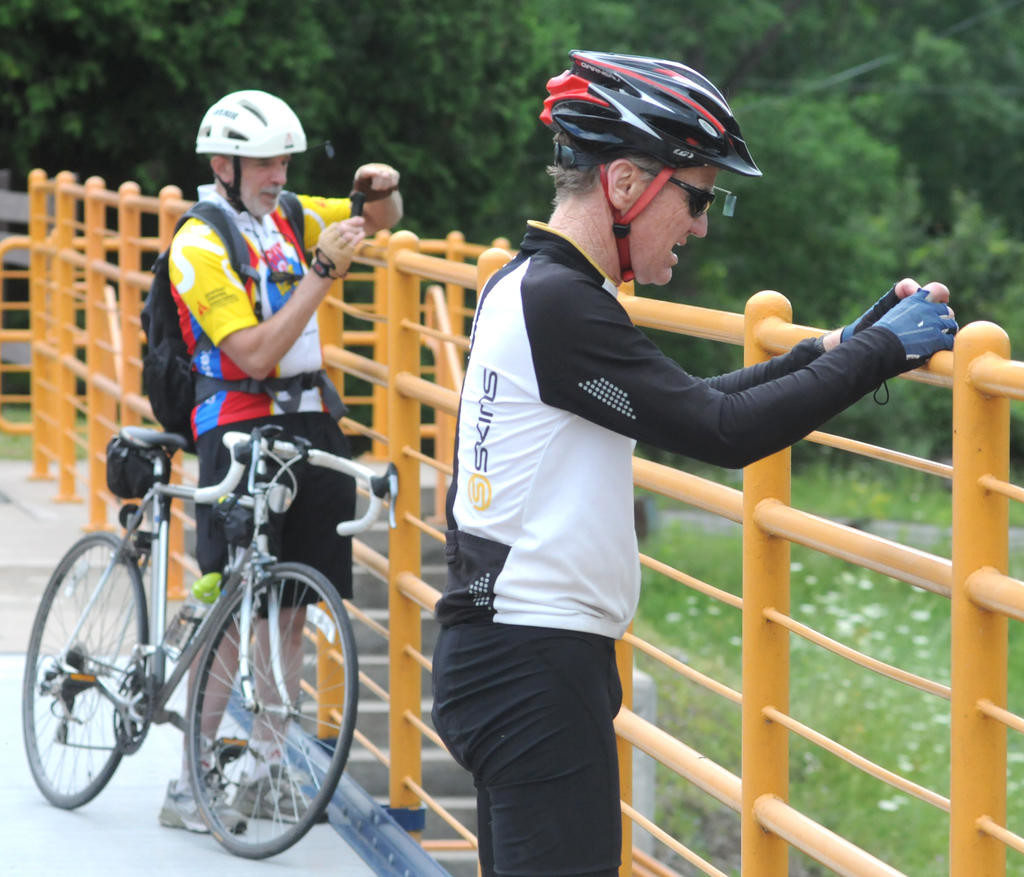 CANAL VIEW — David Sharkey of Rochester, left, and Greg Farmer of Boise, Idaho, take pictures from the pedestrian bridge crossing over Lock 21. Many Cycling the Erie Canal riders took a break at the lock before pushing east to Rome Thursday. 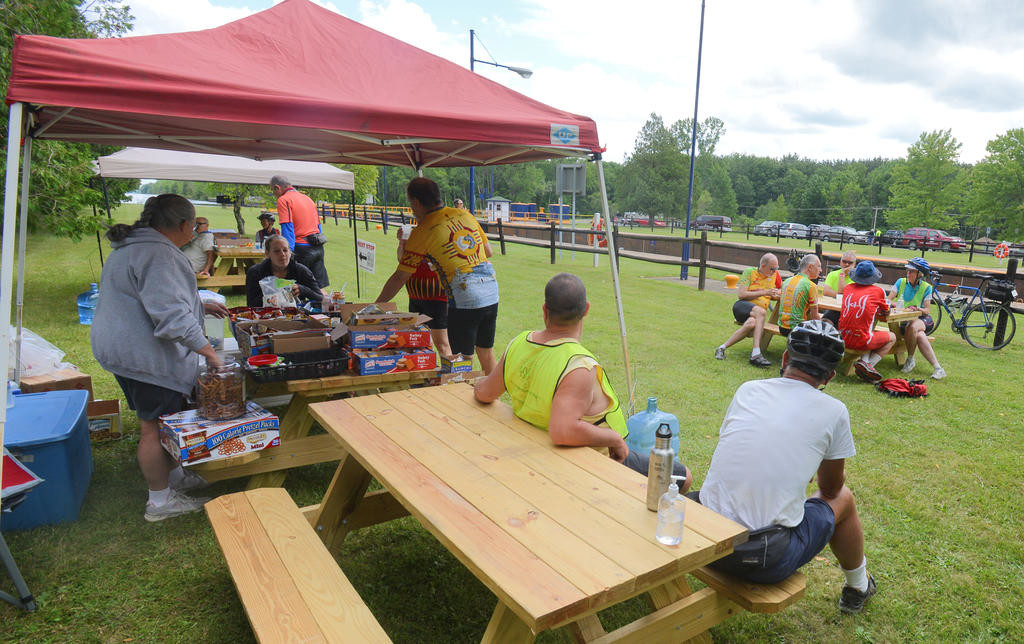 SNACK BREAK — Bicyclists participating in Cycling the Erie Canal stop for snacks at Lock 21 in New London on their way to Rome Thursday, where they spent the night on the grounds of Fort Stanwix National Monument. They departed this morning for Herkimer County. 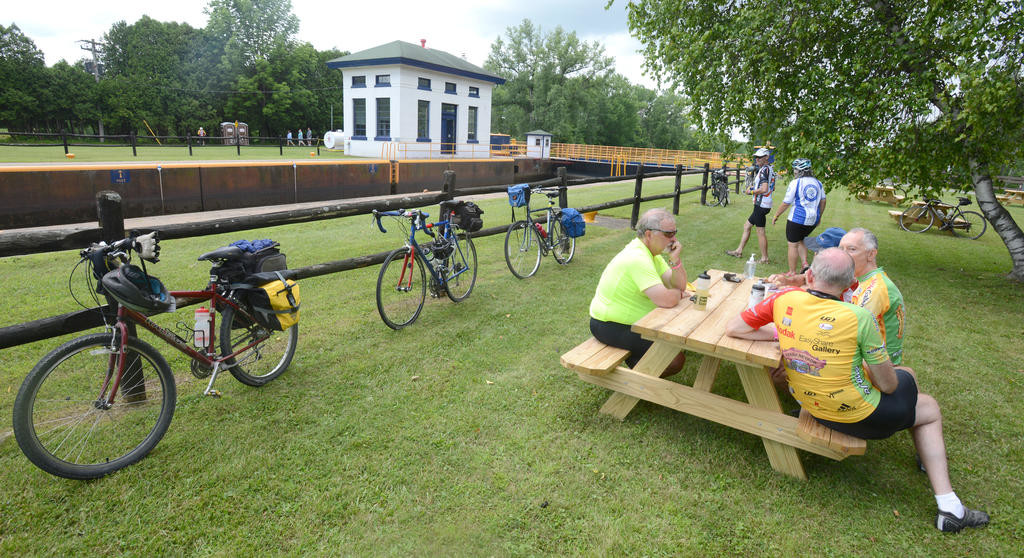 DOWN TIME — Bicyclists relax in the picnic area at Lock 21 in New London Thursday. Little breaks like this punctuate the 400-mile ride from Buffalo to Albany that started last Sunday and ends two days from now. 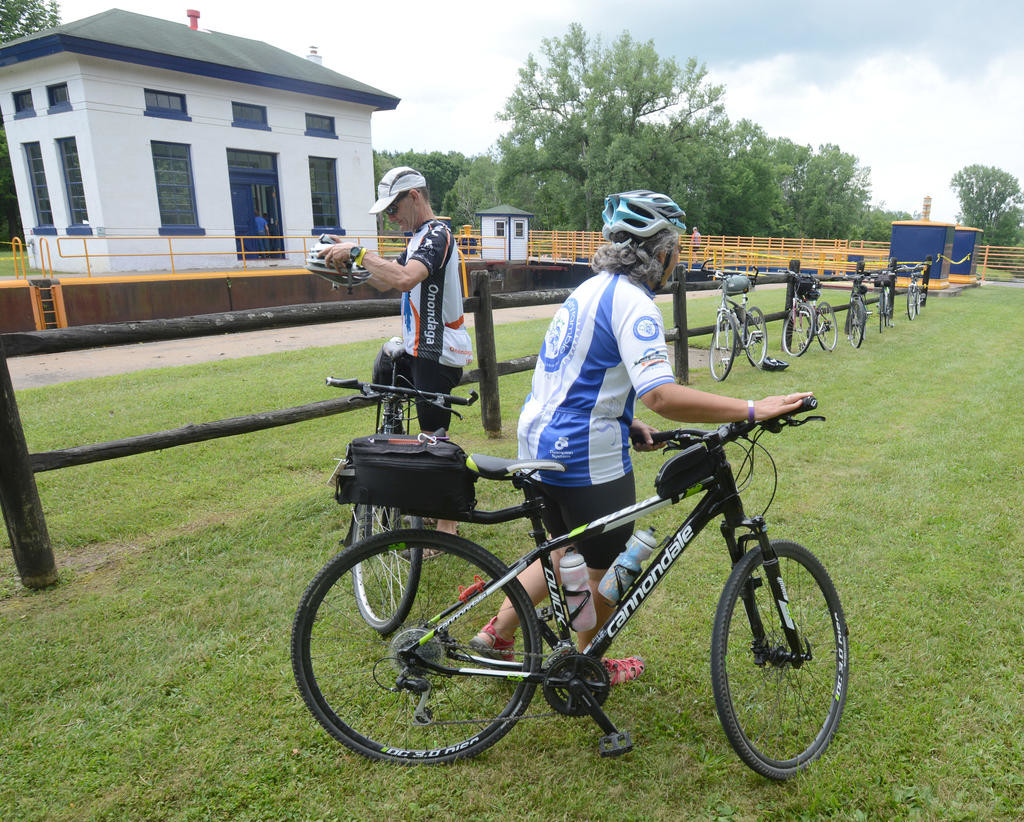 BACK TO THE BIKES — Gail and Mark Roemer of Camillus prepare themselves and get their bikes ready after a stop at the Lock 21 rest stop along the canal trail. About 500 riders rode the fifth leg of the eight-day ride Thursday, a stretch from Syracuse to Rome.
Previous Next
Posted Friday, July 18, 2014 4:00 pm
NORM LANDIS

Here’s the long and short of it on the 16th annual Cycling the Erie Canal — for some like the first-timer 9-year-old from Brooklyn it’s a big thing and for others, well, not so big. Although some got caught in rain Thursday, most were enjoying the sunshine in Rome as they set up camp on the lawn at Fort Stanwix.

Some have a lot more experience, like people from Rochester and Kentucky doing the trip the third time, or the Boston biker on this route the fourth time coming up on 1,500 bike miles this year when he gets to Albany in a couple days, or the volunteer on his sixth straight trip.

But these eight days are jut a bit part of the 10 1/2 month excursion by Peter Dudfield bicycling around the world — the circumference is more than 24,000 miles. He’s in it for the money, but not for himself. He’s raising donations for the International Disaster Fund of the British Red Cross. So far he’s up to about $20,000 U.S. There’s a donations link at the bottom of his website www.peterpedals.co.uk After the Erie trip ends, he’s headed toward New York City to fly to Morocco before returning to England by October to work on his PhD in math and physics.

So far he’s had about 10 flat tires and is on his third set of tires (“the rumble strips wear them out,” he said.). He said you have to clean and take care of your bike, noting that on this trip there are often hoses for riders to clean their rides.

The riders are from all over.

Several are from Rochester or that area.

A mother-daughter (going to be a high school junior this fall) duo from Brockport.

Dr. and Dr. from South Australia. (They courted on bicycles.)

The retired state police scuba divers (Ford from Troop D and Bloom from Troop E -- who admit to having been a little competitive in their former jobs) who had been bicycling 21/2 years and a little over a year, respectively.

And organizers said Israel is also represented on the trip

Covering between 40 and 60 miles per day, cyclists travel along the Erie Canalway Trail, which is three-quarters complete.  When the Trail is finished, it will be the longest multi-use trail in the United States. A recent study shows that the Trail annually receives more than a million and a half visits and generates an economic impact of $253 million.

The cyclists ate in area restaurants, or had deliveries to their campsites, last night, then after breakfast at the Y they were off to  Canajoharie for the night, then their final two days on the trail.

Some of the crew people will have a week off and then work on a similar trip down the Hudson.