$13M schools project to go before voters in Oriskany 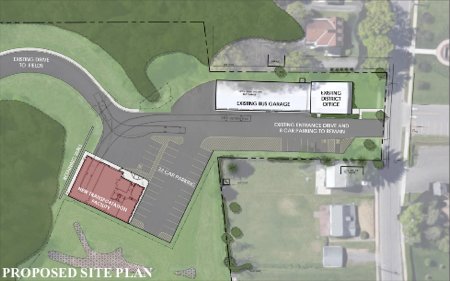 NEW BUS GARAGE PROPOSED — According to a project overview on the school district website, www.oiskanycsd.org, Oriskany voters will have their say on a $13 million project which includes work on both the N. A. Walbran Elementary and the Junior/Senior High School, as well as the district office site to include a new transportation facility/bus garage. The project, officials said, would receive 81.7% state aid funding and be done at no additional cost to district taxpayers.
(Illustration courtesy Oriskany Central School District)
Posted Monday, November 8, 2021 1:48 pm

ORISKANY — Oriskany Central School District residents will vote on whether to approve a referendum for a $13 million school capitol improvements project to include a new bus garage in the first phase of construction, from noon to 7 p.m. Tuesday, Dec. 14.

A public hearing on the proposed project will be held at 6 p.m. Tuesday, Dec. 7 in the high school auditorium.

Building condition surveys were completed last year, along with an update to the school district’s Capital Facilities Plan in 2020-21. MARCH Associates Architects & Planners, PC, of Utica, met with teachers in May, and meetings with the district’s fiscal advisors also happened that month. The scope of the work was finalized last month.

According to the project overview, the $13 million project is to receive 81.7% state aid funding and be at no additional cost to the local taxpayers. Work will be included for both educational buildings: N. A. Walbran Elementary and the Junior/Senior High School, as well as the district office site to include a new transportation facility/bus garage.

Phase 1 of the project, to include the Transportation Center/Bus Garage, will go out to bid in July of next year if the project is approved, with construction beginning in August and commencing through June 2023.

Phase 2 will include all the work at the school buildings, and go out to bid in March 2023, with construction beginning in May and commencing through November 2024.