Walters brings energy and dedication to Chamber of Commerce 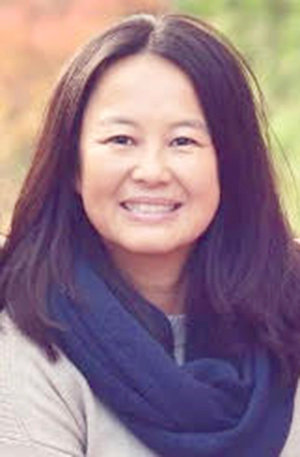 CLINTON — For the past five years, Jackie Walters has been the executive director of the Clinton Chamber of Commerce. In that time, she’s made some great strides for the community. A community she admits she stills feels somewhat like an outsider in.

But the challenges it takes to come in from another community and take the reins of responsibility is not something new to Walters. In fact, she admits she’s faced challenges for almost as long as she can remember.

“My family, the Lee’s, who are Hmong (an ethnic subgroup of the Miao, or Chinese people) and natives of Laos,” said Walters. “We escaped my home country to evade the Vietnam War when I was just about 3 years old. We crossed the Mekong River into Thailand and found shelter in a refugee camp for about eight months.”

No small feat when you come to understand Laos was the most heavily bombed nation in history from 1964-1973.

Eventually making their way to America, sponsored by a church in the Syracuse, they settled in Liverpool.

Growing up in the lakeside village, graduating from Liverpool High School, Walters (Lee) continued her education at Clarkson University were she earned a bachelor’s degree in civil engineering and met her future husband, Doug.

“After graduation in 1995 we moved to Boston ,” Walters said. “I found a job with a consulting firm that led me to working on ‘The Big Dig’.”

“The Big Dig” was a substantial project that rerouted Boston’s downtown traffic along the I-93 Interstate corridor under Boston Harbor and the harbor front district, in an effort to ease the flow of traffic during peak times of the day, typically morning and evening commutes. It has been described as one of the most challenging civil engineering projects to ever be attempted.

In 2001 her husband accepted a position with Deutsche Bank in London, England. They lived in the city of London for five years. And while abroad the Walters were blessed with two children, a daughter, Maddie, and a son, Ollie.

With the children came a decision of whether they would be schooled in England or America. The couple decided to bring the children to America, and Doug was transferred to New York City with Deutsche Bank. Living in New Jersey, Doug commuting, Walters became involved with the Parent Teachers Association, or PTA and did some work for the Chamber of Commerce in the Garden State.

Eight years of commuting from New Jersey to New York City could wear anyone down, and for Doug it was time to change jobs again — enough was enough. Doug’s family lived just outside of Albany and Jackie’s family still in Liverpool, they felt locating somewhere in the middle would be suitable.

“My husband interviewed from Albany to Rochester,” Walters said. “We hoped he could find something to put us close to the children grandparents. We were fortunate enough the company Strategic Financial Services in Utica offered Doug a position.”

By that time, 2014, Walters had a sixth-grader and fourth-grader and Walters admits she’s the type of mom who wants to know whats happening. So, as in New Jersey, she joined the Clinton Parent Teachers Association (PTA)

“I felt with the middle school things are very hands off, so this was a way for me to get involved,” Walters said. “The PTA was bigger in Jersey than in Clinton so I suggested a few ideas that the people of Clinton seemed to appreciate.”

One of the first things Walters did was develop a PTA weekly newsletter.

“The elementary school has information in there as well as the middle school and high school,” Walters said. “We also included community events, the Kirkland Town Library, the Kirkland Art Center, The Historical Society and even some of the chamber stuff.”

By 2015, Walters was co-president of the PTA ,and around that time the head of the Clinton Chamber of Commerce, Ferris J. Betrus Jr. was getting ready to retire after serving nearly 13 years.

“I saw the listing come up,” she said. “I had some chamber experience from my time in New Jersey and the fact it was part time really appealed to me.”

“At one time someone told me they had around 40 applicants,” Walters said. “And while the job involves the Chamber, it also involves being hands on and making all the arrangements to put on the Farmer’s Market. And that’s a big chunk of my job.”

Walters admits with only 20 hours allocated for the position it’s not always easy to get everything she feels will benefit the community done in that span of time — especially with the Farmers Market to contend with. And while most weeks she goes over her allotted time, she ‘s more concerned with helping to make Clinton a beautiful place to live and visit.

Karen Ostinett, president of the Chamber of Commerce Board, noted “You have to have a passion for that position and she has done a stellar job.”

“She’s just incredible,” Ostinett said. “With her energy and dedication she’s increased the membership as well as being able to see the real issues of the community and what’s important. She’s concerned with how the chamber is viewed and makes sure it stays relevant to the community.”

Ostinett also said Walters is not alone in her quest for doing a good job.

“It’s not just Jackie, it’s her entire family,” Ostinett explained. “At all the events you see her husband and children out there with her pitching in. The whole board is behind her.”

While the annual Shoppers Stroll, Farmer’s Market, The Art and Music Festival and the Art Rocks celebrations were long established before her tenure, what is new under Walter’s direction is the creation of the Jingle Jog. Also, the corn hole tournament at the Art and Music Festival sponsored by Strategic Financial Services of Utica that raised money they donated to the Country Pantry. The pantry partners with local churches and the community to support families in need with nutritious food in Clinton, Clark Mills and Westmoreland.

“Spend some time with Mary Zimbler and the team at The Country Pantry and you will be moved as we were,” Doug Walters said. “They provide a critical service to the most vulnerable families in our community, and naming them the beneficiaries of our corn hole tournament is our way of saying ‘thank you’.”

While working with the PTA Walters had multiple opportunities to work with Clinton’s Superintendent of Schools Dr. Stephen L. Grimm. Including arranging the celebration after Clinton was named Kraft Heinz Hockeyville 2018.

“I’ve never seen before such a collaborative, cooperative way that all the communities work together,” Grimm said. “And I do see that Jackie in her position reaching into the schools and the other organizations is really the catalyst of bringing everyone together.

“For example, one of them is the Farmers Market, implementing the kids getting the coins and going around getting the vegetables. Plus, the PTA newsletter she created still goes on today. It’s probably some of the best communication we have in our school district.”

“She’s an absolute jewel,” Bellona said. “An exceptional advocate for our local businesses, and the village as a whole. When it comes to our Farmers Market, Art and Music Festival and Shoppers Stroll, it’s Jackie who makes sure everything is right.”